I Tot I Taw a Puddy Tat

Generally, Tuesday is shopping day and also has become TTT Day: Tuesday Treat Time for the kids.
It is usually something that I do on my own while Sue does whatever at home. This time, after I brought the groceries home, we decided to pick up breakfast and drive to our usual spot. Naturally, we took another photo of the pair of us in the car. Sue should have told me that my hat was somewhat askew. 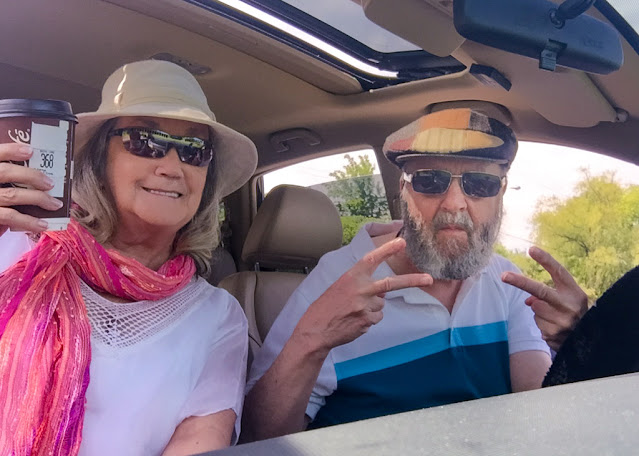 But then, I tot I saw a puddy tat.
I did see a puddy tat.
How curious! I had never seen a cat in the park before.
And then I saw another puddy tat.
They were with a man.
What?!
A man was walking with his two cats in the park. Unleashed!
The cats were still cat-like enough to wander hither and thither and not always come promptly when called, or rather whistled. But they didn't bound off either.
One particularly, got a bit lost beyond the bushes to the left, next to the water in the following photo. 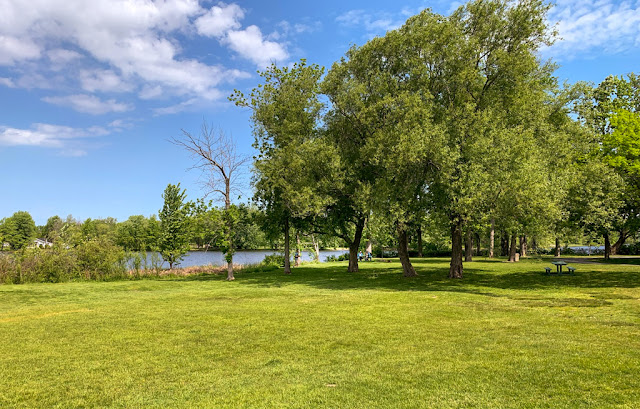 At one point the man had to locate the cat and carry it out of the bushes. Eventually, they wandered off toward the rest of the park on the right of the above photo. They are actually in the above photo, right about smack dab in the middle, but these are all distant phone photos, so you may have to take my word for it. If you could see the photo larger . . . wait, I will try to crop it for you. 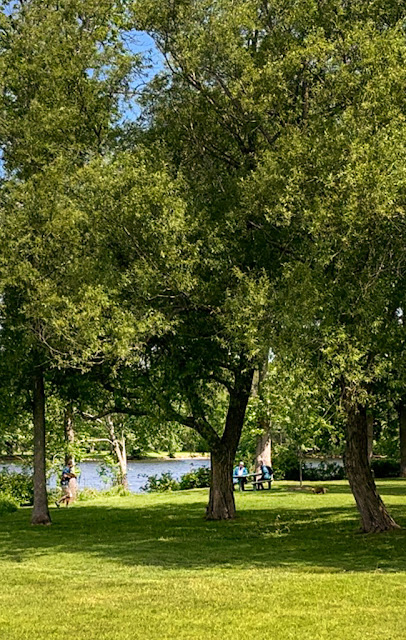 Can you see it? To the bottom left, he is carrying a cat. The other puss (off to the right) is about to investigate the ladies at the picnic table.
Sue and I were out of the car and walking in the same direction by this point. The trio was making pretty good progress now. They are in the centre of the photo. 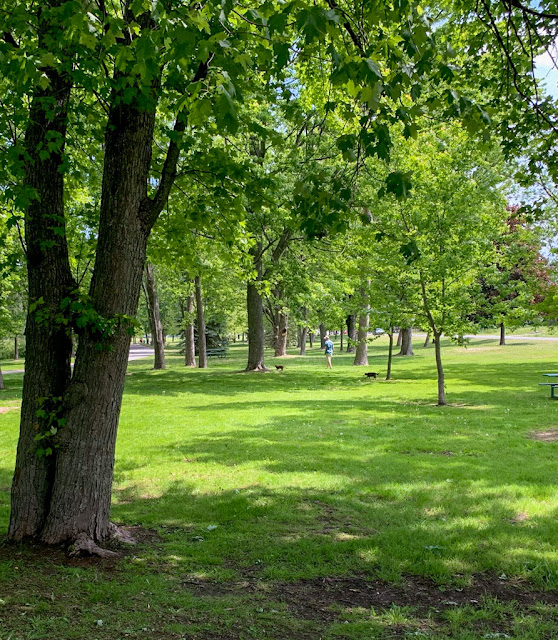 This is hard work for cats. They had to stop and rest. We caught up to them. 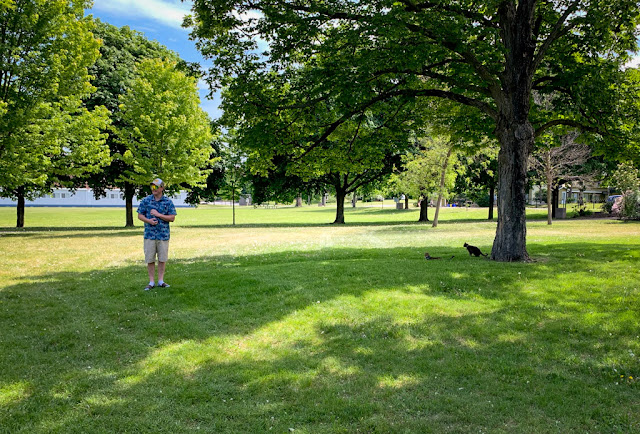 We had to investigate and have a chat. They are beautiful Bengal cats who walk with their human regularly. 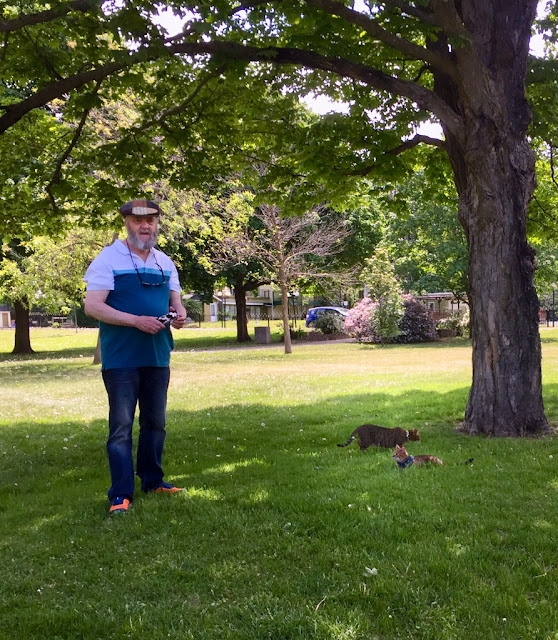 I petted this one. It took it calmly and as a matter of course. 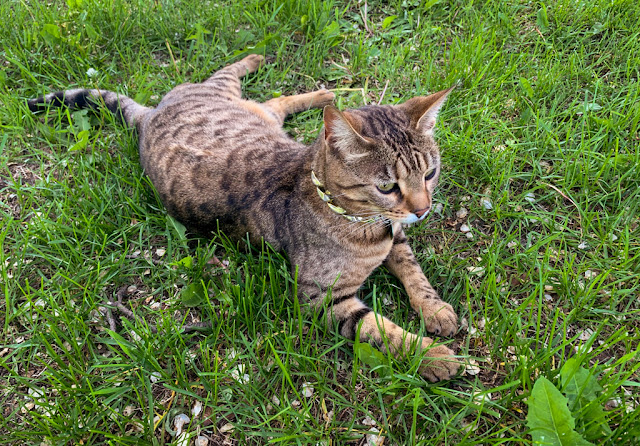 I was told that the other one was a bit skittier, so I just took a picture. What a beautiful creature! Look at those eyes and that glorious coat, which apparently, doesn't shed. 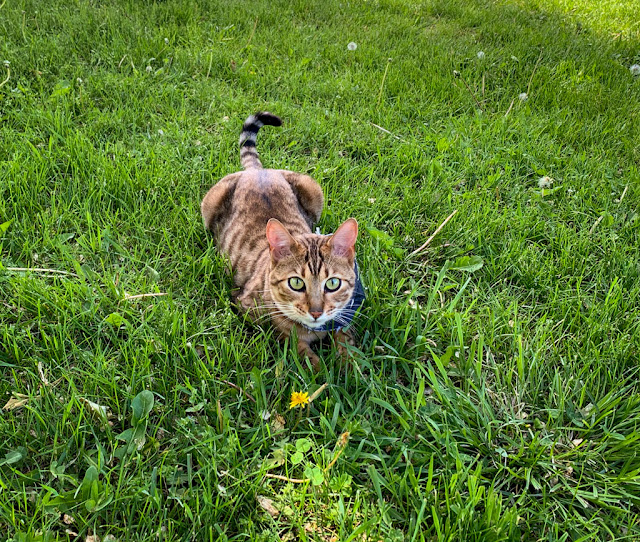 What delightful fun we had. It turned out to be Tuesday Treat Time, not just for the kids, but for us too.
I have only seen something similar once in my entire lifetime. It was one Halloween back in the 80s. A family was accompanied by their feline on their rounds. As far as I could see, the cat didn't go to the door, trick or treating with the kids, but when the family was ready to move on, they just told the cat to come along, and it did.
Go figure! It's not like any cat I have ever known.
And . . . as an afterthought, I put a few of the photos into a collage. Done now, for sure. 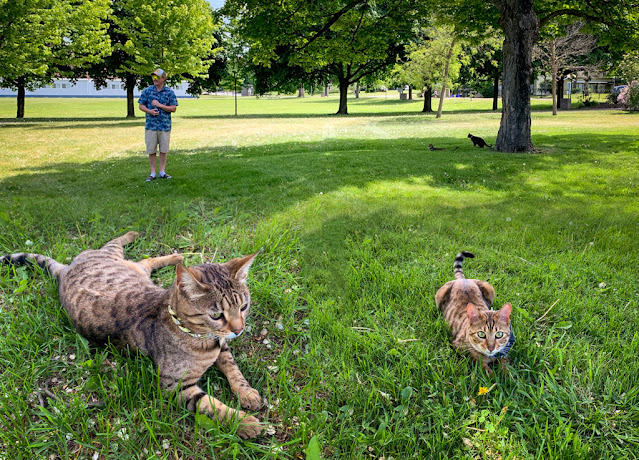 Posted by Anvilcloud at 6:50 am

Fascinating! A first for me. Thank you for sharing these gorgeous cats and their story.

Bengals are certainly a beautiful cat. What fun to watch & then participate with them.

They are beautiful! I'd be afraid of dogs in the park. We're happy walking in out forest. Where it is safer!!!

I have seen them walked on leashes, but never on their own like that. The owner must have quite a bit of faith in them.

The strangest thing I ever encountered was a man walking his pig. In the middle of a big city!

I've heard that cats can be trained...but they just don't want to. Cats that is. I've only seen them on leashes myself. What a wonder if I saw Bengal cats like that, I might have followed them home! I've never even seen a Bengal cat.

They are beautiful creatures, for sure. I never heard of anything like this before. I learned something today!

They are gorgeous - thank you for the share! I had a friend who had a Siamese cat that you could treat that way. Ruler of all he surveyed though.

A lovely spot for breakfast and to make new friends. Pretty cats.

What a wonderful day! Those cats are gorgeous.

Very cute! When I was photographing tulips there was a cat near the entrance to its property lapping up attention from passersby.

Those are exceedingly cute felines! They look both playful and cuddly (at different times of the day of course).

I had a cat once who followed me every day down the long driveway to the mailbox and back when we lived in the country. I could call him when I was going down and he'd come bounding up and walk near me...sometimes wanted a ride draped around my neck on my shoulders. But I would never have trusted to take him to a park like that. They are quite remarkeable cats! :)

They really are beautiful. I’ve never heard of a Bengal cat before and had to look it up.

This was vey enlightening perusing this blog. A particularly pleasant portrayal If you might want read more about these themes , view toyger cat