Fathers Day Part Two at the Park with the Clan

We lucked out with a gorgeous day in which the ferocious winds of the previous day calmed down. It was hot enough, but we were perfect in the shade of the trees by the river. 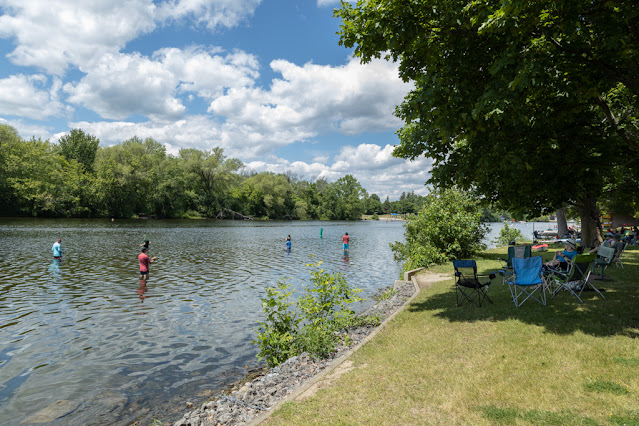 There were people fishing right in the river. We realized that people could fish without a license on this weekend. We set up five chairs (to the right, above) and waited for Sha and the kids. The park was crowded, relatively speaking, but there was a lot of space between the family clusters, and no one group was overly large. It was pretty perfect, really. 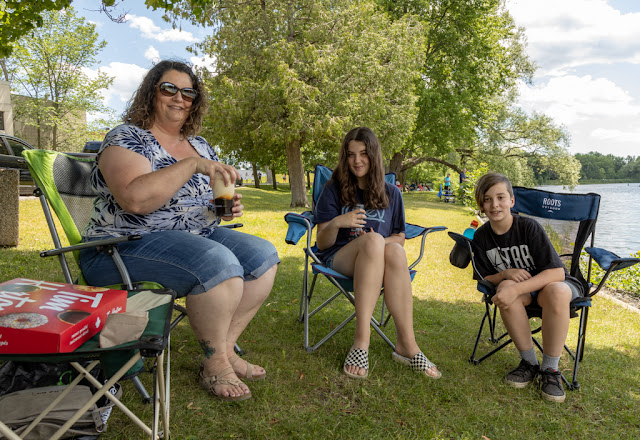 They arrived with coffee and donuts (above). I set up the camera on the tripod with a 10 second delay and had JJ press the shutter and scoot back into the frame (below). When Sue and I had tried this the other day, neither of us made it back into the frame. It was a longer distance then, but it was still nice to have young legs available on this day. 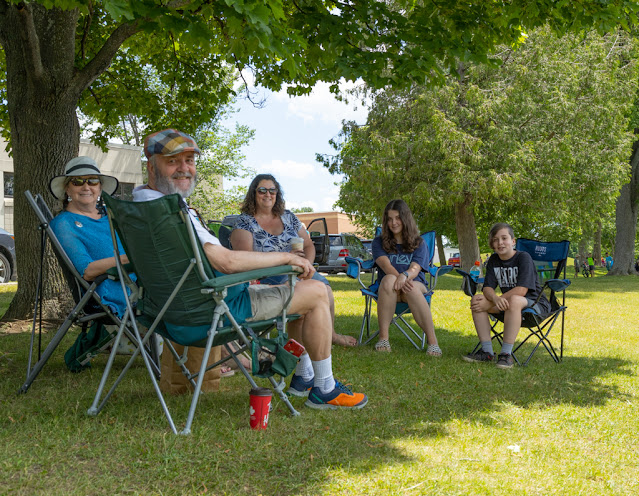 I then set up the camera to take photos with an app from the phone so that no more scooting was required. 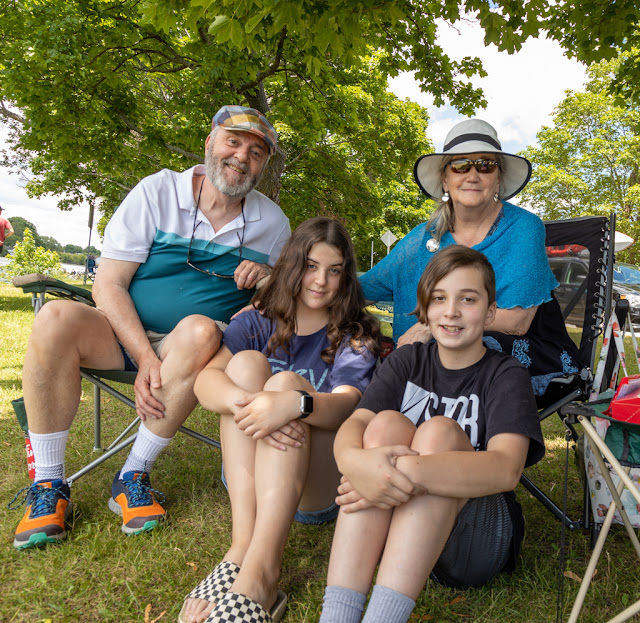 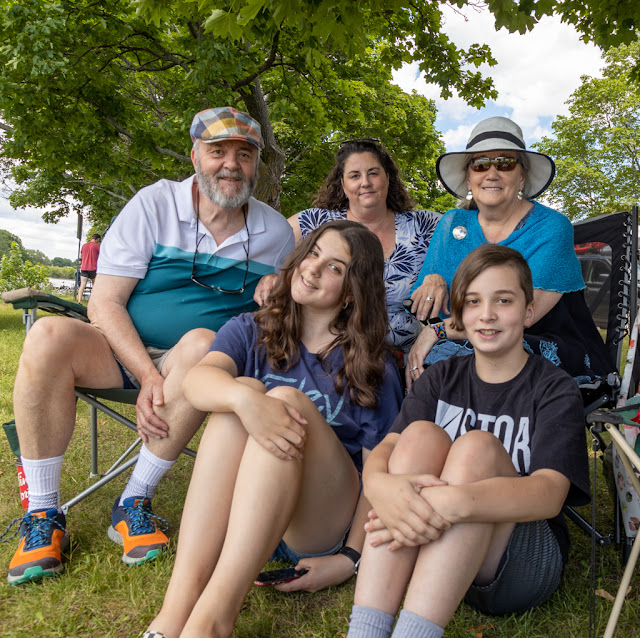 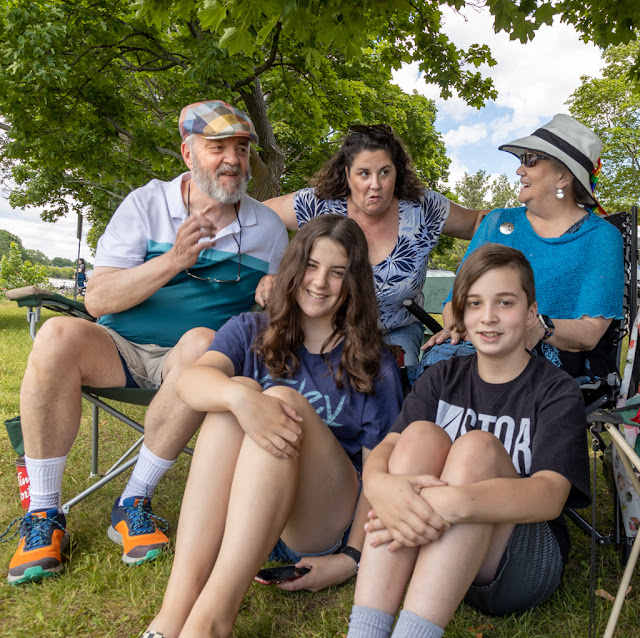 The orange theme continued when I opened the neatest gift. It is a long-sleeved hoodie made from lightweight material, which will be perfect to wear on summer mornings while offering me some protection from the biters. 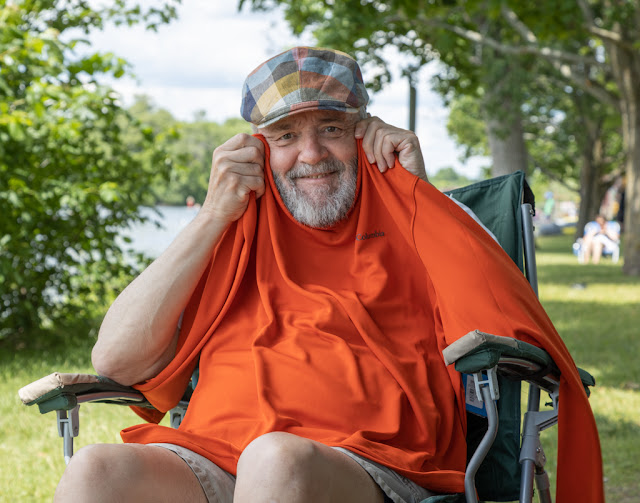 That photo ↑↑ is partly comedy because I have scads of similar photos of me receiving shirts for Fathers Days, birthdays and Christmases. It got to be a bit of a joke, more so when we would look back in later years and see the theme repeated over and over. I haven't been gifted so many shirts lately, but it was fun to pick up the old theme.
I almost forgot to mention the card, below. Mustn't do that. 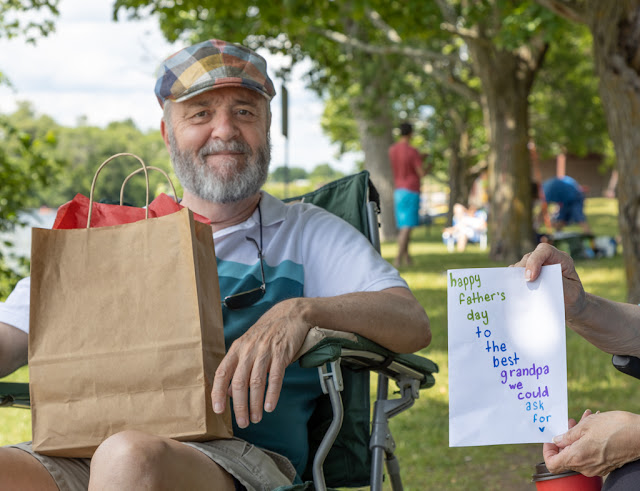 There was one other item: a drink holder thing to help keep my pop cool.
It was a grand hour or so. Come July, Sue and I will have been vaccinated for two weeks. The kids will be out of school for the summer. We should be able to see more of them without worrying, and rules will be looser too.
Posted by Anvilcloud at 7:00 am

Looks like you had a wonderful Father's Day being celebrated as you should. Your cap of many colours seems to be working with the wardrobe!! Cheers to 2nd shots of THE vaccine.

My eldest two kids phoned their step-dad. That was lovely for him. He never had a dad, or kids. Caitlin gave him a card. The grandies had trouble finding the energy for anything for their dad!

Crikey, I had another thought, but it escaped me.
Oh, yes. I loved the image, in my mind, of young legs scooting, while the photo is perfectly lovey and calm!

What a fun outing, with those fishermen right nearby, but I guess they would have moved on soon...and your grands are so sweet! Their gifts are the love and laughter they share, as well as the shirt hoodie and the drink holder. And then of course making memories and new photos! That's great that Sue willl be getting her second shot soon...hope that everyone can relax again soon.

Such a nice Fathers Day outing! And more orange!

The gifts are wonderful, but the photos and being able to get together are truly priceless! Such a lot of happiness radiating!

What a nice Father's Day!

Whaat happy images...with or without the hacker.

What a great day and celebration. I just love your new hat and Sue's picture reminded me to check out Tilley's offerings. Congratulations on having chosen such a fine family!

You had a great day and did some fun things.

Before long, you’ll have more time with your darlings. Hang in there you two.

What a perfect day!
Love the bright orange hoodie! :)

Your cup holder is great!

Nice family gathering on your special day and great to see all the smiling and unmasked faces as well.

Apparently July 5th is the next hurdle for our reopening.