Life can be frustrating at times. After coming home from my morning photoshoot, my photo program lost track of my catalog and is now taking many hours to re-import all of my previous photos although they are already there. I have done something wrong, but why can't professional grade software give you proper help screens when you run into problems. I probably didn't have to re-import, but I didn't know that.

So, I am just posting a bit of the descriptive palaver for now, and will hopefully add photos later. I have already posted a blog today, so I hope that this issue is all settled by tomorrow.

I hesitated about going out this morning because I didn't see a lot of hope for colour, but that spot by the farm lane did have colour beyond. Since I was hoping for the sun directly over the lane, I waited and got the shot. But I don't know yet whether it will turn out.

As I was waiting for the rising and still taking some photos in the interim, a car pulled in behind me. I could see that it wasn't a cop car, so I thought it must have been the farmer come to let me know that this was private property. I ignored him for a minute while I nonchalantly adjusted something or other in the camera. I didn't want to appear anxious, as if I didn't belong there.

When I did turn, I surprised to see Nick, a friend and photographer, who was also out and about. He was already on his way home at about 5:10 or so but decided to stop and pay me a visit when he saw me. He took some photos of me and my camera set up to take photos of the lane and the sun. I don't know when I will get copies, but I will likely post them if and when I do.

I will tick one more box before the photos arrive and will respond to TFG's query about why I would photograph at sunrise rather than sunset.

For one thing, neither sunrises nor sunsets are very available here. What I mean is that the alignment is off as roads run the wrong way on an angle. Even our river isn't aligned all that well, and I have already photographed it more than once anyway. I will again, of course. So when I passed this field one day with trees in the distance, I thought that it might provide a view of sunrise. It does. The geography is hardly spectacular, but the photos work well enough regardless. I have kept returning because every sky is different, and I can shoot from several different points as well.

Aside from that, however, I am enjoying the morning solitude with the birds raising their song. There are few people around to disturb my introverted self, especially in summer when the sun rises so early. I also find it satisfying to go out first thing and attempt to be artistic and creative. It is an effort to get going though, and sometimes I can't induce myself to make it. It was touch and go this morning.

Now, I will wait for Lightroom to do its interminably long thing, but if all goes well you won't have to wait because they'll be coming up now. 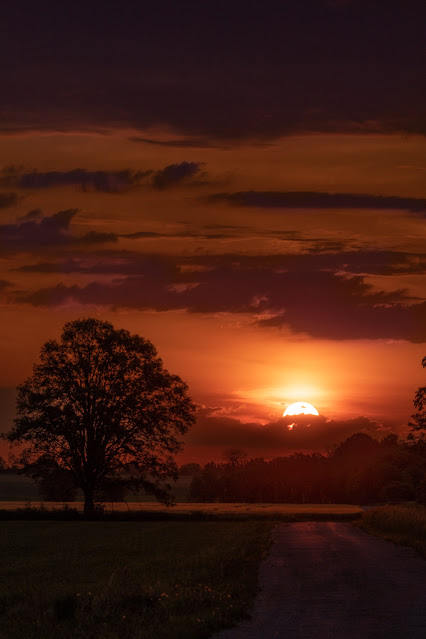 There it is, 7 hours of the computer and Lightroom and me trying to figure out the meaning of life. It is both a success and a failure.

Success:  I did catch the sun rising right over the lane, which is what I wanted.
Failure: Although I took many photos at different exposures, I couldn't get the sun to not blowout. I did manage in a sense, but the rest of the photo was pretty well black (included below). I tried to merge it (just the sun part) with another photo, but I couldn't get them to blend.
Composite: This is a composite of two photos: one exposed more for the sky and one for the land.
A Faithful Rendition: Although the photo may looked photoshopped, it isn't. It is close to what came out of the camera. I did lift the shadows a bit as well as dim the highlight, but not much.
Colour:  The colour is pretty accurate in terms of what came out of the camera, but I can't say how accurate it was to what my eyes saw. I was talking a lot to Nick at the time, so I wasn't concentrating as well as I might have. There's not much that I could have done differently regardless,

Just FYI. Here is how the photo that I exposed for the sun came out. My thought had been to merge it with a photo like the one above, but I just couldn't blend it in very well and gave up. 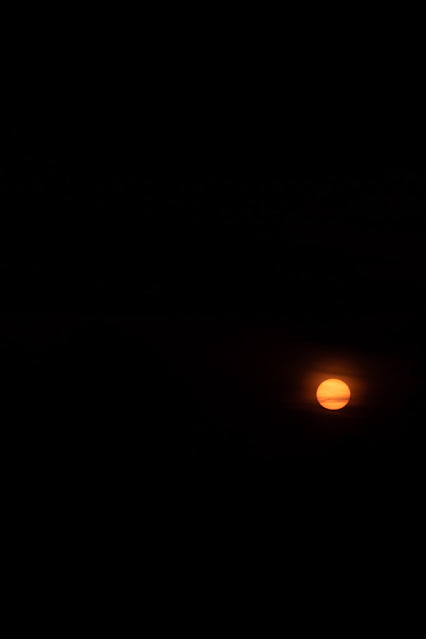 All in all, I am glad to have made the effort, and despite calling the result a failure in a sense, there remains something about the composite that I like.

Really well done. You have such patience!

A day in the life of a photographer's mind!

That must be why there are usually shots before ole sol actually rises...this is amazing to me!

Your skills at photoshop amaze me, even if you get frustrated not getting exactly what you envision.

For all they do for us computers can be a headache at times.

Did you go out this morning to get the eclipse?

Did you get out to catch the eclipse this morning?

Worth the effort. gorgeous shot. And, yeah, computers with digestion problems are not for the faint of heart.

The photo of the sun coming up behind the clouds is really lovely. I was up early this morning to try and see the solar eclipse but was pretty unsuccessful with my pinhole camera!

I love how your photos turned out. To a photographer, there might be disappointment, but to the viewer, they are lovely.

Yes, not a failure.

I tend to rely on river overviews for sunsets, and seem to prefer sunrises in the Glebe.

The peace and solitude of early morning would appeal to me as well, AC, but the problem is getting up and driving to find a good spot. Your efforts and patience have paid off well.

It is scary to contemplate the number of hours we spend on a computer fiddling with things!

Well, if you enjoy sunrises, more power to you. You do great some great photos.

I hope you jotted down notes; it's worth doing all over again.

You're an amazing artist. Great photo.