It had been 8 months since we last breakfasted at the restaurant with the patio by our beautiful river. Patio dining re-opened just last weekend, and with Father's Day coming up, we seized the opportunity. We often celebrate events like this with breakfast a day or two prior.

Although it was a beautiful day and not too hot, we found a shady spot. 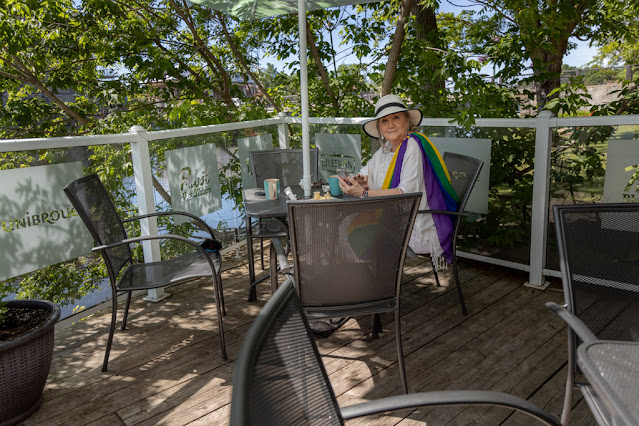 Sitting opposite Sue, I was looking at the leaves and branches that are behind her in the photo, but I didn't mind at all because it was good to be out, and the weather was quite wonderful. Sue had this view, or at least some of it, from her seat. 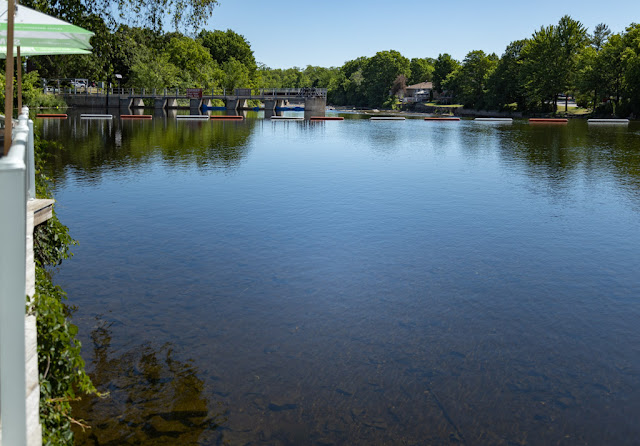 And I had a pretty good view of my Waterfront Scramble dish with three scrambled egg plus bacon, sausage and more. You may also notice that my beard is much more kempt than when last you saw it. I tried it longer but it wasn't me. 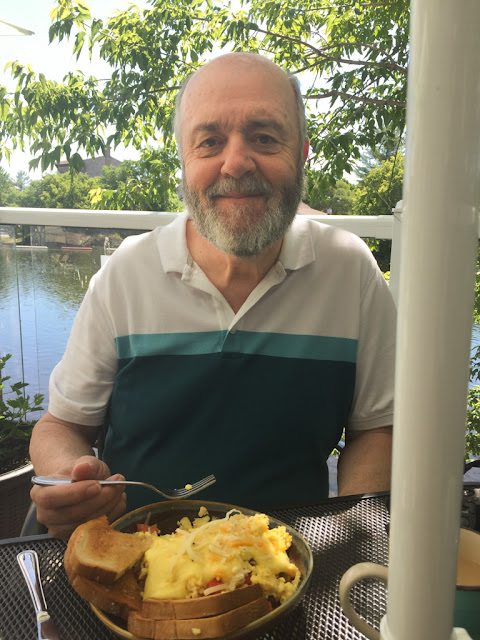 Thing Two
We had planned to attend the raising of the Pride flag, which had been delayed by other events. Only the night before did we realize that we weren't invited because gatherings must still be kept to no more than 10 people.
However, serendipity intervened and we could glimpse the raising of the flag from our spot on the patio. Sue is taking some shots, below, and two photos of the raising follow. 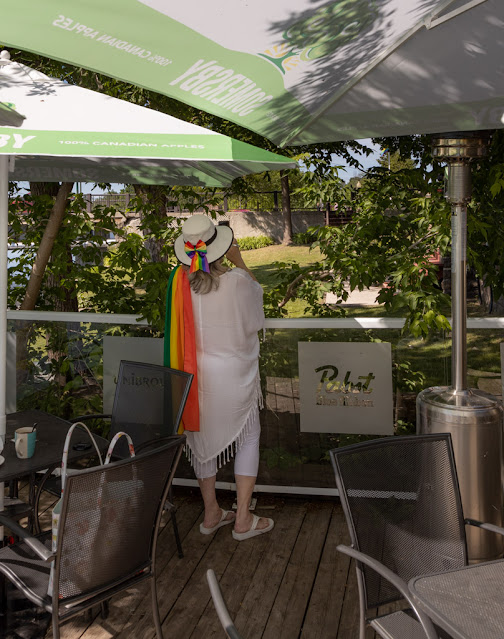 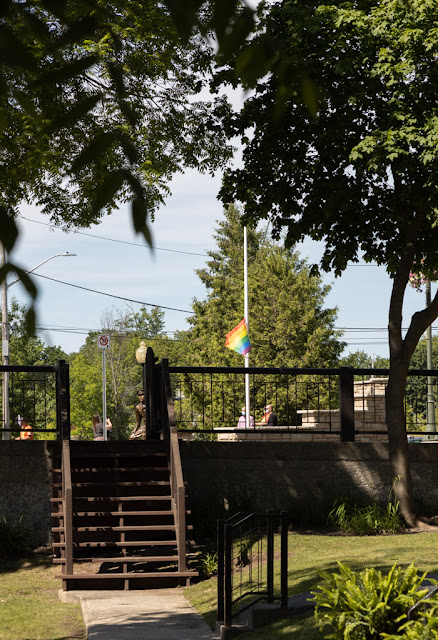 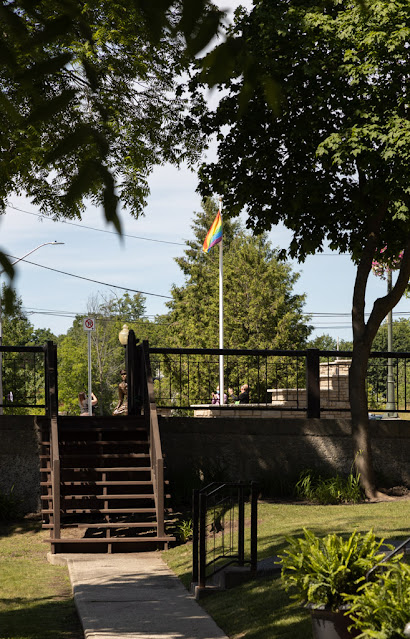 Thing Three
It was my day for the second Jab. You can just see the needle; it was withdrawing already. I tried to get a photo of the actual jab, and I did, but her hand was in the way. 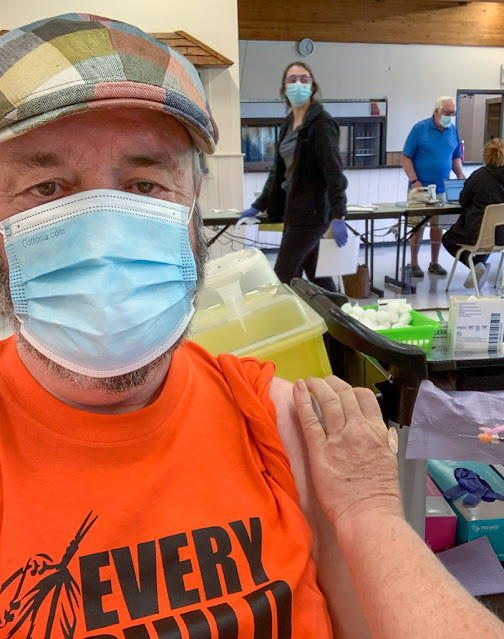 As I was sitting there for the mandatory 15 minutes post jab period. I felt a bit emotional to have reached this milestone. The science that went into this with such unprecedented speed is phenomenal, and the leaders of my country and province responded admirably. This is a time for thanksgiving, not for casting political stones as too many are wont to do.
I was jabbed on the third consecutive day of Ontario having fewer than 400 cases. This is quite a turnaround, for less than two months ago, in the peak of phase 3, we were getting more than 4000 new cases per day.
Thanks to lockdown plus an impressive vaccine rollout, life is looking up. Seventy-five percent of Ontario adults have now had one jab and 20% have had both. I expect this number to increase impressively over the next month or two.
I don't know how the future will go with the variants, particularly the Delta, but at the present moment, there is relief and hope.
Posted by Anvilcloud at 6:36 am

Congrats on your now fully vaccinated status and yes fhere is the hope that things are slowly improving. Hope you have a wonderful weekend with perhaps family visits included.

Yeah to the second jab. Your breakfast spot looks quite nice & I can imagine this spot later in the day with wine ...

I long ago discovered a long beard wasn't for me either. It becomes a lot of work, more so than when I shaved daily and had no beard. The short beard is the best compromise of daily face maintenance.

Congrats on the second shot although I'm a bit shocked that it is only now coming when in my area, everyone (who wants one anyway) from 12 up has been vaccinated and things are pretty much back to normal. I think our county went two weeks without a case, had 2 cases last week and this week none again so far.

What good news...you're fully vaccinated, the pride flag is waving in the breeze, and oh I envy you that breakfast! Enjoy your good health! Loved Sue's costume!

Serious Breakfast-on-the-Patio envy here. My favourite coffee spot has its outdoor tables in a parking lot. No view. Good coffee. I guess half is a lot better than nothing.
My daughters and ED's partner now all have two shots. Yeah Ontario. You are 100% correct. And the 18 yr old has one and the second booked. Alas that her graduation is going to be limited to parents only and a five minute photo op. However, she is graduating and has done well in spite of on-line to cohort to confusion learning this year.
I join your celebration. No flagpole, sadly.

I too love Sue's outfit, and the breakfast and view. Happy Pride! And congratulations on getting the second jab. In two weeks you'll have full protection.

I like your trimmed-up beard better than longer ones. I adore Sue's rainbow scarf. And it seems to me that if we don't trust the media and the politicians to give us the truth about covid 19 and vaccinations, we should at least have the brains to believe what frontline doctors and nurses are telling us they are dealing with. Scott and I got our second jabs yesterday but will continue to be as careful as we can. Those variants are no laughing matter. -Kate

Congratulations. In two weeks, you can hug grandkids. :)

Yay for the second jab and a patio meal. And the Pride flag of course.

I am way too uncivilized to be out for breakfast!
I love this spot.
Your Sue is a fashionista! I adore her style. Your trim looks pretty good, too.
Good point on the jabs. The technology and science is amazing.

My first jab is a few days away.

Those are three very good things. I got my second jab in early April. I'm afraid I'll need another before others get around to having a first or second dose.

Looks like it was a wonderful day all around. I agree on the beard, I trim mine once a week. Have a good weekend.
Mike

Those are three nice steps forward!

Science came to our aid, that's for sure.

I think, no I know, that what you ate for breakfast would see me through the whole day! I had my first lunch on a patio earlier this week, with a young friend of mine. We used to do it monthly, but COVID restrictions put an end to that. My second shot is booked for 29 June.

It is great to have fully vaccinated! congratulations! I am still waiting for my second dose.

That's a beautiful view, and your beard is looking great! So much good news here about the vaccinations and the percentages. Finally, we can relax a little.