On Wednesday, Sue and I took a little trip up to Arnprior for those fries that we like so much. The fries are good, but it is an excuse for a little outing as much as anything.
I will say more about the excursion as the post goes on, but right now I will tell you that we always take the chips to a nearby park overlooking the Ottawa River with the province of Quebec on the other side. 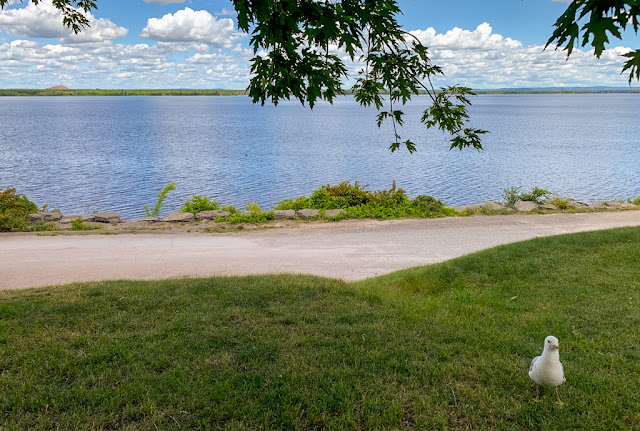 One thing that I wanted to discover was when and where the sun would rise, just in case I should one day get up early enough to drive that far for a sunrise. As we sat there munching our chips, I used the Sun Surveyor app. It uses GPS to hone in on one's position. Then, all I have to do is hold the phone up and Sun Surveyor will show me the sun's position at various times.

You can see in the screenshot that it would theoretically rise at 5:17, but in this location with this geography it would first be seen sometime after 6. It would then appear in the gap between the branches around 6:45. It is not that I want to take that particular photo, but it is information to be consumed and filed away.
Now, I will backpedal a bit and tell you about the trip.
On a previous occasion, which I wrote about in Eighteen Dollar Fries, we had had to abort the trip due to a loud, shrieking whistle. I had one loose car part adjusted after that, and we hadn't heard the noise since then. Mind you, we have travelled neither far nor at speed in the interim.
We were cruising along when I noted to Sue that this is about where we had heard the nose last time. Sure enough, at that precise instant, or so it seemed, the whistle started again. This time we found the record app on the phone in case we needed to describe it to a mechanic. But after a few moments it stopped and didn't start again.
How odd. The wind and angles of that spot must resonate with something in my car, but for the life of me I know not what.
Now for a few obligatory photos, starting with the selfie du jour. 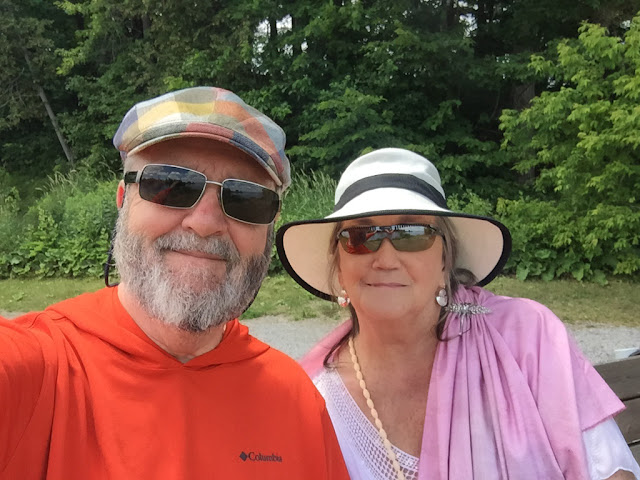 The chips weren't quite up to their usual standard, but they were good enough, and the setting, overlooking the river, was fab. While a medium box will do us, I did get the large this time. However, they were nothing like the gargantuan eighteen dollar larges of the previous excursion. 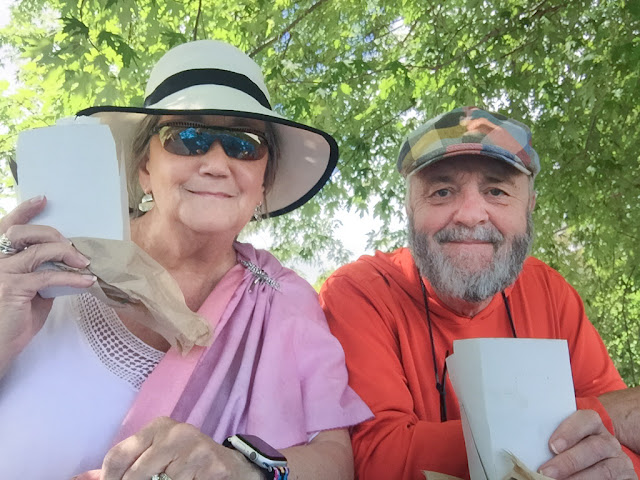 We walked a bit and then rested on a bench close to the river for a few minutes. I was rockin my orange that day with the Fathers Day hat and shirt plus those shoes. I love the material in the shirt. It feels so goon on my bod, and the long sleeves and hoodie can come in handy when needed, as in a warm, bug-infested morning 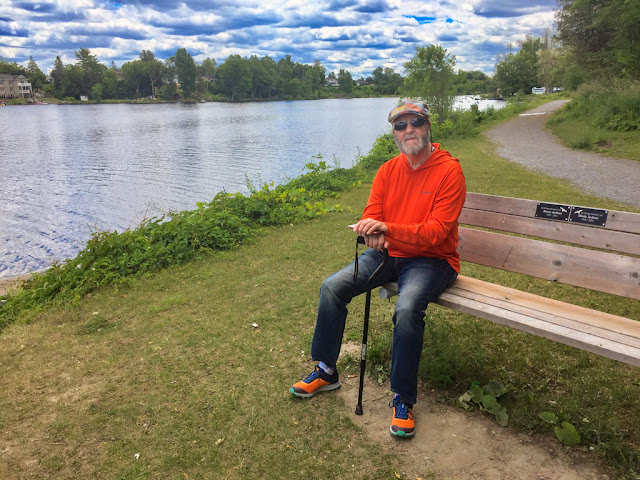 On the way home, we stopped for me to pull out Sun Surveyor again. 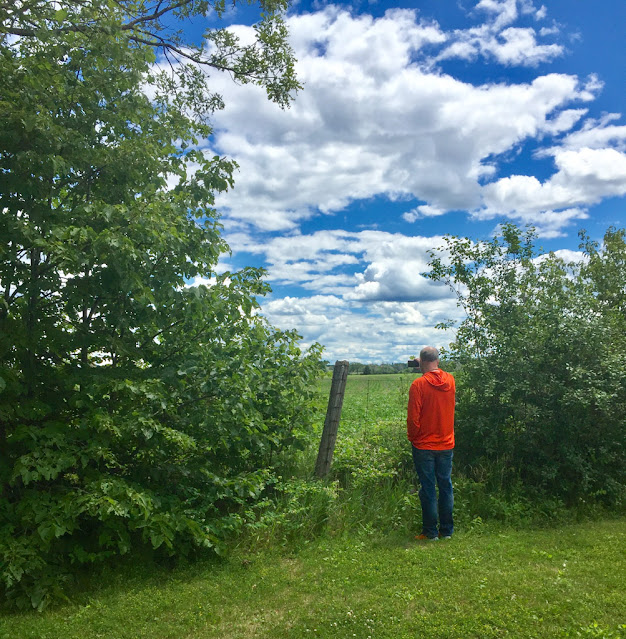 I was looking for a spot from which to photograph the Strawberry Moon which was to occur on the following night, but this location was not all that I had hoped. Later, I did find another spot, but unfortunately, atmospheric conditions were not good that night, and I didn't get to shoot the Strawberry moon, at least not this year.
Posted by Anvilcloud at 6:37 am

What a lovely excursion and the fries are always a great treat. We opt for ice cream more than fries but dairy bars are a thing here on the island. You can get fries at some of them though.

That sun spotter app sounds terrific. And I love that last photo.

I really like your hat and Sue's, too. Awesome! And cool shoes you wear.

Now that is a great app for you!
You two take great selfies!
I've been there, it's a nice town to visit.

Good trip but it wasn't all you had hoped for. Each trip you learn a little more.

Beautiful river views. It's been too long since I've gone to Arnprior.

You have perfected the art of selfies as we have as well. Looks like you choose a good location to enjoy the chips. Odd about the car whistling happening in the same spot.

It is weird the car sound come at the same spot.

It's all about the outings these days! (and food in the bargain is a plus) Great photo of Sue and you!