Out Again After a Hiatus

I had never intended to abandon the spot from where I have recently photographed a few dawns, but life and weather got in the way. We had a few nights with frost advisories which did not leave me inclined to venture forth in the frigid morn. And every now and then, believe it or not, I sleep-in past sunrise, or at least too late to get out and photograph it.
On Thursday night, I was able to get to bed at a decent hour – 10:30 – so I figured that 6 hours would take me to 4:30. That is enough time for me to get out because the sun doesn't rise until almost 5:20, and 6 hours is all of the sleep that I can count on. Really though, I can't even count on that much sleep. It is more accurate to say that it usually what I am hoping to get.
As it turned out, with Lacey's help, I was stirring before 3:30. Noticing that the window was completely damp, I figured that it had been raining, so I might as well roll over and try to get more sleep.
That didn't happen. I soon noticed Sue looking at her phone. Apparently the amber alert for a missing child had awoken her. Deaf AC hadn't heard it, but he did hear the equally noisy all-clear sometime later. I gave up, and when I checked the front windows, they were dry, as was the street. It hadn't rained after all, so I got ready and made coffee to go, but then forgot to take it.
I was surprised to see that it was foggy out. It wasn't all that thick, but it was enough to obscure the trees in yonder field when I got to my spot. I backtracked to another location that I has passed where I had seen trees that were visible because they lay closer to the road.
I parked on the laneway on the edge of a farm property. I am sure that I wouldn't have done this if there were a homestead on the property, but there wasn't, at least not in my field of vision.
I know the background palaver is getting long and tedious, but I do want to say a little more.
The last time that I was out with the camera here, I had set the camera on a white (light) balance that wasn't giving me true colours on screen. When I looked at the screen, I wasn't seeing what my eyes were seeing, and I had to try to correct the colour in post from memory of what it had been like.
There is a way to set a custom balance, which I have employed only seldom. On this morning I used it to get the LCD screen as close as possibly to what I was seeing, which is what I want to do. While I will manipulate some types of photos to taste, I try to get my landscape photos close to the light as I really perceive it. If I can get it close to right in camera, I don't have to try to remember later because memory is unreliable.
I think that is why I like this photo so much. It isn't a spectacular landscape by any means, but it pretty well captures what I saw or what I think I saw. 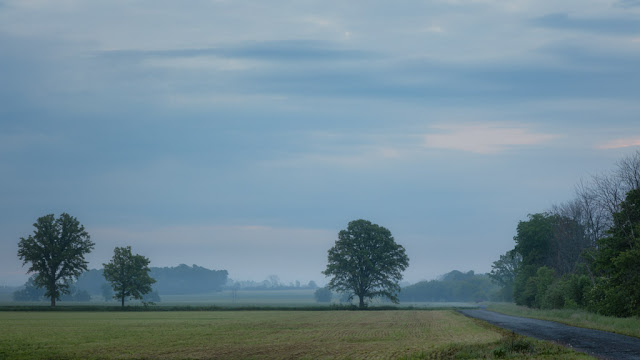 You can see the laneway on which I was trespassing and fog in the background. I cropped the photo to a 16:9 ratio, which fits a computer scree precisely, and it really looks good at the full screen with high resolution on a good monitor. I love the tranquility of the scene, but I suppose you had to have been there to truly appreciate it.
I have gone on and on, so I will post three more photos without comment except to say that conditions changed as I pointed the camera in different directions. 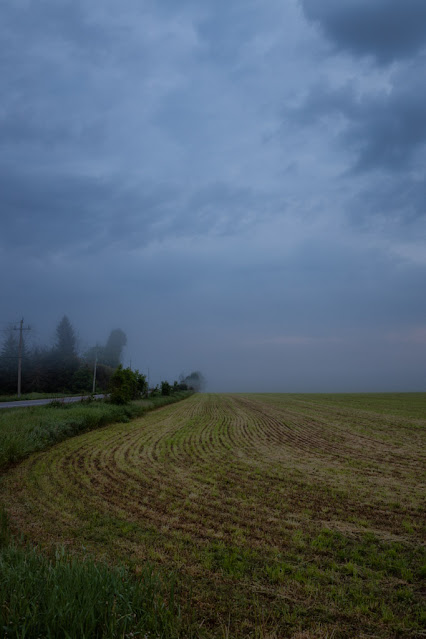 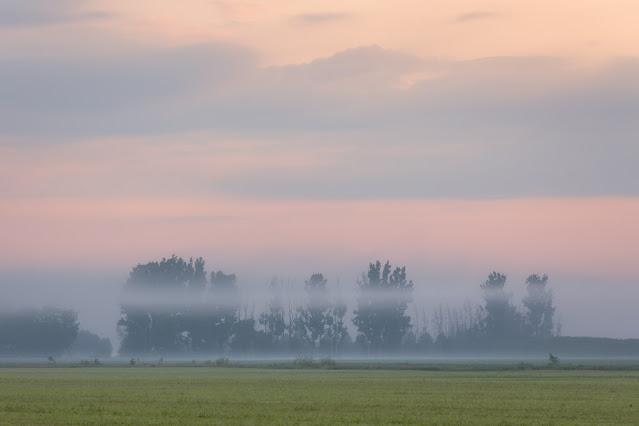 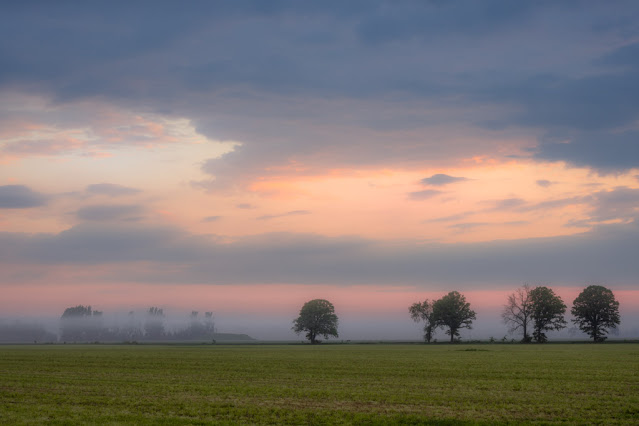 It was good to get out again after more than a week although there have been robin photos and a full moon in the interim.
Posted by Anvilcloud at 7:00 am

Beautiful photos! I like the last ones with the pink tinge to the sky. All your fabulous photos certainly are the beginnings of calendars as gifts for Christmas (col).

Second to last is my fav. Hope you enjoyed getting these, as I enjoyed seeing them!

All the photos are very beautiful..... but I am especially enamored with the furrowed field image..... the lines and the patterns are striking!!!!!

Quite lovely, thanks for the morning/coffee art. It's appreciated, even if I don't often comment.

As usual, you did a great job. I love foggy scenes. Good thing since I have only lived on Atlantic islands my whole life.

I love those early mornings when you can see the cows' heads over the top of low lying/drifting fog.

Not sure which would be my favourite: the first or the third one. They both have their own merits.

Your photos are really nice. I like the misty look.

I adore fog photos; I find them ethereal and calming.

Being brought up on a farm, people parking in field entrances or the sides of roads isn't a problem except generally in the spring when we are trying to bring large pieces of tillage equipment down narrow roads. And if for some reason, a farmer did stop you and start complaining, I think offering a complimentary picture might soften even the hardest of hearts.

I especially like the first and next to last ones the best, but they are all quite lovely. The light was just right.

I think all those scenes are tranquil, and probably very realistic. I struggle all the time with getting the camera to see what I see. I get tired of all those red filtered Facebook sunset photos. As for your ferns, Bracken is just one of 40+ species of ferns in Ontario.

Nice! It is hard to capture fog and mist. Beautiful! :)

Lovely pictures of the morning.

The strip of fog photo is also a winner for me. I slept through the Amber Alert AND the all clear and JG was annoyed with me as he felt obliged to get up and go and find the source of the row.
Interesting that you do not get colour values to match. I know that the colours are brighter in my monitor, but the values usually match. I am about to enlarge a copy of your photo one and admire it full screen. You do amazing work, even on very little sleep.
the YD now has TWO cats. Sigh.

Lovely views. I got that amber alert too.