I haven't been setting the alarm for my morning escapades because it doesn't matter much if I go out on most uneventful days. The eclipse, however, is a pretty unique event. With the show set to kick off ~5:16, I set the alarm for 4:30. My coffee and I were on site by ~5.

Previously, I encountered Nick on my early shoot, but on this morning, Bob was out there, ready to snap at a moments notice, as it were. He had set up on the other side of the road, a little farther down. 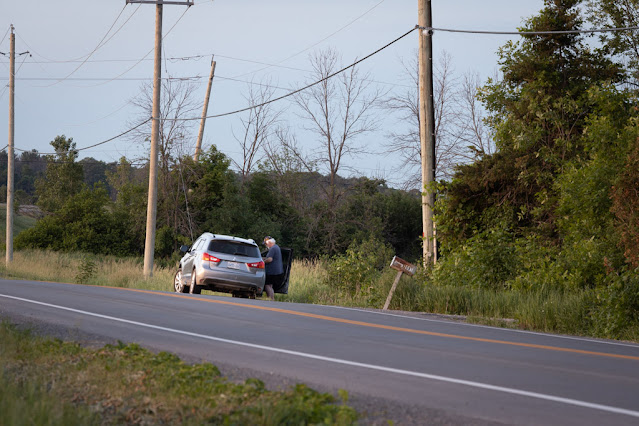 This ↓↓ is an early photo. I couldn't tell at this brightness, but the eclipse had already begun. It was even brighter and less apparent to the naked eye than in the photo. 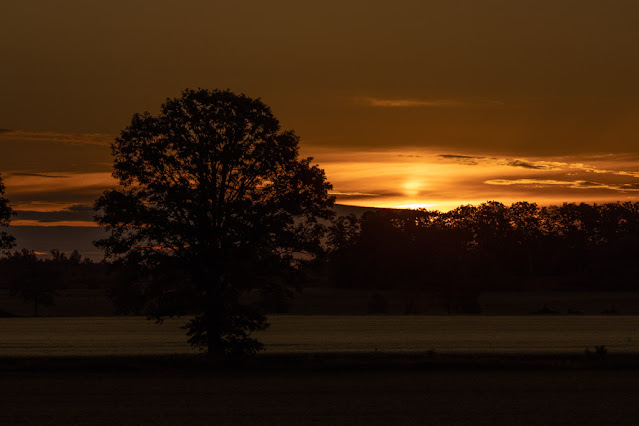 In point of fact, the sun was so bright, that I am not sure I could have discerned that there was an eclipse at all if I hadn't known. Perhaps I would have been able to see the eclipse when it was at its maximum as shown below, but one tries to avoid actually looking at it. I only looked through the camera screen during this shoot.
It was quite bright out, and I had to underexpose by a lot to capture the eclipse. I did this with the help of my 10-stop neutral density filter which resulted in this ↓↓ image. Most photo show the sun as white, but I wanted to retain colour by underexposing so hugely.
I did try to blend exposures to capture at least some of the sky and foreground trees, but this ↑↑ was all that I could mange to do. My hope is that the clouds with some trees at the bottom do give a bit of context. Otherwise, the straight eclipse image, before I blended, was pure black beyond the subject itself..
However it happened, I did capture the eclipse. While I have no particular use for bucket lists, this is a little moment for me to store in my memory banks. I don't suppose that I will see another or will be compos mentis if I do.

I remember seeing a partial eclipse when I was around ten years old and it has been my dream to see another one. A few years back I drove to see a total eclipse but ended up seeing only rain and clouds but still felt the eeriness of it getting dark shortly after noon. I've been reading about this one but we were too far away to try to drive to see it. So I wait... for the next time.

Good capture...and thanks for the "tweaking" to give a bit of scenery too. Definitely makes it more interesting.

You got it! I saw photos on the NASA instagram of the eclipse with US Capitol in foreground. In the paper there was one with Toroto skyline. Good job.

That really is amazing! I love the last shot especially. Really cool thing to accomplish.

I was out at 5:30 to see the eclipse too, I had a sheet of paper with a pinhole and a white board to focus the image but it didn't really work that well. I sort of saw it. And then I went back to bed.
Your image is super, like it a lot. Well snapped.

That is a great view of the eclipse!

That is so much fun! We've seen two total eclipses. One was in Hawaii and the other was in Illinois. I think there's another one coming up in 2024 which will be over Indiana, I think. We're thinking we'd like to go and experience it again just for fun.

I think you got a marvelous shot! Our shots were tiny, but we loved the experience of it.

Got this from Wikipedia:
This (April 8, 2024) eclipse will be the first total or annular solar eclipse to be visible from Canada since May 10, 1994, the first in Mexico since July 11, 1991,[4] and the first in the U.S. since August 21, 2017. It will be the only total solar eclipse in the 21st century where totality is visible in Mexico, the United States of America, and Canada.

I'm so excited for you and love the fact that you shared it with us. Definitely a bucket list morning.

I slept through it.

Nicely done! Thanks for sharing it! Good photo1

Good work! Thanks for sharing it!

Great capture, AC. Being an early bird has its advantages on a rare occasion.