NOTICE: Apparently this is the last day for anyone who subscribes by email. As of tomorrow Google will end this feature. Sad, if true.
June 30: it is a somewhat noteworthy day because the province is moving from phase 1 to phase 2 in its COVID recovery plan. The most noteworthy part is that we are doing well enough to move into the next phase a little earlier than planned.
Moving into phase 2 will not be a huge change for most, but it will allow for somewhat larger gatherings both outside and inside. More stores will be permitted limited opening, and there will be fewer restrictions on stores that have already been open.
It's progress done carefully. It might be more careful than necessary, but the Delta variant is of concern.
As I write this (on Monday) 70.3% of the population has had at least one jab, and 30.2% have had both. That's pretty good because it is referring tot he whole population when those under 12 aren't even eligible. Vaccinations have been occurring at the rate or ~200000/day. There is very little vaccine hesitancy and great efficiency of delivery as this tweet about a big Toronto clinic well reveals. 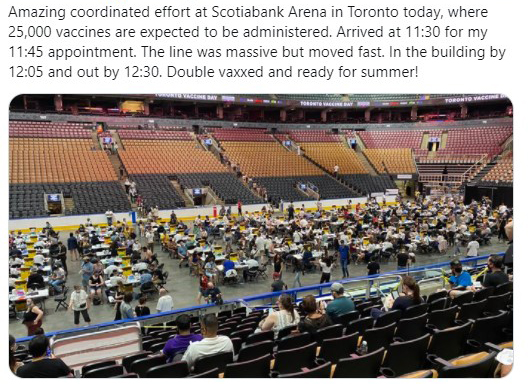 Numbers and trends have been good with fewer than 400 cases/day for a dozen days with some under 300 and even getting close to 200 on this Monday. Recall that there were almost 5000 new cases on the worst day just over 2 months ago. Where there's a will, eh?
If anyone requires a reminder about the efficacy of the vaccines, this post about LA County should just about be all that one needs to give their head a shake and roll up their sleeves for a jab. 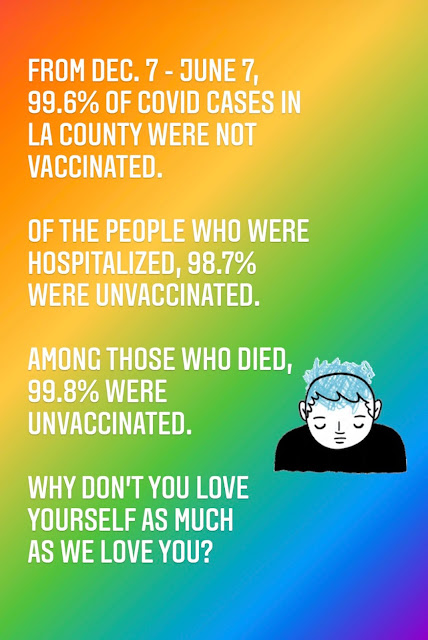 Good news on the vaccination numbers and on being able to move ahead, both for businesses and social get togethers. It still baffles me as to why some people would decline vaccinations and that graphic was most appropriate.

I think the refusal to be vaccinated is almost entirely about politics, not science. If you look at the states with the lowest vaccination percentage, they all voted for trump in the last election. It's a sad state of affairs, but predictable given the attitude about science and education among the largely rural states...Montana, Wyoming, and of course our southern states. I think if you ask the 'average' trump voter, they'd say they'd rather die of covid than be mistaken for a 'liberal' and get a jab.

My sister can't come yet again, this time due to the Delta variant. I asked her: the people that got that variant, were they vaccinated? The answer: almost none who contracted the Delta variant had been vaccinated. At least it did manage to make more people get vaccinated as a result.

I think Should Fish More has a very valid point: it is not so much science as politics with some people. And unfortunately that will never go away.

I hope the hesitant people will wise up when they and their neighbors begin to sicken. Canada has much less hesitancy.

It's absolutely to do with politics here in the States. Linked, of course, to less education. I could weep...

We are in the 80s here with first vaccinations now and the second doses are expected to be 50% by the middle of July. Very little hesitancy here too.

Good for you all. I wish the population here in the US had better sense. My entire, very large family except for two under 12's is vaccinated. I can't quite grasp how to enlighten the anti-vaxxer population, sadly they are eliminating themselves by dying.

It's quite impressive how Toronto lead the charge for this World record of vaccines given in one clinic on one day - bravo! I know now of 3 people personally who because of their research on F/B are not getting vaccinated. It's hard to understand their thinking ... I would like to copy that little sign from LA County.

That poster at the end tells it all. Of the unvaccinated who end up with Covid I've heard that some rue the day they didn't get a vaccine and others still doubt that what they have is Covid. How hard can it be to sign up and get vaccinated?

Other than children too young or stuck with stupid parents, or the immuno-compromised that maybe can't receive the vaccine, at this point, I frankly don't give a rat's behind about the idiots refusing to be vaccinated. If they die of it now, or suffer long term effects, they have no one to blame but themselves and their dear party leaders. Sorry/not, ya know?

I've had my first shot. Very efficiently handled, no issues.

This step means we can go to church this Sunday.

I used to try to convince people. Now I just wish them well and move on.

There are a few people who refuse to be vaccinated. I know one and have heard of the second from his wife, who is a nurse and not too happy with him about it. The refuser I know has this rationale: 'We do not know what it will do to our bodies long term.' I think he is just being stubborn, since this is pretty limp as an excuse. You wonder, really, what is at the back of mind of people who do this sort of thing - like believing Trump won the election. How did they escape learning logic? Or even common sense.
I am pretty proud of Canada today and will celebrate tomorrow.

Great news on the numbers; ours are no where near as good, although they ARE improving. The statistics are clear about who's getting sick and dying, but it doesn't seem to scare the unvaccinated. I'm worried about the Delta variant.

Hawaii still has a ways to go with our vaccination rate. That was a surprise to me. I thought we’d be a lot better. However, I believe we’re the only state keeping the mask mandate and COVID restrictions for now. This could be why Hawaii is burdened by an overflow of tourism. We now have more tourists coming than pre-covid.