Two mornings after the subdued and somewhat foggy photos that I posted yesterday, I was on the prowl early once again. Every day is different, and on this day, the clouds were quite thick and dark overhead and even blue, but here was a strip below where the early morning orange broke through. 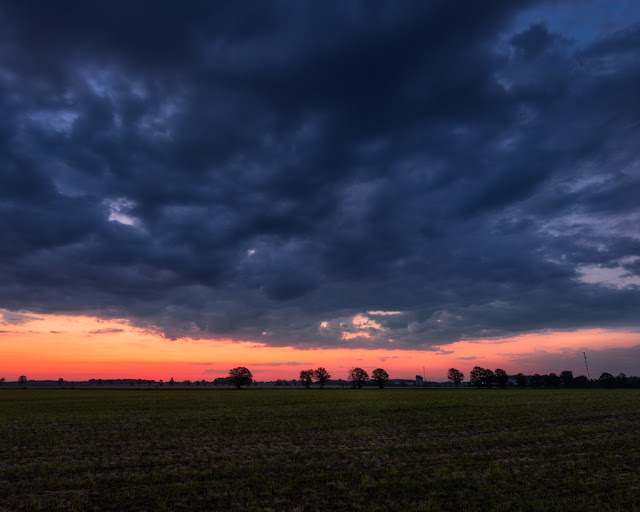 The patch from which I am shooting along the roadside isn't large. I used a tree on the edge of the opening to add a foreground element. Later in summer, when there is a crop in the field, perhaps I will be able to use that for foreground. A good foreground element does help to add depth to a two-dimensional image. 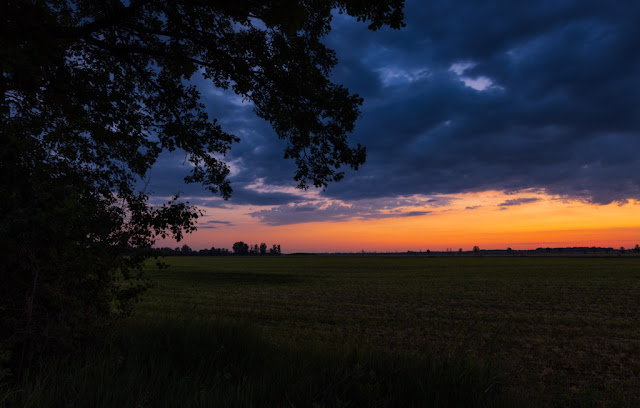 This↓ was an early photo, centering on a tree in the field and just catching a bit of the darker clouds above. 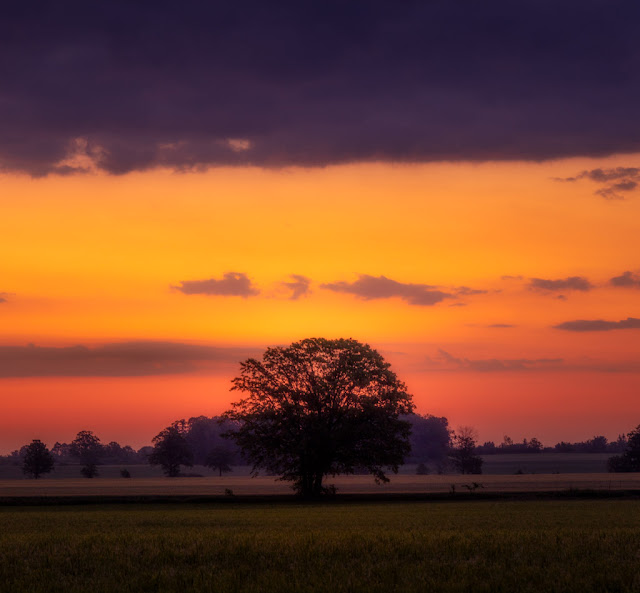 I waited for the sun to rise completely. To my eyes, there was colour in the low sun, but camera sensors are limited, so ole sol is blown out once again. I must try harder in future, probably with two exposures. We shall see. 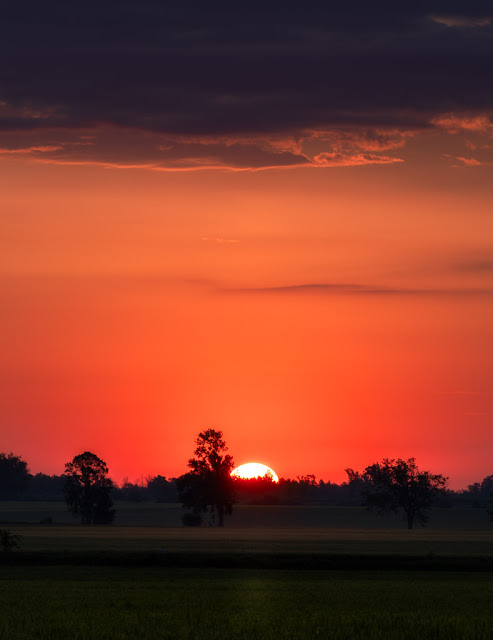 On that previous morning when the fog obscured to sun and the light was more even, it was easier to replicate the scene in camera.  With greater contrast in both light and colour. I found it more difficult to capture precisely what my eyes were seeing on this morning. One tries one's best, but I don't think I got the saturation quite right. I feel like I was either getting too much or not enough, and when push comes to shove, I opted for too much in this case rather than too little. It is difficult. I had the intention to depict how it was,, and I think I came quite close.
There is a local photographer who produces fabulous sunset photos, but I know that he has processed and saturated very heavily, and that spoils it a bit for me. While I admire his processing skills, it bothers me that the photos are, essentially, fake. I sure don't get my sunrises perfect, but I try to get them close to authentic because part of the joy for me is actually being out there and appreciating what I see in the moment. Then, when I see a reasonably accurate portrayal later on my computer screen, I am satisfied. The only point of developing a photo that wasn't what I actually saw and felt would be to seek more public approbation.
As I have written previously, these opinions represent how I feel about landscape photography when I have the time to set up and to do it right. This is not necessarily how I feel about other types of photos such as buildings or other objects. I am quite fine with adding a glow to a robin in the bath, for example, or accentuating the textures in a building, and so on and so forth.
Posted by Anvilcloud at 5:51 am

The 2nd photo is breathe taking. I'm with you on photos being overly edited take away the natural & yet I do yearn to learn more about Photo Shop.

I like them all today! On sunsets and sunrises that are intensely colored, or even flowers...I just shrug and say that's nice, but fake! Once the coloration becomes so intense from editing, it leaves me cold.

I understand your desire to make the landscape photos as authentic as possible. These photos are gorgeous! Great job!

On our community Facebook page, there is a photographer that is forever posting sunrise/sunset pictures that are so over saturated that they look like they are taken from another world. I've never understood the attraction.

I can usually choose my favorite among your photos ... but not today. They are ALL outstanding.

I love the last one! Really cool one!

I adore the one with the tree. I agree with you about the processing; I see so many fake photos of Rainier! Any of mine are quite real. She's breathtaking enough as she is.

In my books that third photo is outstanding, but I don't understand why you enjoy getting up at four in the morning! Why don't you photograph sunsets?

I agree. I like a real photo and not an altered or processed one. These are stunning. :)

The colors in all of them are marvelous. That first photograph is perfection.

I prefer not to mess with my original shots, so what I see in a sunrise or sunset is what I get.

There are advantages to being an early bird!