Sometimes, words don't mean what it seems like they should mean. Take this Synonym of the Day, for instance. 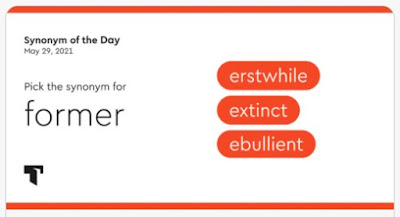 The only reason that I got the right answer when I saw it on FB was because I could eliminate the other two possibilities.
I know that I have come across erstwhile in my reading, but apparently, I never really knew what it meant. To me, it seemed like it should mean something like notably worthwhile.
Although it is synonym for former, it doesn't always substitute exactly; here is how thesaurus.com describes its usage.

The adjective former means, broadly, earlier in time (during a former stage in the proceedings) or, of two things in succession, earlier in order (Our former manufacturing process was too costly). Erstwhile isn’t a viable synonym in these cases, but it does overlap in meaning with former in phrases like the former president, a former dancer, former members, her former husband, or my former home, where former refers to someone or something in terms of what they at one time were, but no longer are.

If I understand correctly, one could use erstwhile quite often in place of former.
===========================
While I have your rapt attention (heh heh), permit me to make another slight grammar quibble after my recent lie/lay post. It is one I see on FB all of the time; I notice it in sports posts, like this one: "We don’t make playoffs without Allen well deserved"
It was a reply to a post about player Allen receiving an accolade, so that phrase, "well deserved," would be understood in the context. Therefore, I will reluctantly not harp in that part despite the lack of a period or other punctuation.
But I can't abide the increasing use of the present tense when either the future or past applies. We wouldn't have made the playoffs is what the writer meant. Is it really so difficult? I am just picking one one example, and to be fair, it was just a quick reply to a post, but I see this in main posts too and all too frequently, by qualified sports journalists.
=============================
I close with this although  I guess I am not being altogether silent. 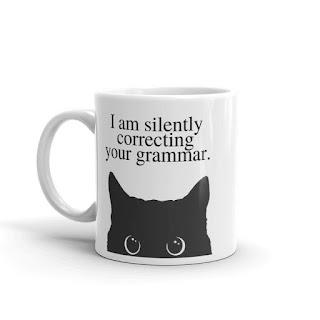 I think you speak Canadian. Nothing wrong with that...but I wouldn't ever call my former husband erstwhile...one is time related, and the other is a quality of his intentions, a value judgement...in my addled mind anyway.

I chuckled at your post from today & yesterday or is that from yesterday & today (lol). Always like to learn, in a gentle way, more about language & grammar. I have purchased that mug for a friend, as she is, in our circle of friends, the grammar police.

I am a grammar nerd. But I've begun to realize that certain forms and usages that I deem incorrect have become acceptable. One is DECIMATE--which meant to destroy one tenth but which now is generally used to mean wholesale destruction. Language always changes.

I agree with Vicki Lane. That one annoys me. Your forays into grammar always amuse and intrigue me. I would use 'erstwhile' as a synonym for 'former' in most cases, the exception being the use of 'former' as the first of two.

With you, I hate the present tense wrongly used. But your example is not a simple past but rather a conditional. 'Without x, the team would not have made the playoffs' is balanced by 'With x, the team did make the playoffs.' Your conditional has a present perfect building block ('have'), whereas the positive statement is the past tense of the verb 'to do', with an infinitive. Or so I parse it. You can get really tangled up in this stuff. English does have a subjunctive for conditionals in some cases. ('If you were to look this up, you might find that I am wrong.')
Sorry - I am co-opting your comments.

@MaryG. You are a died-in-the-wool grammarian who was well schooled in the finer points. As a geography teacher, who was co-opted to teach English for a few years, I lag far behind. Grammar wasn't taught as such when I was at it, but we did our best to cover the basics. BTW I really liked teaching English although I sometimes felt like a fraudster.

You Canadians are great when it comes to the English grammar. LOL.

In Dutch we have the word 'eerst', which now means first, but it somehow does relate to erstwhile. I listened to something a couple of days ago where somebody spoke in the language of the 1400's. I was able to follow it quite well, as it had a lot of Dutch words (that are still in use today in the Netherlands) in it. So, once upon a time Dutch/German/English was fairly similar. So, it would have crossed into the English we now know, leaving only a few traces of the old language. I think.

I love the word “erstwhile” when I read it..... but it has not really made it into my vernacular when I speak..... not sure why. For some reason it feels like it needs to be a visual word to me not an auditory one.

I have (happily) not yet noticed any misuse of present tense when it is referring to future or past...... it would drive me crazy if I noticed it!!!! And, unlike your kindness in regards to the offending statement..... the lack of punctuation, especially the needed comma before the accolade..... DOES drive me nuts!!!! I had to read it three or four times to try to figure out what the poster was trying to say.

For me, purposeful lack of grammar and punctuation (not slip-ups) feels kind of rude to me..... it makes me feel I have to do a helluva lot more work to try to understand what the writer is attempting to say.

But, then again..... I find it unpleasant to read essays from my students when they DO NOT double space after a period too... I sincerely think it makes the essay much harder to read.

That's not what I thought erstwhile meant either. Hmmm. I find myself increasingly annoyed by grammar mistakes and wince often while reading news articles, ads, the Internet and Facebook.

I need that mug.

That mug is priceless. I don't see how "erstwhile" can be used easily in place of "former." I agree with Barbara that it has a more nuanced meaning.

I love that mug.

Grammar can be interesting and I think it should still be taught so that people have some idea of the structure of English. Now I hope I haven't mad too may errors for you to pick apart.

It is nice to read about new words. That mug is cute though!

We need grammar police. It's such a shambles out there!
What I have noticed is that our grandies are doing well with grammar, they research everything they write in French, and it is usually perfect. It's kinda weird.