Argh! Those elusive words, mostly proper nouns! It happens too often in my dotage.

The word in this instance was Milanos, our pizzeria. We order about every 4-6 weeks. And I have such trouble remembering the name. I know that it begins with an M, but although all sorts of M-words pop into my lil noggin, none of them are Milanos. I know well enough that the word pop-ups aren't right but darned if I came come up with the right word. I mean, I usually do remember after awhile, but I gave up the struggle last week and resorted to googling pizzerias in town. As soon as I saw the list, I had it.

At least I still know how to google, eh?

That evening Sue leaned over, showed me this photo on her tablet and asked me if I knew who it was. 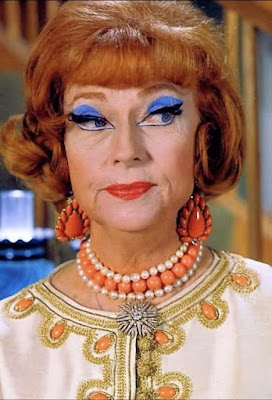 Of course, my dear. It is Endora, Samantha's mother in Bewitched, that 60s tv show. I knew it instantly, from 50 years ago!

How come, when I can't remember Milanos?

Later, we were watching British telly: DCI Banks to be precise.

I was able to explain to Sue that the character, Annie Cabot, was in all of the many volumes in the book series but would eventually be dropped from the tv series.

That's not bad recall, is it? I could picture her replacement who would play a different character, but when I tried to tell Sue who it was, the best I could come up with was something like, "the wife of that funny doctor on that tv show."

Sue looked at me in perplexity, but then I was able to say that the doctor was autistic or something like that, and Sue came up with Doc Martin.

Yes yes. That's the one, so I was then able to elaborate. "Well, the woman who replaces Annie Cabot on DCI Banks is played by the same actor as Doc Martin's wife." 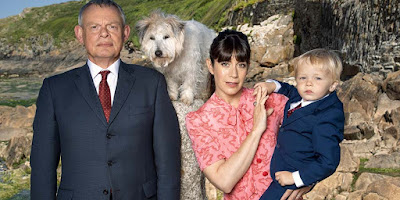 Sue could recall none of this, which sometimes happens when we re-watch an old series. Sue will swear up and down that we haven't seen it, but as we go along, I will remember bits and pieces and sometimes am able to tell her about something that will happen in advance. She then says that I must have watched it without her. Except I don't watch tv without her except for hockey. There was one other series, Longmire, that she couldn't stand, and neither could I after the first good season or two.
Back to Doc Martin and the actor, whose name or at least stage name is Caroline Catz. I have no trouble recalling the basic place, situation and various characters in both DCI Banks and Doc Martin, but the names so often stump me.
By the way, Endora was played by Agnes Moorehead. But you'll have to remember that for me because . . . names . . .  y'know?

I have that blanking too but can I recall any examples now? Nope.

We watched the whole Longmire series several years ago and yes the last episodes got very out of character from how Longmire was portrayed at the beginning.

Now we are watching Midsomer Murders and Poirot. The PBS channel that has the first on has split it into two episodes. We finally decided to wait so we can watch both episodes back to back so we remember what is happening. It was very confusing watching it a week apart.

Yesterday I asked one of my fellow gardeners his name for the nth time. It is "Dunlin" and I simply cannot remember it! I'm trying a few different techniques now like writing it down here. It's very frustrating not to be able to pull up a name that you know you know!

Blanking eh. The Mr and I are just having one of THOSE discussions about spring rolls. He's describing them in great detail (how awful they were) but my brain is telling me I've never made spring rolls.

I liked the old reasoning...that once we have so many memories in our brains, as well as all the abilities we have (not counting spelling or math) there needs to be something pushed aside in order to learn to do new things. Think about erasing the history on your various internet links...or how to save things. We who lived before the computer savvy kids (born knowing how to fix everything) have more in our memory banks than the youngsters. Thus useless names are tucked waaaay back where we just don't have memory links.

I am the same way. My memory is sometimes selective.

I knew right away too! I was a fan of Bewitched. I also liked Longmire but don't remember the names of the actors or the characters. I know faces much better than names.

I have a terrible time remember the names of volunteers at events! So embarassing! I also can never remember the name of Tom Cruise's first wife...that Australian lass now married to a singer...oh well.

I took a course by Dale Carnegie once that taught me how to remember just about any name and it really works. They key is to make a mental picture. So for an Italian pizza joint named Milanos, I would picture the city of Milan as one of those adobe villages up on white cliffs of Italy next to the ocean with O's painted on the cliff faces. Milan O's. I find if I paint that mental image into my brain and reflect on it for a few minutes, it comes out much much easier the next time I try to come up with the name and sticks with me.

I do know. Same brain freeze with increasing frequency.

At least you own op to it. I just smile and keep quiet, hoping they will think that I'm just not interested. It's better than admitting all those many memory losses !!

I remember Bewitched, but I don't remember any of the actor's names. I'm terrible at names. TERRIBLE! Actually, I'm having a terrible time with word retrieval. I have to go down the alphabet to help, but even that doesn't always do it for me. I loved Doc Martin. Hmmm... I wonder if they've ever renewed it.

My husband and I can often recall things between us too. I hope we both don’t “lose it” at the same time.

Agnes Moorhead was an amazing actress in all regards.

Sorry to inform you, but you're not alone. Same sort of memory problems here. And we've also been watching Banks, with the strange DI Morton who is not in the books. But we do remember her from Doc Morton.

I am no good with names or faces. Actually, it serves me well.

I would have identified that photo as Woman With Excessive Makeup.

The Golden years and forgetting names I use the same method think of the first letter and then when it from there hoping for the best. Yuck! Ray

Yah! Same happens to me. Remember some little fact from TV years ago but forget something immediate or relavant to my life--LOL! Or forget I've watched a movie--yes!

It's the short-term that's the first to go!
I like this actor.
names often stump us, too.