When I posted Robin in the Bath, I mentioned that we had two birdbaths.

Hoping for some photos of the nearer bath, I played the waiting game on three occasions. I wanted this bath, partly because it is closer and partly because I might get a reflection.

The waiting game was not fruitful. Out back where we face west, the afternoon sun is very hot, even on a cool day. The birds didn't come, and I had to beat a retreat after about only 10 minutes.

Thinking that the birds might drop by before bedtime, I went out for another try in the evening, but the birds were doing whatever birds do, elsewhere. One hummer did do a brief flyby. No, I didn't get a picture.

Then I figured that they would surely come by early in the morning, so I was on my chair waiting before 6AM. It was a very cold morning, and I sat in warm winter attire, including gloves. I gave that up after about a half hour.

I could never be a wildlife photographer, for I neither the patience nor stamina.

That afternoon, however, serendipity struck. I was near the patio doors but inside when a robin decided that it was bath time. I wasn't about to frighten it off by opening the door and attempting to go out onto the deck, so I shot through the screen.

As you might imagine, the photos straight out of the camera were not great, but shooting in RAW gave me enough latitude to poke them this way and prod them that way until something semi-respectable emerged on the computer screen. I did say, semi.

The robin first came to the near bath, but the photos from that visit didn't turn out so well. It bathed there and then went to the back bath to splash about some more. Finally, it returned to the near bath, and I managed to get a few photos.

I wanted to get a reflection, but it only worked when the water was still, before the splashing commenced, so the photo is very so-so with no action. I would remove the chair leg if I were to edit this photo more, but it is fine for a blog post. 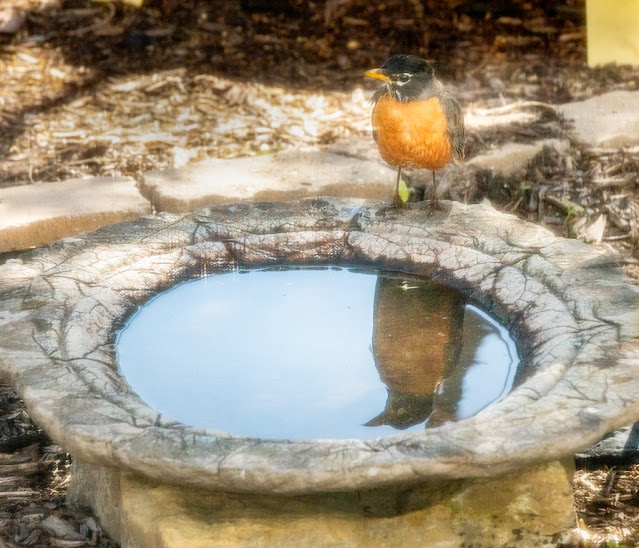 The bird got into its ablutions with great gusto and apparent joy, at least it was joyful to me, the observer. 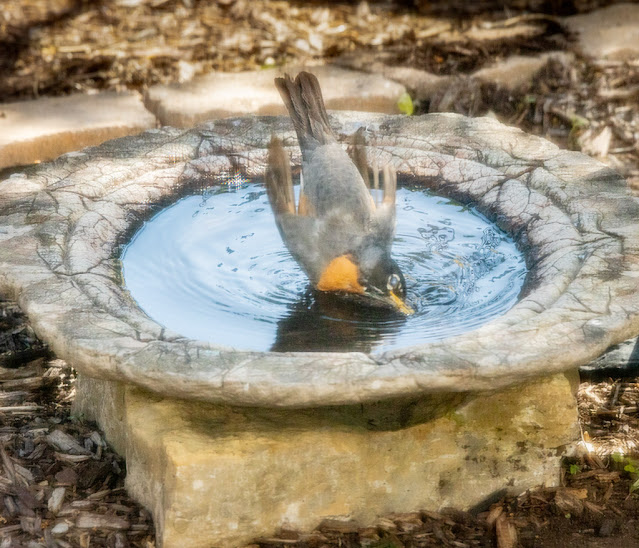 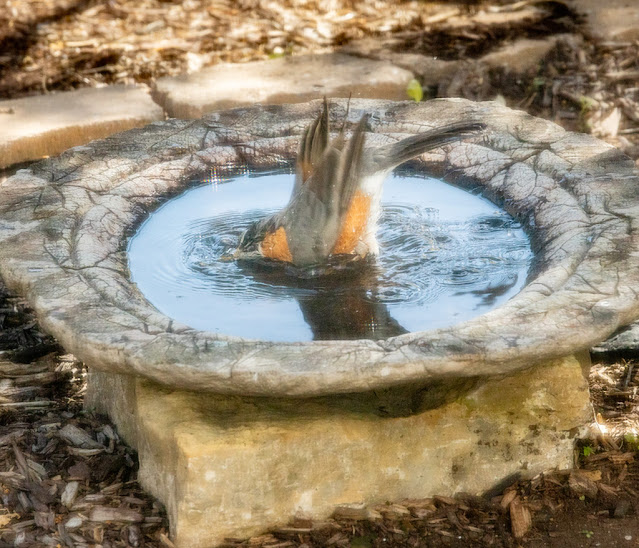 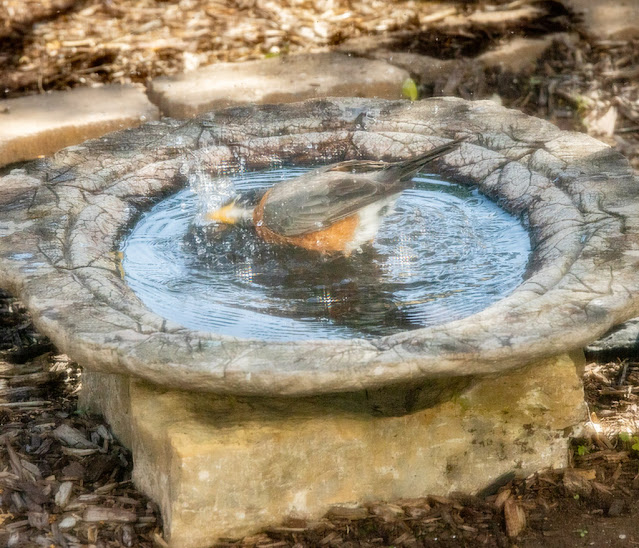 Shooting through the screen produced spectral highlights in some photos. They are very visible in this ↓ image. 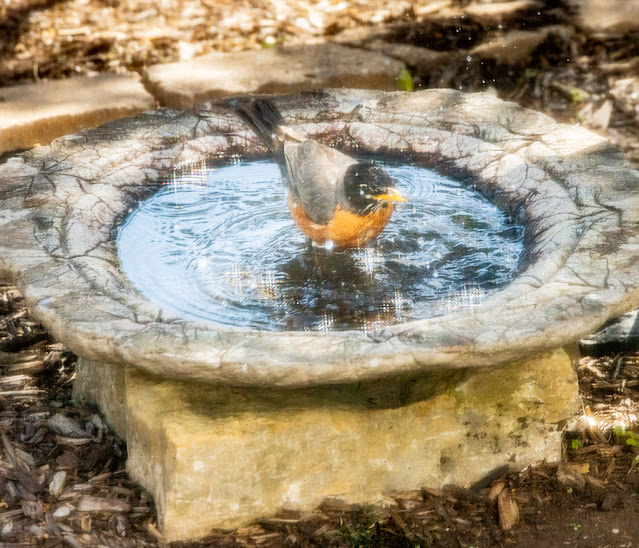 Those photos were all taken on the bird's second visit to the near bath. I also have a few from the visit to the far bath. Sue had switched the planter from the previous post, which adds a different look.
It is as if the bird were about to snatch up the spectral highlight, which fortuitously, is at the tip of the beak. The placement was not photoshopped. 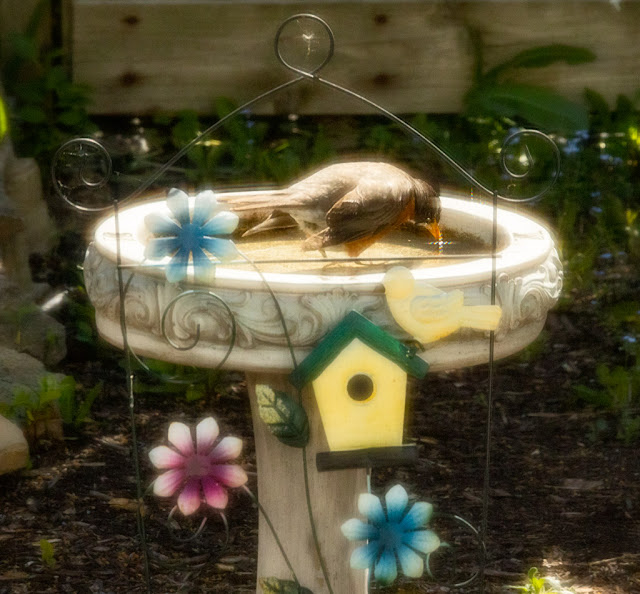 The next phot catches the shadow. 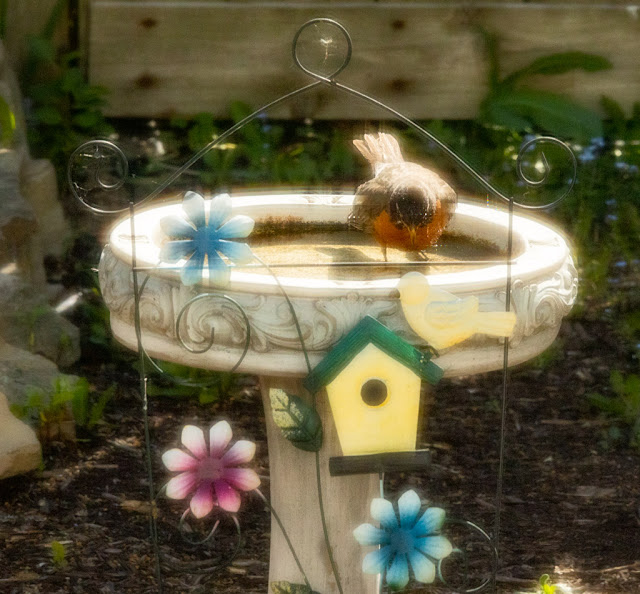 Finally, the highlight adorns the head like a crown of light. 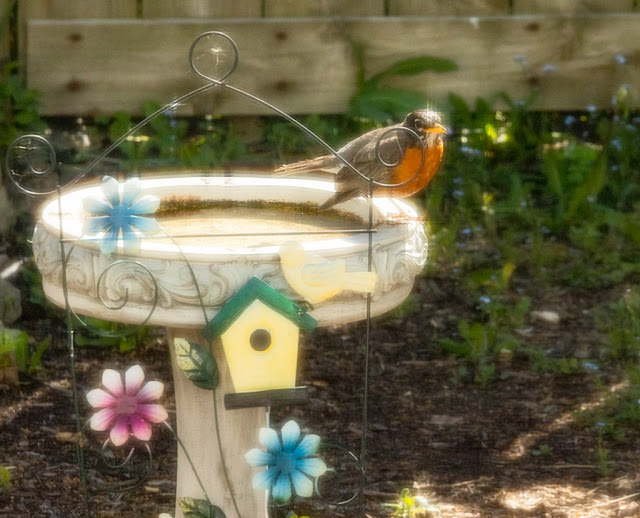 Through the screen or not, I like the series. Maybe someday, I will get another chance without the screen in the way, but I am satisfied for now.

Posted by Anvilcloud at 6:29 am

I like your birdbath bowl. A WOW photo, great reflection in the first.

For some reason I got to thinking about what us human would look like bathing in a lake with our arms held against our backs. Much like birds I guess and that make me laugh.

I loved all of them AC. So glad you shared it, screen and all.

We delight in the series also. :)

What a delight! I admire your perseverance.

These are very atmospheric. You did great!

I love how robins are such enthusiastic bathers! You captured it well. :)

I like all of these, too, and especially the first, with the reflection.

Shooting through screens is always challenging, but you managed to make your experience work well with those highlights on the robin which seemed judiciously placed, even if unexpected.

The delight of the bird is evident in every frame. Thank you!