First item on the agenda on Monday morning was to click into the school bus site. As we feared but rather expected, the buses were cancelled.

It was not the first snow, but it was the first Snow Day. Sue and I have called it a Snow Day when buses were cancelled and particularly when schools were also cancelled. However, and sadly for me back in the day, schools tend to remain officially open unless it is really bad, even though students don't bother to go when buses are cancelled. Not even the pedestrian kids go because they're not stupid. Teachers still have to show up though, which always drove me crazy, especially when I had to travel out to a country school in poor weather to sit in a school devoid of students.

But in these days of retirement, you would be forgiven for wondering how school buses might affect a pair of seniors. Well, a few years ago, it would have meant extra child-minding duties, but now, with the kids pretty self sufficient, it just means no exercise class for us. This isn't our call, but how the authorities ... um ... authorize it: No Buses, No Exercise Sessions.

I did take a few crappy snaps out our windows. While it briefly crossed my mind to go out, it wasn't a good snow, and it also may have been raining at the time, and I was still in my PJ's. The rain was likely the main reason for the bus cancellation, as it was freezing rain when the buses would have been rolling. Freezing rain on top of snow just isn't good. Come to think of it, freezing rain ain't actually the cat's pyjamas at any time.

That's right American spellcheck, I spelled pyjamas the Canadian/British way. Take that will ya.

This was not a pretty snow for, as the temperatures were warming, it was already turning to regular rain, and that just makes it yucky.

First out back, then looking out front. 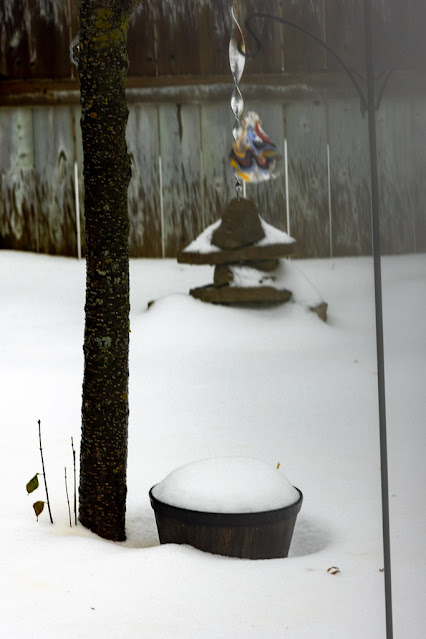 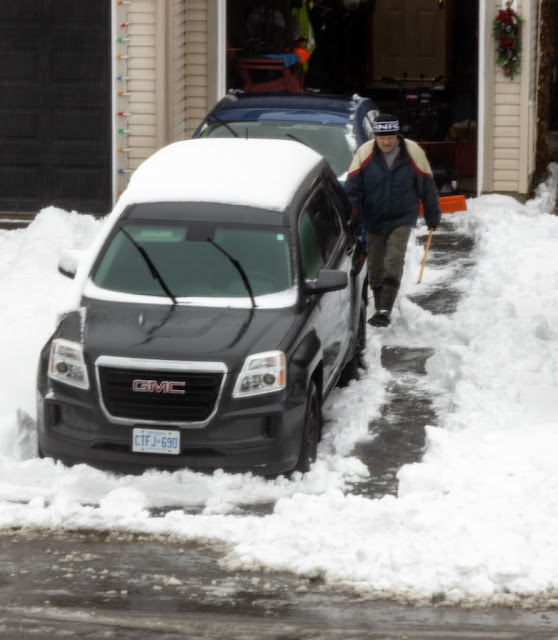 As I already wrote – Yucky! And I am going to make it the title too.

We’ve yet to have that weather this fall but it’s been miserable, that’s for sure. Take care!

It was all rain here south of you. Lots of high winds too. Snow had been in the forecast for Wednesday but now it's just flurries. Just about all the snow on the ground from after Thanksgiving has been melted by the rain.

I wonder how you say the word pyjamas - I want to say pie-jamas.

I know that you will be thrilled to know that down here in my little town of Vass, North Carolina, USA the temp for yesterday rose to 73 ... actually I miss the snow.

At least in my neck of the woods, if the buses aren't running, school is not open and the teachers stay home along with students.

@Barbara: I assure you that we say it the very same way as you. Well, in our own accent, of course. 😜

Yucky indeed! Our mountain passes are getting hammered and there have actually been a few flakes of lowland snow. Hoping for no more! On our snow days, teachers didn't have to come in although they encouraged us to when it was "safe."

Is there any other way to spell pyjamas?? I did not know there was an American way. Ummm.

Thankfully the school in our little village is walkable for all. Yes perfect description of yesterday's weather - Yucky!

Quick, snow. Snow is only really nice if you can hit the slopes. In urban areas, it is just a nuisance. I spotted some snow flakes out of my window today but it maybe was just an illusion. The Gulfstream keeps temperatures up here so not much snow in general, even though you and I are probably at similar latitudes.

Ah, that time of year. Even the big island of Hawaii is getting unusual snow levels...up on the volcano tops, of course.

Looks like it was heavy snow! Toronto didn't have that much snow yet.

Everybody is getting snow. The kids get time off, and we all realize why the New Yorkers all moved to Florida when they retired.

we have not seen even a flurry yet here in Nashua, NH, and hope it holds off until after we return from our Christmas family visits. When we lived in Virginia, even the forecast of snow would close schools the day before. We lived in a largely rural area and the buses did not do well in bad weather conditions on back roads. Your snow day did look yucky!

Wet sloppy snow when it's freezing is about as bad as it gets. I've enjoyed the pleasure of having to be at school all day without students.

Yep, that's sloppy stuff. That word is spelled "pjs." Okies spell it Pajamas. Love the Canadian way with the y. Looks classy, like when I'd wear my silky pretty "jammies" instead of flannel "night clothes." We need a photo of your pyjamas. Stay warm and safe. Linda in snowless Kansas

We had a dusting of snow the other day, but it disappeared soon, especially as the rain arrived. It didn't look like nice snow either: very wet and well, yucky!

Well, I'm spelling pajamas like a yank, so take THAT!

So far, at least, our snow has the good grace to melt off between storms. I don't envy you your yuck.