It was a late night with an overtime hockey game in which my team lost although the series is tied. The forecast was for rain in the morning, which would mean heavy cloud cover, so there would likely not be a sunrise. After some dithering, I set my alarm anyway.

And then, I had great trouble getting to sleep. I think I was still awake at 1 o'clock, which did not altogether increase my enthusiasm for an early shoot.

Regardless, my silly self rolled over at 3:57, three minutes before the alarm was set to rouse me, and I was able to turn it off before it might wake Sue as well.

I still wasn't sure about getting up. I checked the sky and saw that there were low clouds that would obscure the rising sun. But I also saw some spaces above the low cloud bank, which could result in a photo op.

Even though I wasn't certain about what I should do, once the idea was in my head, I wasn't about to get back to sleep anyway. I hauled the old bod out of bed, got dressed, made coffee, and headed out.

I drove down a laneway by which farmers could access their fields. It was marked as a road, so I wasn't trespassing.

So it was that I was able to catch some photos of the first rising of the sun after the solstice which occurred close to the previous midnight. I didn't see the sun exactly, but I did see its effects.

I mentioned previously that I would experiment with inserting myself into the frame more. I think this is an appropriate solstice greeting. Don't you agree? 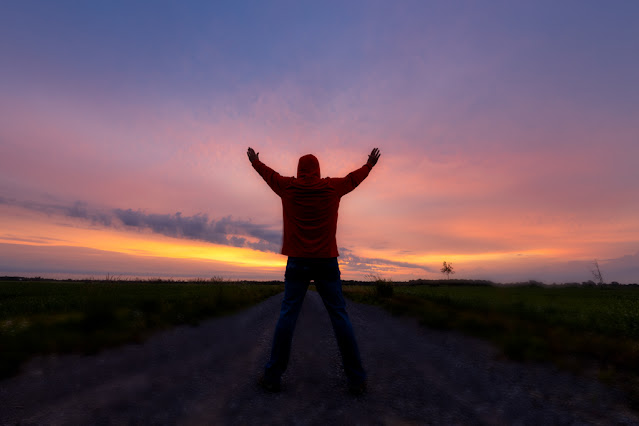 Off to the side, I spied an interesting cloud formation, so I shifted the camera. 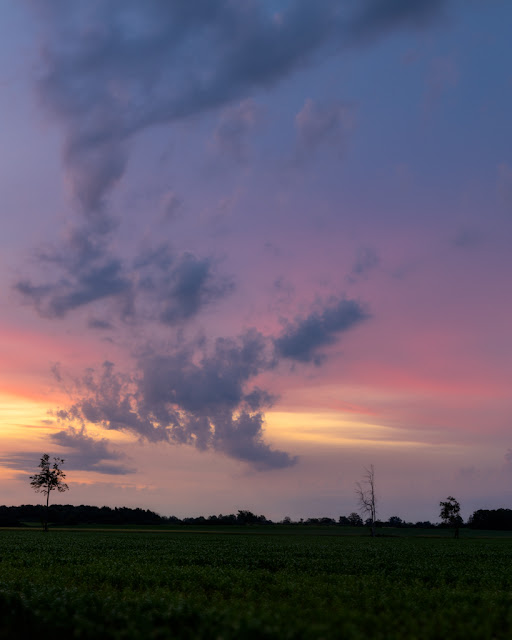 Note: all three original photos have a little more light and detail
on the ground part than what is visible at Blogger resolution.
It would also be nice to photograph the solstice sunset, but as I write this on Monday morning, it is overcast. If I do manage to get a photograph, I will post it below. If you see a blank space, you'll know that it didn't work out.

Posted by Anvilcloud at 6:17 am

All good photos, I'm so impressed with your early rising to capture the sunrise. I like the one of you greeting the Solstice sunrise.

Definitely too early for me. Do you get to have a nap in the afternoon when you get up so early? I hope so!
The sky is a wonderful subject, such vibrant colours.

I hope you got a nap later in the day!

I feel tired just thinking about your lack of sleep. Nice photos, I especially like you greeting the sun. :-)

Beautiful sunrise photos...I'd like to see more of the foreground actually lit a bit more. But they are all keepers!

As always, your early rising is impressive and the photos were definitely worth getting up for especially the one with yourself included.

That photo makes your 4 am rising worth it. Easy for me to say!
Skies are endlessly fascinating to me.

Clouds make for great photos. They add contrast and shapes to the sky. The one with you in it is a keeper--so artistic. Thumbs up!

That was fun. I'm often up at 5:30, just not feeling human enough to do anything!

Wonderful pictures! And I love your Solstice greeting!

Those who get up early are rewarded with good photo opportunities.

I really think the image of you posing in the image isTRULY the best of the many very fine images..... it evokes emotion more resonantly to me!!!!!

Thank you for that fine effort, all around.

Morning has broken...
Gorgeous sunrise, but how do you get by with so little sleep!

If you can’t be at Stonehenge, you did the next best thing. Love it.

Beautiful dawn shots. I meant to go out to a spot for first dawn of summer shots, but slept through it.