Where do I begin? You probably know about the discovery of the remains of 215 Tk’emlúps First Nations children, at a former residential school in Kamloops, British Columbia. It has been well-covered by both America and world news outlets.

Canadians are aghast. It is not that we didn't know about these residential schools whose job it was to expunge the savage out of the Native children. It is estimated that 150 000 children were snatched and shipped off to boarding schools where, under the threat of punishment, they were not permitted  to speak their native languages. Stories of brutal punishment abound.

I quote from an article from theconversation.com.

The Canadian state, in partnership with the churches, has long unilaterally assumed sovereignty over Indigenous mortality and bereavement.

Nowhere is this more apparent than the atrocity at Tk’emlúps which has sharpened this for many Indigenous nations, as we see how the Catholic church not only denied these children the capacity to shape the means of and choose the ends of their life, but also they denied their communities control over their death.

In Tk’emlúps, the Catholic church decided that neither their lives nor their deaths were worthy of being known, remembered and commemorated.

One of the more appalling acts by the Catholic church in Tk’emlúps was how the children were deliberately forgotten; they were omitted from the official records that would verify their passing.

Fellow Ontario blogger, The Furry Gnome, wrote a piece about the residential school system that covers the basics without being too long. I suggest that you read his post, 215 Children, especially if you are Canadian, because we have to own this. How can we be better if we don't?

The nation, provinces and communities have lowered the flag to half mast for 215 hours. This is our town hall.. 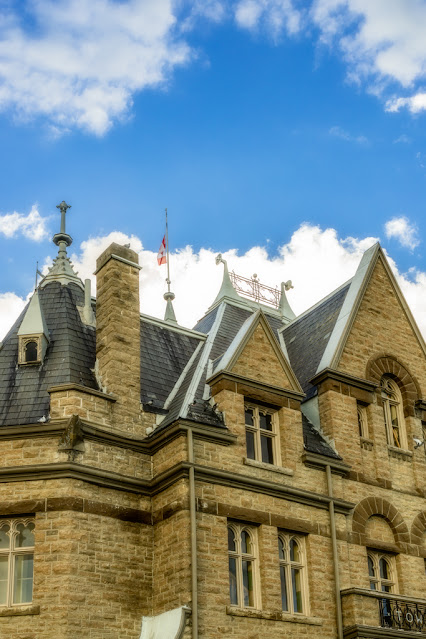 The library staff has tied 215 ribbons to the bridge by town hall. 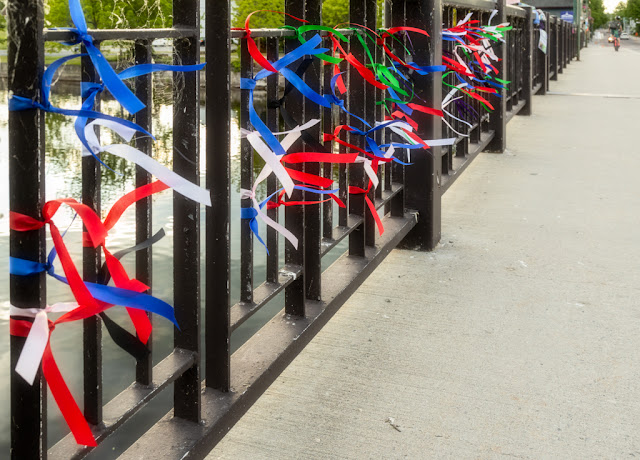 Behind town hall, there is an understated memorial of two pairs of children's shoes, shoes being the symbol that many are choosing to use in memorials across the country. It is laid over a permanent display of a circle of stones in recognition of those who have suffered domestic violence. 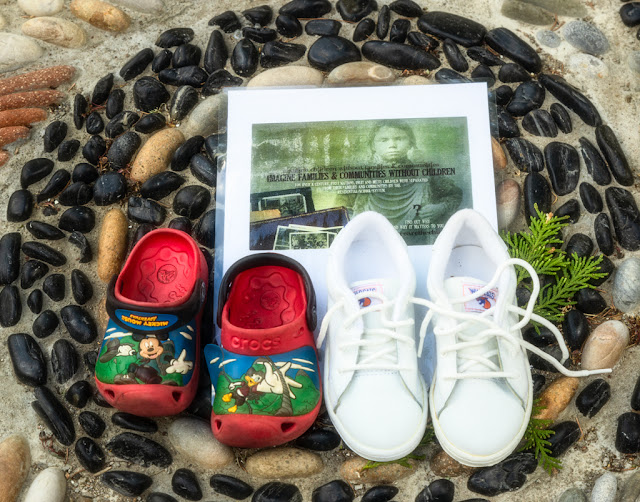 I have enlarged the photo portion of the tribute. Just imagine what it was like for both the children and the helpless parents and communities.

We moved on from town hall to an even more poignant display. A local school has gathered 215 teddy bears and placed then all along the fence. 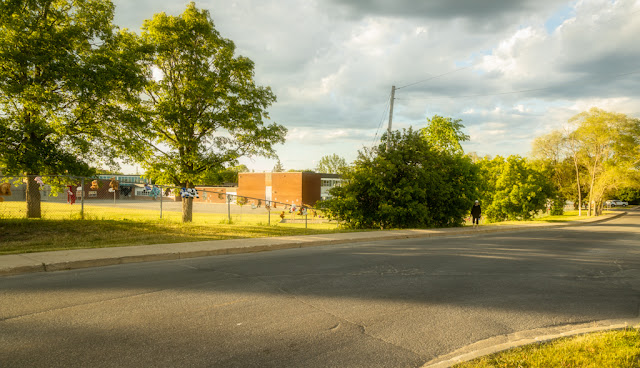 My photo doesn't even include all of the fence along this street, for there are more bears off the left of the frame. Then, way down to the right, they turn the corner and go all along the street in front of the school. It is staggering to think that so many children could be cast off and disposed of so ignominiously.
Here is a small section. 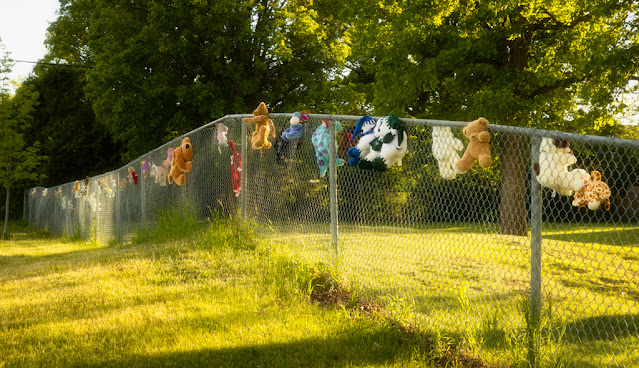 Canada has come a long way. By and large we are now pretty tolerant and inclusive, at least compared to many countries. But we could and should do better. We must come to grips with our forebears' ignorance and cruelty as well as the continuing systemic, poor treatment of too many of our first nations peoples.

Posted by Anvilcloud at 5:22 am

I listened to our own President's speech Monday, on the anniversary of the Tulsa Massacre, and he said the same thing, that we need to 'own it'. He's right. You're right about this situation. A country's history is not just the glorious moments. We all need to recognize those moments.

It is our shame to bear, our heartache to endure.

Thank you for writing this today.

There have been similar atrocities committed in many other countries, including the USA, which is all the more sad to know. The Nickel Boys by Colson Whitehead about a FL reform school is yet another disheartening tale.

Those poor families. And to find the Catholic Church involved yet again is a scary thought. It makes you wonder how many families are still going through this on this planet. All in the name of 'same'. When you read 215 children it is one thing, but when you see only a portion of the teddy bears on that fence, it really hits home.

It is heartbreaking. So much injustice calls for some kind of reparation, but those children are gone for good. :-(

It is sad that such things happened (in many countries in different forms)
What we have to do is to see that it never happens again. ..... anywhere.

And you know there are more such graves out there at the former residential schools.

Bravo. I haven’t been able to write about this atrocity yet.

I read about it here in Hawaii, too. Oh, it is so sad. Despicable.

It is unbelievable. Children. :( I wish we were better at owning atrocities in this country. We've had many.

Heartbreaking. And every nation has similar events that must not be forgotten, that must be owned.

That fence is really heart wrenching...as is the consideration of how young they were to have died far away from their loved ones. A sad moment to consider...and many more sad moments.

This is very harsh and sad. Thank you though for reminding us of this. It is important to not forget.

Thank you for this post, John. It's so very sad. And it's not just Canada. You know there were horrendous massacres here in the US and we've heard about other countries where these sort of things occurred in the name of civilizing? religion? what? sigh...

Systemic is a key word in your post. How many years have people been waiting to have water that they don't have to boil? It seems like to someone , water isn't important for aboriginal people

How many more bones do you suppose we'll turn up and still not treat everyone equally?

We have done the same type of thing here in the US to the Native Americans and also horrible things to the African Americans and the Japanese citizens over the centuries. Humans need to own up to what we have done to each other all over the world.

Many have known for a long time. That is the shame of the cover ups.