I will not keep going on and on about the derecho event, but I must conclude with some random bits and pics.

Before I forget, let me say how lucky we were. If we had to lose power for 4 days, this was the ideal season. We did not have to contend with the cold and snow of winter. The house did not go cold, and the pipes did not freeze. We also were saved from the heat of summer when the lack of fans and air conditioners would have been mightily difficult to bear.

Our initial damage was minimal. As you already know, we lost some roof shingles, but it was a relatively small patch. The fences were pushed around but, somewhat miraculously, remained upright. We lost half of our lilac bush. The trees in both the front and back stood. 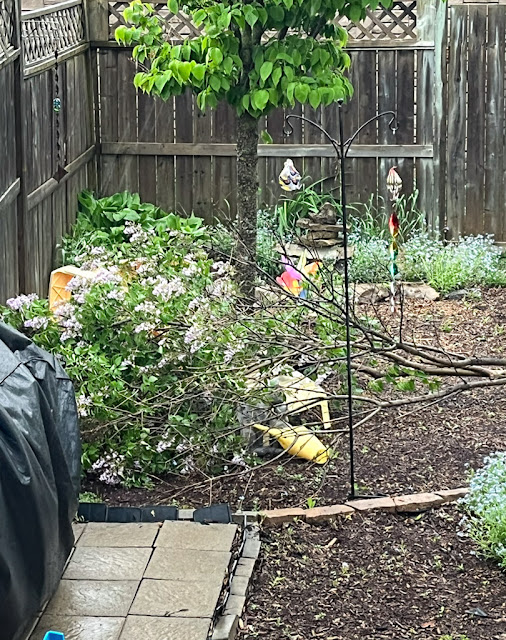 Monday is the day when most of Sue's photos began and when we all set off to Perth for coffee. We enjoyed English muffins and came home with ice and recharged power packs. 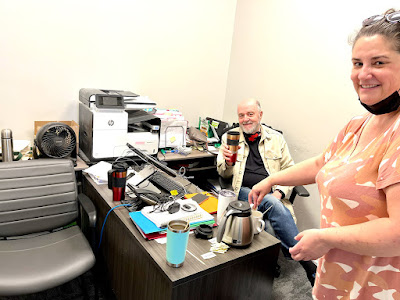 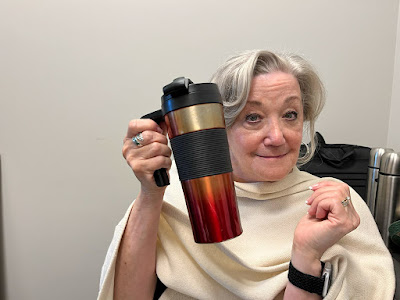 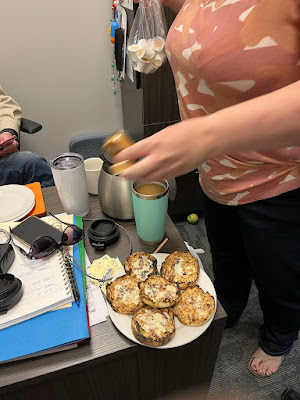 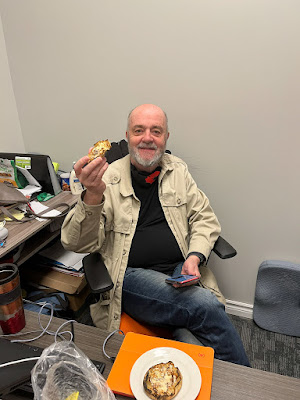 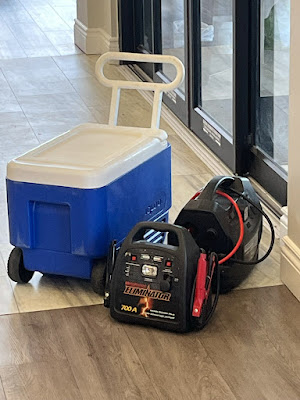 Tuesday was the day of coffee and tea by means of the camp stove. Sue had tea. I had instant coffee that seemed delicious. It came from packages that had previously been gratuitously added to grocery pickup orders as a thank you. Who knew that instant coffee could taste so wonderful? 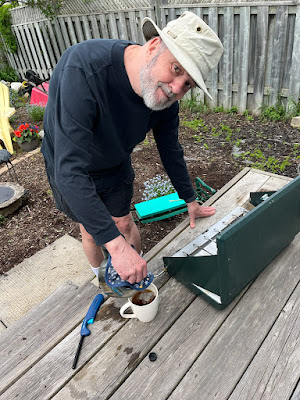 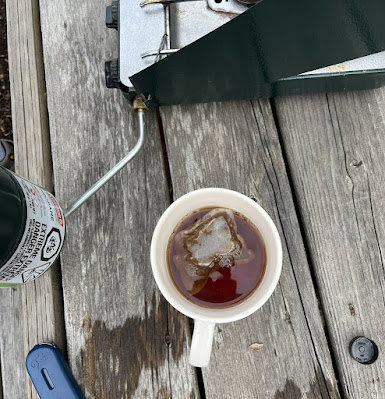 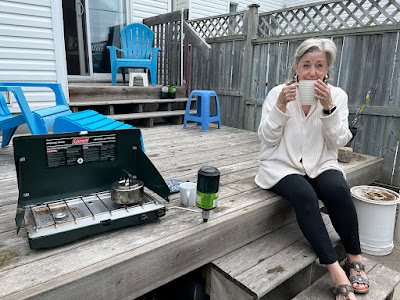 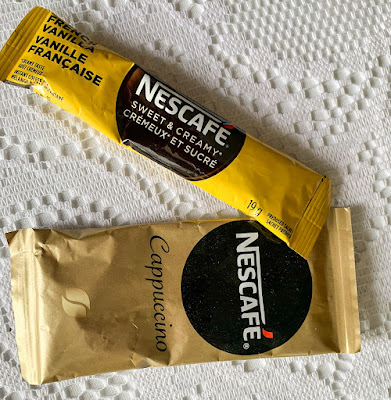 Tuesday was also the afternoon when people came knocking on our door. They were enterprising  roofers who had seen our bare patch. While I am not normally amused by strangers cold canvassing, especially to sell things, this was a godsend. We knew that most roofers would be busy with major repairs for some time, and we didn't know how long we would be left with our little bare patch. Sue, ever with her phone at the ready, took one picture, and then the young woman posed for another. 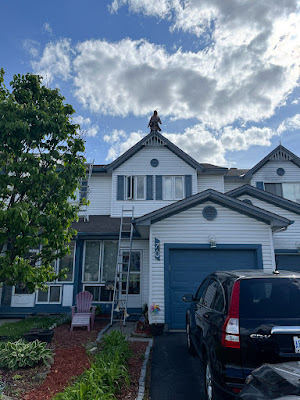 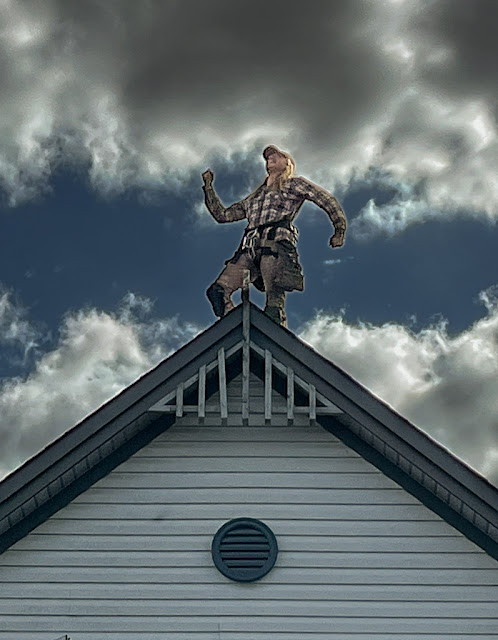 Tuesday was also the day that Shauna brought pizza  from Perth. It wasn't hot by the time it got to us and then by the time that we got to it, but any port in a storm. 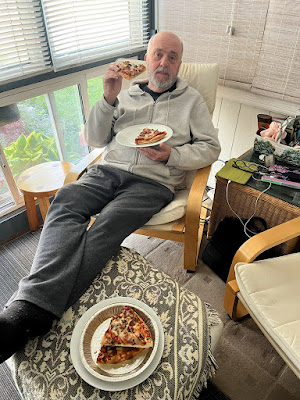 After pizza, we gathered the spoiled food. These were some of the boxes. Fortunately, garbage pickup was the next day, so it didn't have to sit for long. Normally, we are limited to one bag per week unless we were to purchase additional and rather costly stickers. An exception was made this week. Food is heavy, so we used multiple, lighter bags out of deference to the collectors. I will add in passing that we had managed use the bbq to save a lot of chicken before it thawed too much for too long. It was touch and go because the propane ran out. Fortunately, however, when we cut open the chicken, it was cooked sufficiently with no pink to be seen. 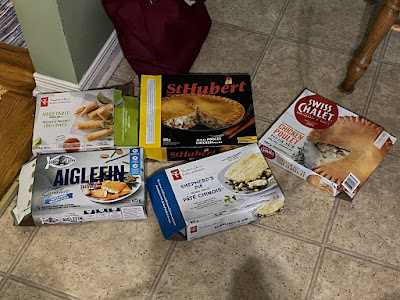 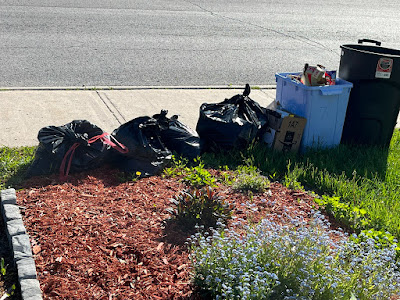 I was especially thankful for the restoration of power on Wednesday, for I was able to shower before my medical appointment, also in Perth. Then, we dropped by Shauna's workplace to return the borrowed charger. Sha tries to take her boyfriend's dog, Lola, to work once a week. We had as little playtime before heading home where we could make all of the tea and coffee that a body could want. 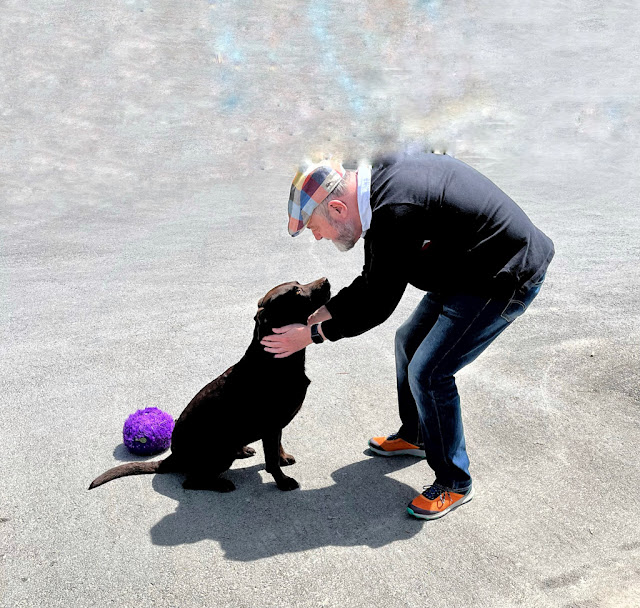 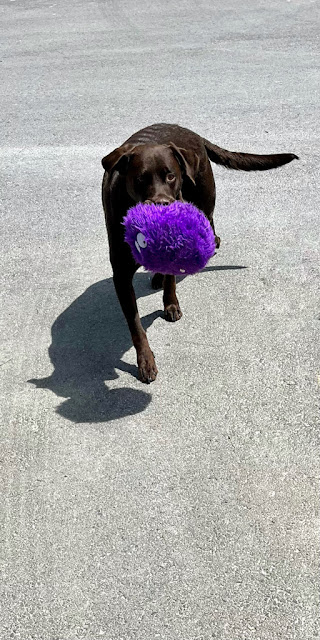 Good record of your adventure without electricity. You survived the derecho!

It often takes a natural disaster, sadly, to realize how dependent we are on having power. And, as you noted, losing electricity in this season was preferable to winter. Thanks for the posts detailing your survival methods, AC.

When we lost power for 4 days some years back, it was also between seasons so we didn't suffer too badly. I was able to get my coffee fix in town where they had power. You were very lucky, too!

Turning on the tap & getting water, switching a lamp on & getting light, certainly privilege's & when they don't work, we realize how blessed we are. How fun for the seniors to have a furry visitor every week. Animals, IMO, there's another blessing in our lives.

When the power, rarely around here, goes out, you really notice how quiet it is. No humming appliances, furnace, anything.

It's been quite a time. Bells Corners is taking a long time.
I kinda getting tired, with all that's going on, but we are managing!
(ツ) from Cottage Country Ontario , ON, Canada!

Those roofers were amazing fellows! That would not happen here. We'd be waiting. For months.

Glad you have power again.

You're right that if you have to lose power, the season (weather) was right for it. What an adventure! Sue and you handled it with aplomb and with creative thinking. I'm quite grumpy after only a couple hour power outage although in the derecho situation, I would join you in being thankful for minimal damage. We have many milder windstorms and I do not enjoy them.

It is depressing to think of all the food that went to waste. it is a good thing that we do not lose power for a long stretch very often, because I think most of us have a stash of frozen stuff. Luckily we have a big generator that runs the refrigeration, some lights and the pump for the water, making us quite self-sufficient as long as the gas (oh, ouch!) for it holds up.

So glad that the weather cooperated. Hate to lose food, though. That happened to us recently and it cost a lot. I have learned not to store food for a year's worth of meals!

Interesting to see how you coped. That stove and BBQ came in handy.

The photo of the woman on the roof is downright scary with those big dark clouds behind her! I loved seeing all of these, AC! You guys did well, all things considered. You're right about the season being the right one. When Rick lost power on December 23, 2013, he was out of power for 11 days! My house was on one of only two blocks in our area that didn't lose it!

What is the purple thing that Lola has? I am presuming it may be a dog toy, but it looks more like a car washing sponge, so I am not sure.

That sure makes you appreciate electricity. Glad you were relatively unscathed.

It is lucky when you lose electricity, but you don't need heat or AC. It seems like such a narrow window of time in which you can still be comfortable at home without those modern conveniences. Nice job surviving!

Glad you came through the derecho So well, AC.

We bought a generator a few years ago and it has paid for itself several times in grocery savings alone. The time of year doesn’t matter either.

Good attitude as you don't get carried away with all the little hardships. However , that's not saying that it wasn't a stressful time.

Thanks for the roundup. Sounds like you made out ok despite the expense of roof repair and spoiled food. Watching the weather tonight and there's another line of storms which may hit you. We will be on the eastern edge of most of the power in this one.

You could be in charge of a boy scout or girl scout troop just fine! Doggies make things better. Linda in Kansas

I actual know a few people who likes there instant coffee.
Coffee is on and stay safe

I'm so glad you were able to weather this storm so well. And how wonderful you had roofers available so quickly.