How is it that I found myself wearing moose hide and holding a rose yesterday?


Sue too — at least the rose part. 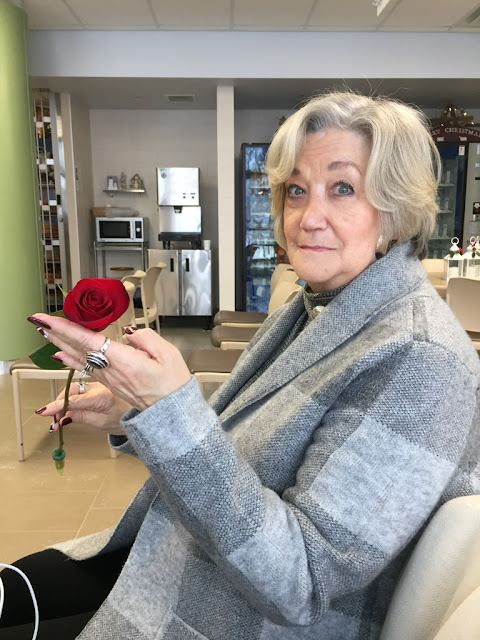 This is what the moose hide represents. 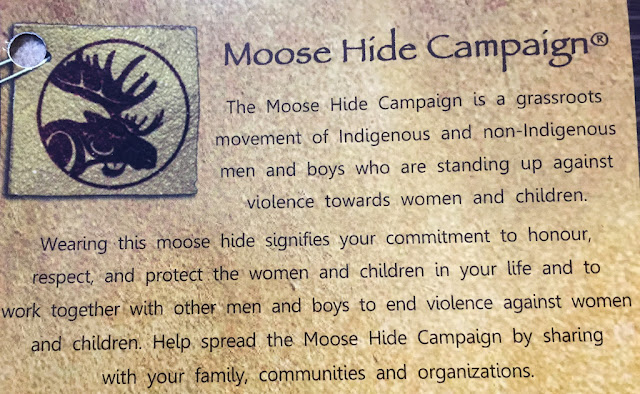 The day had begun early with a snowy trip to the hospital of a nearby town. This is a photo taken from the hospital once we were settled in. The highway conditions hadn't been as bad as on this side street, but they weren't stellar either. 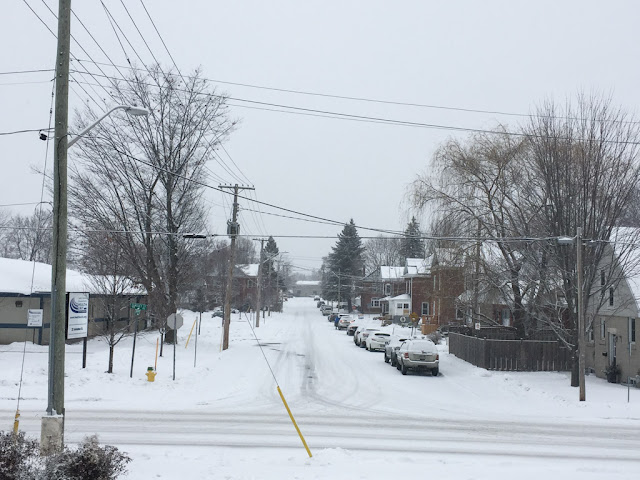 While the person we drove awaited their procedure upstairs, we settled into the waiting area by the lobby. Soon, perplexing things began to occur. Tables were moved; purple cloth was laid on what was obviously becoming a display. 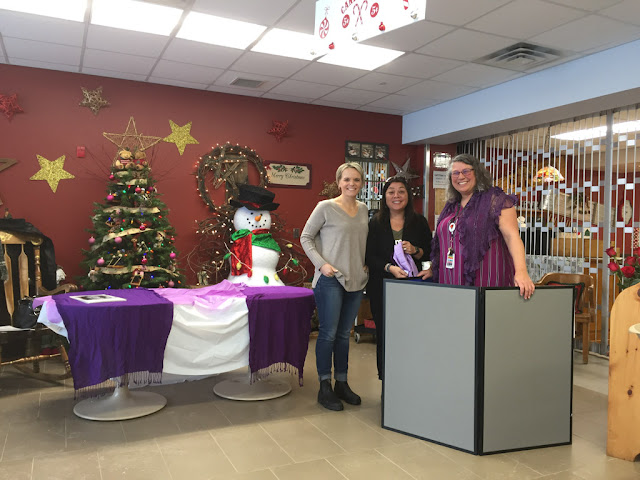 When we wondered what was transpiring, it was explained to us that there was to be a ceremony for the National Day of Remebrance and Action on Violence Against Women, for it marked the 30th anniversary of the shooting of 14 women at l'École Polytechnique de Montréal, where women were murdered just for being women.


On December 6, 1989, Marc Lépine entered a mechanical engineering class at the École Polytechnique and ordered the women and men to opposite sides of the classroom. He separated nine women, instructing the men to leave. He stated that he was "fighting feminism" and opened fire. He shot at all nine women in the room, killing six.

The gunman then moved through corridors, the cafeteria, and another classroom, targeting women for just under 20 minutes before turning the gun on himself. It is the deadliest mass shooting in Canadian history.  Wikipedia

During the ceremony, a photo of each victim was held and a brief biography was read. 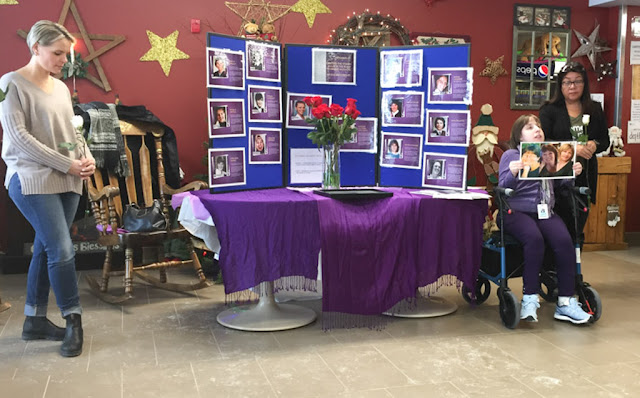 After each reading, someone in attendance would come to the front and place a red rose in the vase. I have no photos of this, but this is why both Sue and I had been holding roses, for we were asked if we might like to participate since we were stationed there for the morning. Of course, we were honoured to do so.

That was also when I was asked if I would like to wear the moose hide to show that I was standing against violence toward women and children. Yes, I would.

After the ceremony, lhe ladies left the flowers (in a less central spot) but moved on to take part in two other ceremonies. 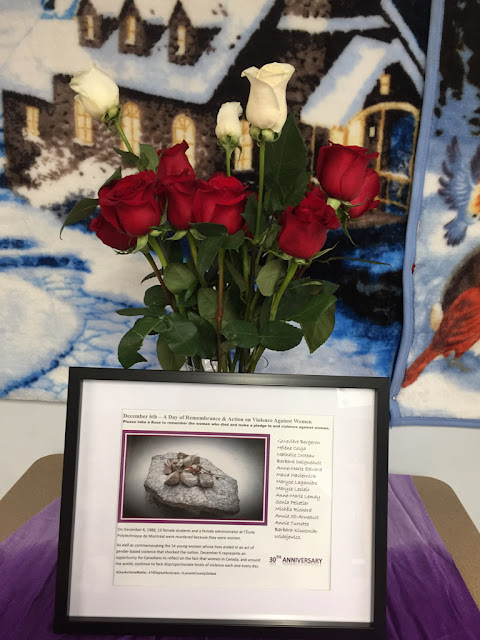 It was a poignant occasion that I am glad were were able to witness and join.
Posted by Anvilcloud at 8:07 am

The moose hide campaign is a great idea. Women can speak up but education and awareness among men and boys is the key. We have to work together.

A touching moment -- may the movement grow and proper.

I never heard of that shooting. What a very touching ceremony. I wish here in US we could change gun laws and stop the gun violence.

Great post, AC. I remember the slaughter at École Polytechnique. While any mass killing is horrendous, the fact that women were targets added to the pain I felt.
I had not heard about the moose hide campaign--thanks for once again enlarging my knowledge.

I never know where you were headed with this title. What a lovely thing to do.
Are you volunteer drivers? I've done that some.

The violence is atrocious. The mental health issues, as well. I just have to turn off the news.

Good for you. Anything that reduces violence; and there still is so much to do.

The moose hide concept is commendable from every perspective. Every year on the anniversary of the École Polytechnique massacre I despair at the extent of misogyny in society and I am reminded how terrible the consequences can be. Two lovely little girls live next door to us. I earnestly hope that by the time they become young women attitudes and practices will be seriously changing.

Thank you for joining the efforts for men to show other men how important this is. I'm always sorry to hear of (which this was the first I'd heard of this awful crime) mass shootings. The US is in a sad state with its gun laws...as well as the attitudes of many people toward misogyny and gun violence. And yes, mental health recognition and treatment is another problem we face. Glad you all got to take part in that ceremony!

My goodness, how moving! Wonderful that you supported such and important cause.

Wow! I REALLY like the idea of the Moose Hide campaign!!! I like that it is both an excellent cause AND that it is put forth by indigenous and non-indigenous m n and boys!!!! Very powerful!!!! I do not know if I can find any Moose hide here where I am in the US, but I may find a piece of some form of hide or leather and pin it to my coat to feel a sense of kinship to that cause.

I am very appreciative of how this sort of awareness seems so much more prevalent in Canada. I wish it were so here too.

I had not heard of this movement before reading of it here. What a good thing for you and Sue to take part in, and publicize. It is a terrible problem, violence, and a lot of work needs to be done in preventing it. That massacre in Montreal was a horrible tragedy.

Like others, I too had not heard if this massacre. It is fortuitous that you and Sue happened to be there and that you could share this information with more people. So many good causes go unheralded.

A poignant way to mark the day.

There's a memorial for those women and others killed by men here that I stopped at that day.

Thank you for adding your commitment to this important movement. It’s so very sad that violence and abuse toward women happens so often.

By the way, I’m in Maryland right now visiting with my son’s family. After that we’ll head to Illinois before returning home. My brother is staying with my mother now which is great. I haven’t been able to blog since leaving Hawaii, but I scheduled posts ahead of time. I’m experiencing the cold weather and dry air again. I’m much closer to Canada now. :-)