I continue to experiment with flower macros.

One would tend to think that it would be an easy task. I mean, the flowers are static, and there's no wind to contend with for indoor photos. You can take your time setting up the photo, supposedly getting the composition right, but then when you see the image on the screen, you realize that your composition isn't so wonderful after all.

In these two photos of chrysanthemums, I had to crop quite a bit because I just didn't like what I was seeing on the edges; they added nothing to the photo and actually distracted the viewer. And I still don't like the first one because it's a cluster with nothing standing out very well. The second one I like better because the main subject is very clear and well separated from the background — but it still required cropping. 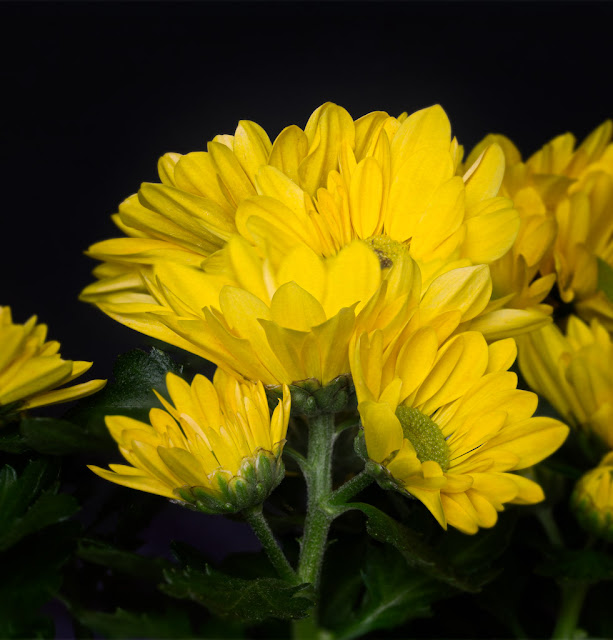 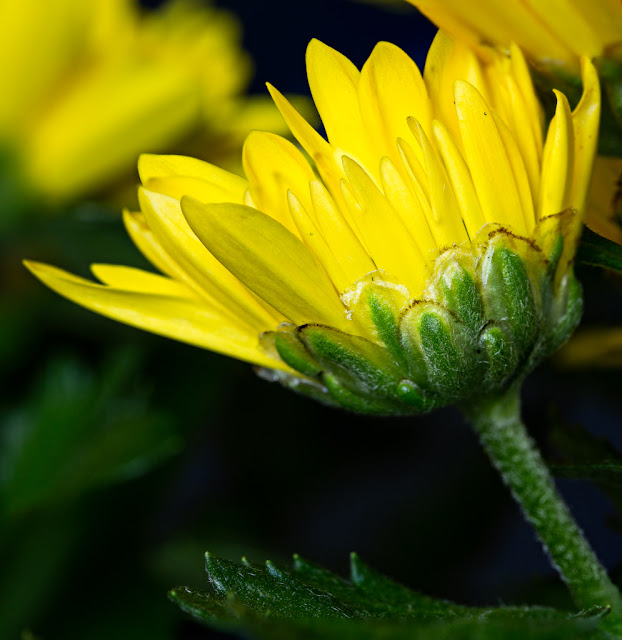 And here's another one that doesn't work. I thought that since blue and yellow are so complementary I would place some blue grape hyacinths against a yellow daffodil background. But I don't like it. Besides the colour and saturation, you will notice that nothing is particularly sharp. 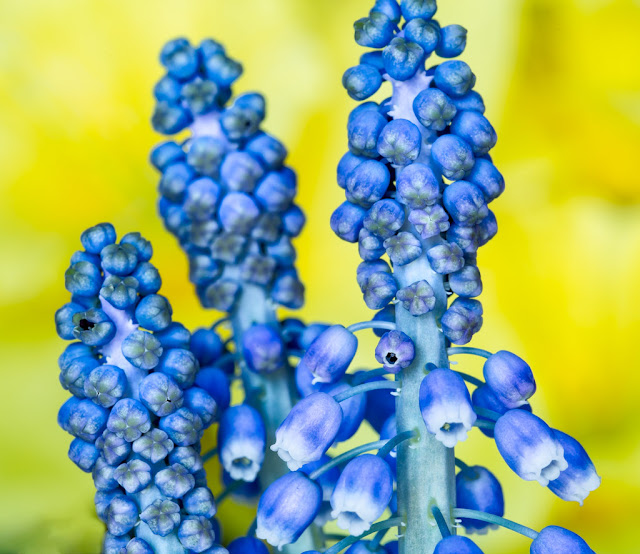 Sharpness and depth of field (how much is in focus) can be difficult. In macro work, depth of field is very narrow, and then if you stop the lens down (smaller aperture) to get more of the subject in focus, you tend to lose sharpness.

Here's a grape hyacinth photo that I like, but even then you can see that the top part of the flower is not in focus. That isn't always a problem because it's not so bad to have a blurrier background, but it does show how limited we can be.

To work around this, one can practice focus stacking. That means that you take several photos of the same subject, but you focus on a different part of the subject. You then use Photoshop to blend the various images together. For example, both of the chrysanthemum photos up top were focus stacked: 4 shots for the first image and 3 for the second one. 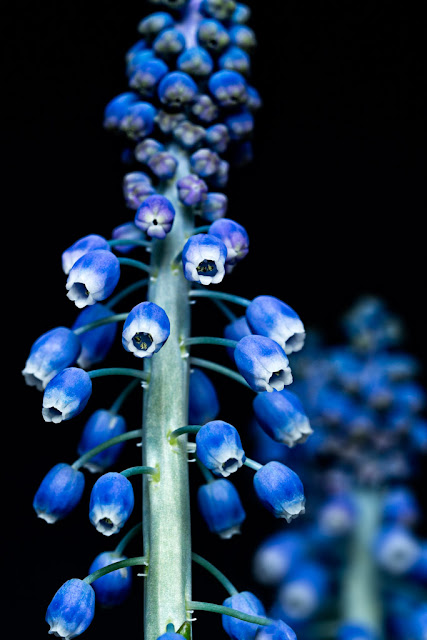 I lucked out a bit with this next chrysanthemum shot at least compositionally (in my mind at least) because I like the arc of the flowers. But that was more luck than anything because I didn't necessarily see it when I was composing the photo because I was concentrating on getting the group of 3 in the centre. 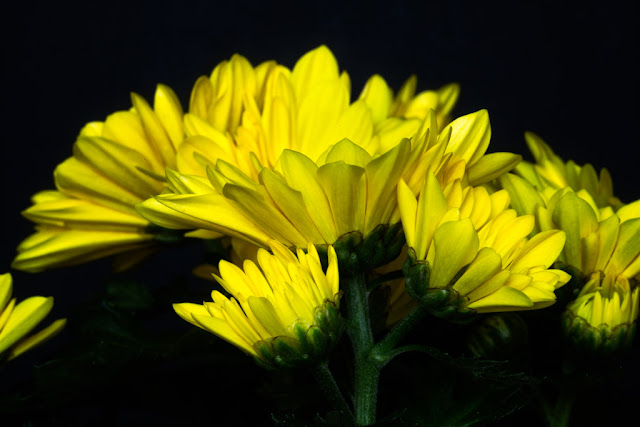 Oddly  enough, I am finding that photo of flowers in bud or decay are sometimes more interesting than those in their full blooms. 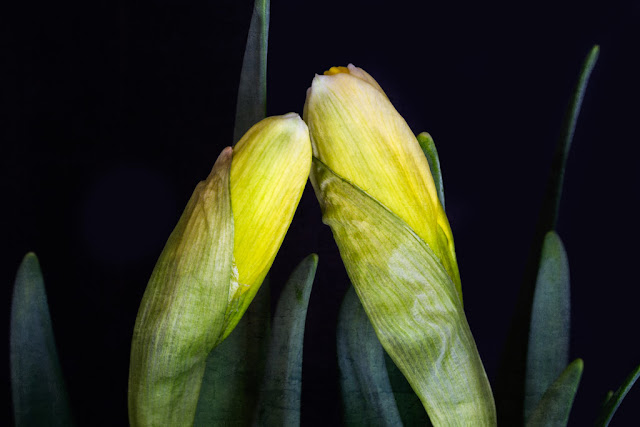 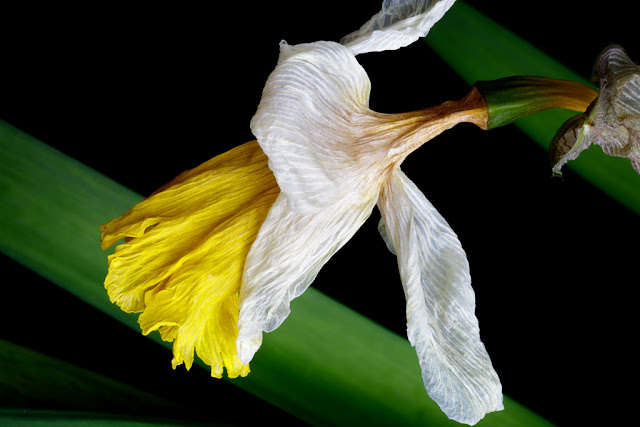 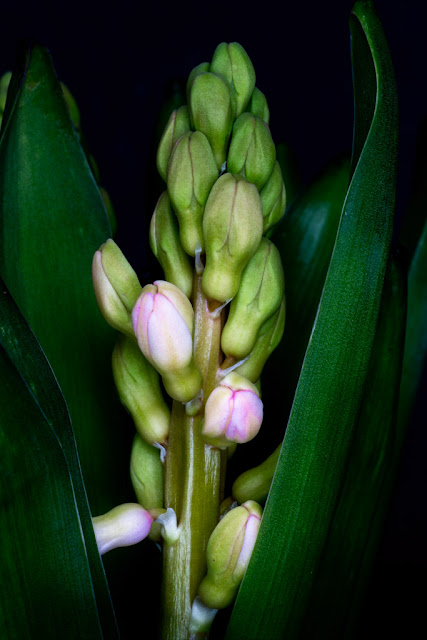 Many of these are a fairly long exposure because they were taken indoors (even though near a window), and a tripod was certainly a necessity. I also use manual focus where I zoom in on a particular part of the flower in magnified mode. Still, I don't always nail the focus. I also use black foam core as the background because having my kitchen or whatever back there wouldn't be a great idea.

I probably should acquire a ring flash to mount on my lens to add a little bit of light and to reduce exposure times.

But I am enjoying the learning process.

I like the dying daffodil the best -- it tells a story.

Lovely, no matter your thinking. I'm not adept enough with photoshop to do much with my images, but I admire yours.

They are lovely photos . I used to do Macro as well with bugs and flowers it is a tricky and challenging type of photography but since I do a lot of nature and bird photography Macro just wont cut it lol ! Macro photography is photography magnified. It is generally recognized as “macro” when you are increasing the size of an object in your picture from about half life-size, as represented on the image sensor, to five times life-size . Thanks for sharing have a good day !

All a bit complicated for my tiny brain. But I really like the end result!

I admire your technical expertise and patience. I've never been able to get past Autofocus. And now with my phone camera, I just point and shoot. Some photos are fine, but I do miss my "regular" camera as the shots were better. I find it easier to leave the bulky camera at home. {{sigh}}.

And you using a tripod! Wow. Good for you - makes for better pics.

Thanks for your comments on my blog. I go to the slow Aquafit classes; most of the ladies are white-haired and a couple come with walkers. I'm actually one of the younger ones (at age 66). Yup, Beatles, Rolling Stones, Monkeys - lots of fun groups back in the 60's.

I actually was fortunate enough to go to the one and only Beatle concert back in 1964 (I think). I was 12 years old and my friend's Dad somehow got tickets for the afternoon performance. He drove us to the Forum and picked us up afterwards. It was quite a thrill. Something I will never forget as the Beatles never returned to Montreal for another concert. And of course, we screamed our heads off - like everyone else there. LOL.

I never thought of the photoshop thingie. I guess I'm more quantity, than quality!

Neewer photography products have a wide variety of photography equipment which will surely help you to get the perfect click.

Shop from USA to India Wide Variety of imported Products at Online Indian Market with Cheap and Best Price.