A Flower from the Dad

Sometimes I surprise myself at how maudlin and sentimental I can quickly become.

The other day, Lady Bug (daughter #2, for those who don't know) called and informed us that she had wiped-out badly on her bike. She bikes in traffic in Ottawa, so my heart missed a beat or two when I overheard snatches of the news that she was passing along to Mama Cuppa over the phone. I heard Cuppa gasp words like accident, wipe-out, traffic, scrapes, X-ray, and more. Almost immediately, my eyes filled with emotional tears.

It was an unreasonable reaction because she was clearly alright, albeit badly shaken. But the dad's mind immediately went to the dark places of could'ves. She could've wiped-out while travelling in moving traffic rather than at a traffic light when the cars were stopped. When she fell and rolled, she could've rolled into and under traffic rather than towards the relative safety of the curb.

That's what happened, friends. It was a rainy day, and her tires lost their grip as traffic began to stop for a red light. She doesn't remember falling, just rolling and getting up. Scary stuff indeed.

We called again that evening, and I spoke to her, and she assured me in a too-chipper-to-be-genuine voice that she was fine. Of course, she both was and wasn't fine. She was fine because nothing major occurred, but she wasn't fine because my little girl was shaken and upset. I know that she was trying to make us feel better, and I think that's pretty darn wonderful of her.

So, I got off the phone and convulsed again, and my eyes brim a little even as I write this now. Sometimes, I take my kids for granted and almost forget how much I love them. It shook me to the core to realize how close I could have come to losing one of them the other day.

I love you guys, both of you. And your partners too. I maintain my motto: We are a small family but a great family. So this flower from my garden and from my heart is for you Lady Bug, and for you Butterfly, and for The Boy and Powerpuff too. You're my kids dammit, so take care of yourselves. 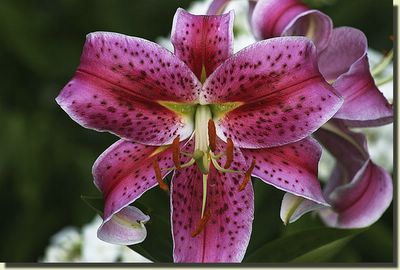 Posted by Anvilcloud at 1:00 am

I know what you mean, our kids are always our little children in our hearts, everything that happens to them affects us. So glad your daughter is OK. And what a gorgeous flower photo!

Amen. For as long as we breathe - we will be mommas and daddies and feel for our children.
I experience the same reaction as you AC :) We're normal, loving, attentive and empathetic (don't forget wise beyond our years) kind of people....better stop now while I'm ahead :)

Just been there. Two weeks ago today. Those words. "There's been an accident".

I'm way more than two weeks older than I was two weeks ago.

Hope she heals quickly, in those places that don't show.

Aww, that's so sweet. But we parents do that, get emotional over what COULD have happened! Glad she's OK.

Now I'm getting a little choked up too! I love it when a parent's love is as evident as yours, AC. Your children are lucky.

And I'm glad she's okay. I wiped out on my bike a couple of days ago too, but it was so minor, I didn't even bother telling my Mom. No need to have her worry :-)

It's funny how we can miss the obvious things sometimes. Love is so constant that it's often taken for granted, like good health or clean water. At least you got amore gentle reminder than many get.

It scares me to think that I'm going to have to go through this for the rest of my life! Even now, when TJ gets hurt, even just a little, I usually freak out more than he does, and it takes me much longer to calm down than him! The thought of him actually getting hurt hurt scares me to death! I still get choked up when I think about the time he fell head first out of a Wal-Mart basket onto the concrete floor! Just think of all of the accidents I have to look forward to! Lord, grant me strength!

You are too sweet, though...I love the flower!

I hear you. My son is 22 and there is no worry greater for a parent then the notion that one might outlive one's children. Two of my wife's brothers died at ages 9 and 17, respectively, and her parents have lived with that for decades. Our dear friend Woody was erroneously killed in 2001 by the police (see my site for details) and his ageing parents struggle with that reality daily.

We must use each day to love our children and also let them move on and into their adult lives. May we all be blessed with the natural progression of being survived by our offspring.

A very loving entry! It gave me a sparkling tingly feeling all over. I hope LadyBug feels better soon!

I think that the emotional responses you are more prone to now are a function of age. I have noticed that as I have gotten older these feelings are much closer to the surface than they ever were. I had an experience about 10 years ago, at age 45, that shook me. I was sitting on the sofa with my wife and started talking about my grandmother. She lived with us from the time I was 3 until she died. I was 23 at that time, no longer living at home, and remember feeling a sharp pain upon hearing of her death, but no tears. I loved her very much. Anyway, here I am 22 years later talking to my wife about her, when suddenly, I was overwhelmed and started sobbing uncontrollably. All the feelings for my grandmother that I had never expressed came surging to the surface. I was terribly embarassed, although my wife assured me it was okay.

Having kids, of course, adds a whole new dimension to these feelings. I would kill or die for my family. the most incredible feelings of protectiveness that I have ever experienced.

Recently, I had the pleasure of being awakened at midnight by a man who informed me he was an officer in the local police department, and was calling about my son. A heart-stopping moment, to be sure. I wrote about it in "Teenagers, a Cautionary Tale", if you want to read the scary, and a little funny, detalis.

Anyway, this emotionalism was definitely absent when I was a young man. In fact, looking back, I was a bit of a bastard (and I'm sure we could find a few women who would agree). I expect that hormonal changes due to the aging process has much to do with it. I think that men become much nicer people after around 30 years of age.

Oh Greg, you give me hope! My husband is turning 29 this coming week. Just one more year!

I feel a little silly that I'm only seeing this now....