Back here I bragged that one of my Flickr photos was picked up for a poster. Just today, the Trazzler website notified me that they were using a photo that I took at Canyon de Chelly (pronounced de Shay) in Arizona. Here's the link to the photo on Trazzler although I had to look hard for the credit which I eventually found below the write-up which is below the photo. 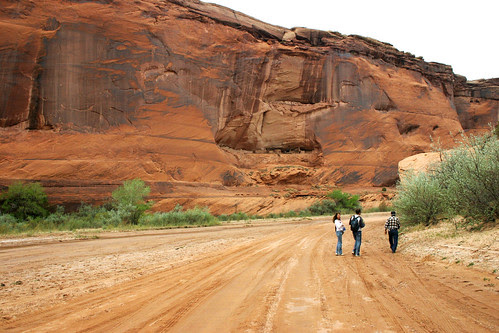 There have been one or two other photos that have been picked up here and there, but I can't remember which or where, which is one reason that I'm making mention of this now: aside from the fact that I crave attention, validation, and affirmation.

The Canyon, with it's ruins, which you can barely make out in the photo (look about an inch over the walkers' head and somewhat to the left), was the last stop stop on our week long Arizona trip several years ago. Since we ended up on a walking tour, we didn't see a huge portion of the canyon, but we did enjoy several pleasant hours, and I suppose that one ruin must be much the same as another. I think that quality over quantity can be a decent trade off after all.

The little guy on the right was our Navajo guide: old in years, but he was certainly fit enough and spry enough to leave me in the dust. The couple in the photo was one that seemed to be making a tour somewhat parallel to ours. Cuppa met them in Flagstaff where we were both staying as a jumping off point for our Grand Canyon visits. He was an Aussie who had been staying in England, and she was English. They were taking their time touring much of the USA before heading to and settling in Australia. A day or two later, they stayed at the same motel as us near Monument Valley. Finally, we met up at the visitor centre in the canyon. They asked us to join them on the walking tour that they had just signed up for, so we did although Cuppa hadn't understood that it was to be a walking tour. I thought she had agreed very quickly, and that was the reason. But it was all good.

Below is a closer photo of the ruins, and below that a short slideshow of these and a few other photos. 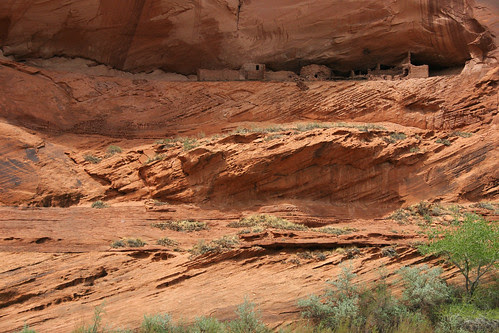 Those photos really ARE beautiful! The clarity!

Wow! Caves - we really are on the same wavelength! I can only say UG! GU! (see my today's post called 'Snow' for explanation).
Hot shots for a cold day, I see, Ta!

Those pictures are great!
Way to go!!

As close as we live to Arizona, we've never been...What a shame! Your pictures are gorgeous!!!hughugs

You've got quite an eye.
What interests me is that the two photos are so different, in subject, in composition, in color.
Maybe you should go pro!

Beautiful shots. I hope to see this area in a few months from now. Don't all the wonderful women in your life give you enough attention, validation, and affirmation, lol!

Lovely photos - and they should be brought out at every opportunity! Nothing to do with bragging etc, you take great photos!

Brag all you want! You've made these beautiful pictures and you are being recognized for them. Way to go...

I didn't realize that photos from Flicker were picked up like that. I thought they were there to share only. I trust you're being paid?

That is totally reaffirming! And well deserved!

Congratulations! I have to share these photos with Dave, who is an avid fan of trekking through reddish tough places.

The photos are awesome. Congratulations on having this one and the others picked up. I do hope they are giving you $$ as well as credits.

What other gems do you have hidden on flickr? These take my breath away. You have a knack for getting a good shot. You should be submitting these to photography contests or calendar publishers.

Thanks so much for sharing.

lovely. I know I have to go there now and take a walking tour.

Wonderful pictures.. it must be quite something to experience in person and on foot. :-)

Stunning photos, and congratulations on the poster pick-up and website!

They certainly SHOULD have published that photo! It's wonderful! And I can see the ruin plainly. Fascinating. I do want to go there someday.