A whirlwind visit ended yesterday when we drove the girls to the airport. Cuppa and I came home rather despondent and poopdicated, but when we got a call from Mom to see if we could pick up Nikki Dee at Day Care, where she goes twice a week, we perked up a bit. She was the tonic that the doctor might have ordered for flagging spirits as she screamed our names and ran to us in enthusiastic abandon when we entered her classroom. She jabbered in good spirits all the way home and for as long as we stayed for a brief visit with Mom. What a kid! It's so good to see her feeling better after several sickly and sometimes whiny weeks.

We've all been rather down with it here lately although I keep shaking my head and knocking on wood because I am the only family member not to be overtaken by the cough and cold. I have endured persistent sore throats, but that is not uncommon for me, so I've pretty well been the only semi-healthy person in two families.

So it was that I was facing a dilemma as the darkness began to descend late last Saturday afternoon. We had been having our annual tree-decorating get-together at the kids' place, but it was also Santa parade day in our town, and surely Nikki Dee would like to attend. For sure, Cuppa and Daddy weren't up to it and Thesha hadn't exactly been a picture of health lately either. However, just as I was internally deliberating whether I could manage Nikki Dee on my own, Thesha declared that she felt she should find the energy to take Nikki Dee. I quickly agreed to tag along and help out. I am so glad we both made the effort because the kid loved it, fussing when it was time to leave even though the parade was over.

Main Street always looks fetching at night because they light up the street all year. However, it looked especially inviting just before the parade commenced. 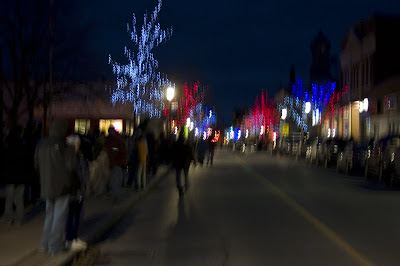 As we settled in and her friend joined her, Nikki Dee, somehow, ended up in his wagon while he stood and roamed. Both were happy with these arrangements. 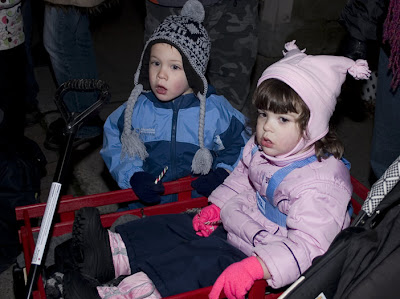 The parade began and Nikki Dee was in her element. She waved excitedly and rocked in the wagon to the music. 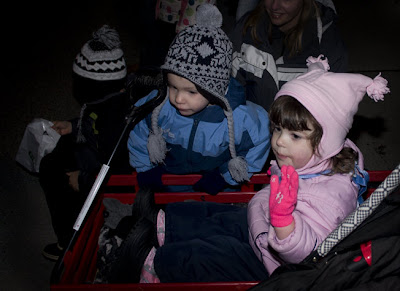 She craned her neck in anticipation of the next float and had a blast. 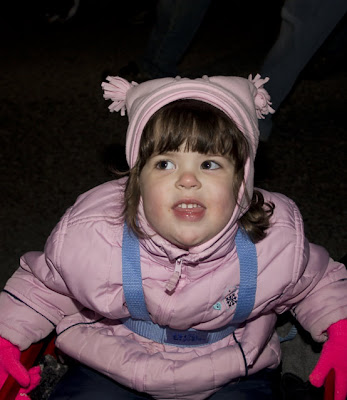 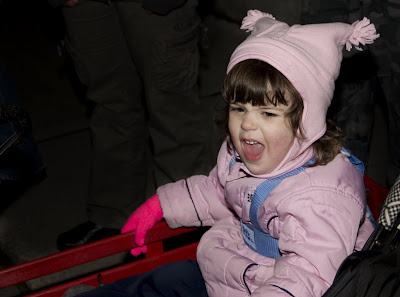 It was heart-warming and both Mom and I were thrilled that we made the effort. 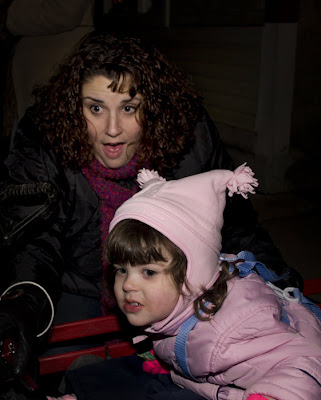 I'm sure it made Santa's and Missus' day too. 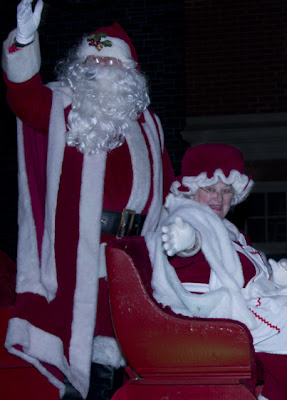 Isn't it wonderful how excited the little ones get over the Christmas parade? I remember those days well. A fun time.

I love the way your family blends both the Christian and Jewish traditions. D3 did a terrific job on the cookies. I'm sure she enjoyed it.

Wishing you and Cuppa a great day. Hope everyone is feeling better soon.

Well, I hope everyone Soon gets to feeling better again!!
Your "Girls" are Beautiful Ac!! SO glad you got to go to the parade!hughugs

The look on her face tells it all. I am taking Little Stuff to the Perth parade this weekend. Hope she is similarly enchanted.

Smudge does look so happy, and I am glad things are looking up in the health department with your family.....that cold and headache is horrible, I had it for 2 weeks and Sunday at church everyone seemed to be coughing.....ewwwwww
Have a wonderful day....:-) Hugs

Ah the lovely season of sickness is upon us! It's run it's course through our home too.
I do love a parade,ours will be soon.
The kids were adorable as well as excited! Love Di

Made my day.
sincerely, Clint

Love to see the kiddos get excited. Nothing like a parade to make you feel like Christmas is a pretty special thing that the whole community can share.
QMM

It is so wonderful to see the eyes of children light up at Christmas time. That is what it is all about. I miss those times and it makes me sad that my little grand is so far away at this time of the year. Thanks for the pics, ac.

What is a parade without a child in tow!? Your town looks just the right size. Great pictures. Hope your illnesses are done now for the winter.

Grandkids have given me a new appreciation of Santa's parade. Wonderful pics of Nikki Dee.. so very cute!!