A Short Story Made Long

That dadblasted Jinksy just had to post about her memory of Christmas Trees, and that got me into exploring my own memories. In the exhumation process, I thought, "I'll bet we have old pictures that I could post." That, my friends, caused me a few hours work: searching, scanning and fixing (a little) old photos. So, rather than a ten minute piece of prose, it became a project of several hours duration. It's okay, though, as I, bit by tiny bit, endeavour to add old photos to my what I call my heritage folder.

I suspect the following picture dates to 1956, but it is possible that I could be a year out on either side. Most of the tree is visible along with my maternal grandfather and my uncle (his son) in the frame. Grampa is holding the hockey stick that I must have received earlier that Christmas Day as I sit cross-legged on the floor. I had forgotten all about that print hanging on the wall. I liked it, but I don't think it came with us when we moved to Ontario in 1962. 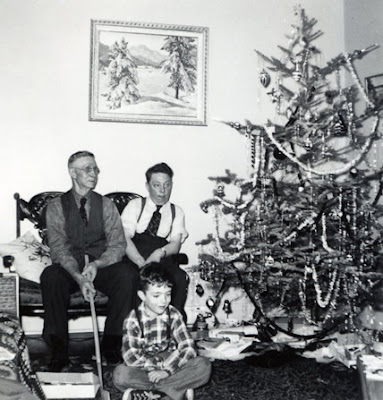 The next picture is obviously from the same Christmas, but includes my father. The tree, looks a little sparse and uneven, so you'd think it must be real, and you'd be correct. I doubt that artificial trees existed in 1956, and if so, they'd probably have been a lot more expensive than a real tree. In fact, I don't recall my parents ever using an artificial tree until they toned Christmas down a little later in life and decided that a little, artificial one would do just fine. That decision took place after another big move. Oddly enough, Cuppa and I decided that a little tree would suit us just fine after our big move a few years ago. 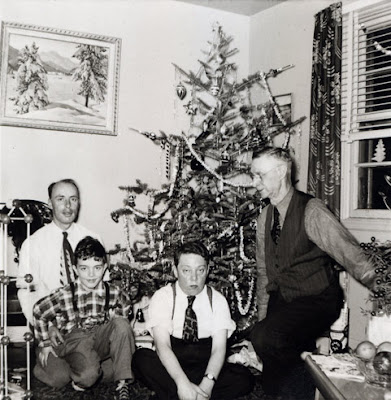 In the photo (still the one above), the construction set that I remember has been erected to my right (your left). I had recently described it to Cuppa, and, voila, there it is. In the photo below, it is 1958, and I am older. I think I was quite taken with the my wave, but somebody should have told me that it didn't suit me so well: too much forehead there. Maybe I was channeling Elvis. 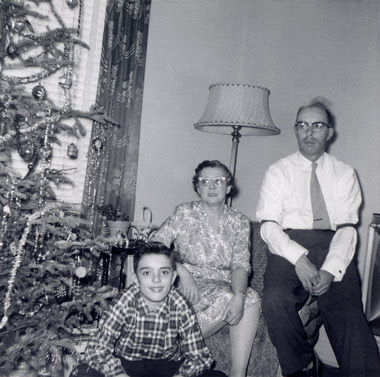 However, I'm supposed to be talking about Christmas Trees, and I'm being diverted by other things that I am seeing in the photos So, let's talk about trees. Aside from the fact that they were real, which I have already mentioned, I have one specific memory of actually getting a tree and bringing it home. It's just an ordinary memory, nothing special, except to me for some reason.

It was in the evening, possibly when I was ten, the age of the above photo. I remember walking a few blocks with Dad to a corner lot one evening. I presume it was after supper because he'd have been pretty ready for a meal after walking home after a full day of being on his feet at work. Maybe I remember because the guy who sold us the tree had a funny voice. I think he'd had an operation and been given some sort of mechanical device to help him speak. My father was very polite and gave no indication of anything unusual, but either he or I mentioned it on the walk home.

I don't remember that walk home, but I do know that we took the tree up the backstairs to our second-story flat. We would have left the tree outside to settle for a few days before bringing inside to decorate. The next photo is the 1960 tree with my Dad and Uncle Charlie ... 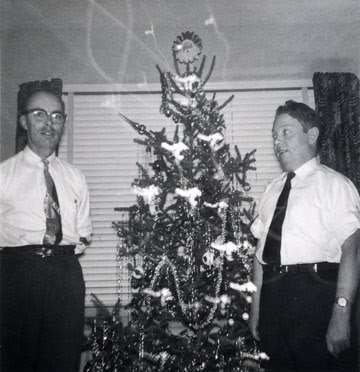 ... and here's my best friend, Nelson, by the same tree. (Nelson and I reconnected ten years ago. I wonder if her still reads this blog? He did for a long time but never chose to comment.) 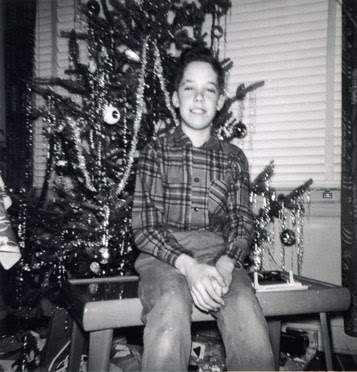 Finally, here's one with of mother decorating the 1961 tree, the last tree before moving from Montreal in 1962. 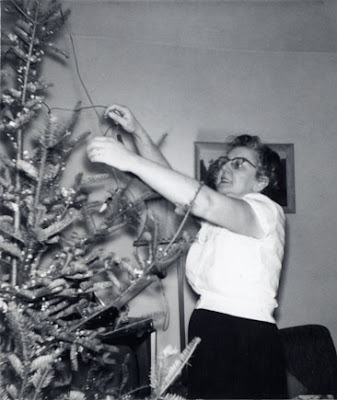 At some point in time, I became the main decorator. At least I was for one year. In the year that I am remembering, I was an older teenager and was put in charge of decorating the tree one Saturday when both my parents were at work. I had mentioned this to a girl friend (but not girlfriend) the previous day, and she offered to help. This was not to be permitted, however, because it was thought that nature might take its course with no adult to chaperon. Given the times, it was probably the correct decision but most likely unnecessary as I was not really attracted to this girl, and I never had any indication that she was attracted to me. However, I guess you never know.

Finally (PTL, eh?), to wrap up the narrative, Cuppa and I soon started to use artificial trees after we were married. Since, we always drove back home for Christmas, it was seemed only sensible thing to put up an artificial tree early in the month and also not have to worry about watering it while we were away.

I think I have a way of making a short story long — but only when I write, not when I speak.
Posted by Anvilcloud at 6:00 am

Morning Ac! Love the memories! We had one of those silver tinsel trees in the late 50's...maybe early 60's....complete with revolving colored lights. It Was pretty but I've always loved the green ones.
My sister always reads My blog and Never comments either...Why do they Do that??Hahaa...
Have a Warm and happy day!hughugs

I really enjoyed this post Anvil. Brings back a lot of Christmas memories for me as well.

I have family who read my blog as well, without commenting. They tell me they just don't want to join blogger which they need to do to comment.

My parents always left getting the tree to the bitter end and so none of my childhood memories feature anything as nice as the trees you picture. But, oh, I remember the tinsel - lead and you had to take it off strand by strand and save it for next year.
Handsome lad, you were.

Oo er, deadblasted sound nasty! lol... I remember that tinsel stuff Mary G mentioned - it was called 'Lameeta' or 'Lameta' over here, and was as slippery as an eel. Most of it ended up on the floor at the foot of the tree as soon as a door opened or shut, and created a draught! We never had a camera that could take pictures indoors - Dad's fold out, pleated wonder only managed outdoor shots, so no tree photos to jog my memory.

We still buy a real tree every year.
Your photos of your trees reminded me of my grandmothers trees. They were always sparse as well and I loved them so. I try to find one like it all the time but can only find the bushier type. It was fun seeing your photos AC.
Love Di

If you get an email that says I'm in London and needing to have money sent to be so I can get home, don't worry...I've been hacked!!! Just trash it!!!

Those pictures are priceless. I think I have a 1945 tree somewhere out there. If I go to look I will get off the subject like you.
QMM

Great post A/C....I remember trees like these and never had an artificial tree until I was widowed. I never could put my own lights on. I use to love hanging the tinsel one strand at a time and my mom's trees were always the best ever.....Great memories......
I can honestly see how smudge has a strong look of you, priceless...
.....:-) hugs

Hi Anvil i really enjoyed reading this post !! Full of fun..Great and happy christmas too..

I had some catching up to do. We also watched The Polar Express. That is the second time for me, which is not normal. Usually, I only view a movie once

I enjoy crosswords but find them a challenge. Sudoka is something I know nothing about but Michelle, my daughter, is crazy about them.

Your pictures of childhood trees and your relatives are awesome. What precious memories.

Thanks for commenting on my post today. The new insulin pens are awesome.

Have a wonderful day with Cuppa.
Blessings,
Mary

AC,
Some really great pics here flooding back Christmas memories. Good for you to have such a nice collection of the past. The tree reminds me of the one in "The Bishops Wife", a great Christmas movie back in the 40s starring Cary Grant, David Nevin, and Loretta Young. This is one of LadyCat and my favorite holiday movies. Catcha later, The Bach

Old family photos are such fun. You were a handsome young fella!
I could almost see my own family gathered around a tree just like that back in the 50's.

By the look of them your Christmas trees were cut from the wild. Farmed trees are trimmed and shaped to get the perfect shape. They look like spruce of balsam fir. I still cut mine from the wild on my property. It takes time to select just the right one as wild trees have lots of irreguarities.

All my old Christmas photos are on slides. I seldom see them. For $350 Santa could buy me a scanner that scans slides to become digital photo on the computer. If you see the old elf let him know.

I showed my mother the slides once and she discovered she wore the same dress to the family Christmas party three years in a row. Shame!

And yes! Heidi, the Grand Dame of a dog is indeed a purebred Great Dane, a real Marmaduke.

One cannot duplicate the smell of a real tree. But we have us the artificial variety for the past 30+ years. Interesting how you mark time by Christmases. Pictures were often taken so those memories do stick. Had to laugh at the need to chaperone dangerously hormonal teenagers.

What a nice little stroll down memory lane! I used to get a real tree, but for the last few years I've used an artificial one. I enjoyed seeing your pictures of Xmas Past.

What a great post. Loved the trees of Christmas past and the stories that went with them.

I love those old photos and more than the stories, just to see the young you, that is such a loaded thing. It amazes me to see you there. I can see the now you within that younger face, and vice versa. Somehow it is such a mind trip to me to try to put together our many selves over time. I love it! Thank you. What a treat.

You were a very cute kid. I think the Elvis look was quite handsome.