What's Been Keeping Me Busy

Just in case anyone might want to know what's been going on here in Anvilcloudia, aside from Christmas that is, for the past week, here's the news.

My computer is about a week old, and it's taken a lot of time to get it the way I want,and I'm not done. I'm plugging away but getting distracted a lot. It's okay because there is no rush. Although it came just in time for Christmas (or close enough), it wasn't exactly a gift, for I had been saving up for a long time, and this simply seemed to be the right time to make the purchase. Both Cuppa and I were running fairly old machines, and I could visualize them both flaming out at about the same time and was anxious to avoid that scenario by upgrading at least one while the upgrading was good, so to speak. 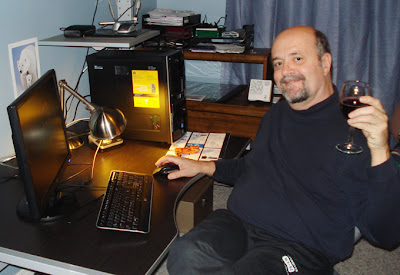 After almost a decade of using laptops, I reverted to a desktop model. You get more bang for the buck that way, and I am appreciating the bigger monitor (22 inches), even though my laptop had a 17 inch screen. Apparently, those who declare that size matters, are correct. We are now like many families and seem to be at the point where both Cuppa and I will each continue to have our own computer. Since I expect that hers will always be a portable laptop, I felt free to tie myself down with a desktop model with the multitudinous wires that it entails. Let's just say that I won't be moving it any time soon if I can possibly help it. I was able to afford a pretty high end machine, partly because I over-saved. Computers prices have dropped considerably since my last purchase, and I had set aside more than enough money to buy one with lots and RAM, speed and storage space. Therefore, it will take two months rather than one month for it to become an obsolete, old clunker.

Technology changes fast, not just the computers themselves, but the software. Today, I purchased and downloaded Photoshop, and despite having used previous versions for years, I felt like a tourist in a strange land because CS4 is so different than CS2. It keeps life interesting though. I ordered a Photoshop book and will manage to muddle my way through. 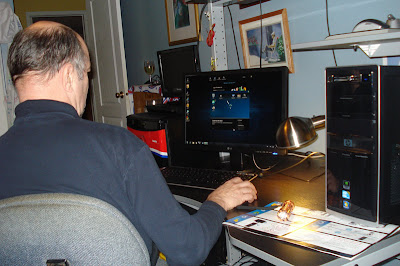 So, other than the usual Christmas busyness, that's what I've been up to. I must hie to bed now, but I promise to bore you with some typical Christmas pics very soon. It had better be soon because it's almost New Years for goodness sakes and it will soon be very old news.
Posted by Anvilcloud at 12:30 am

Computer looks great, what kind did you buy? I have an old desk top which I seldom use, can't picture myself on anything but a laptop....just curious why is it you feel you get more bang for your buck with a desktop? It won't be long before I will need a new one......and I haven't even started saving yet....:-) Hugs

I have been thinking about reverting back to a desktop one again. Although, it will be a lot harder to have it on your lap!
Yours does look very sleek and elegant though!

Bernie: you get more of everything for the same price or less. Desktops seem to be going the way of the dodo though (or at least changing) as they begin to emulate the Macs by putting all of the guts in the monitor. It's cute and stylish that way but more of a problem when things go wrong.

Congrats on your new(toy)tool. I see it is not a Mac. I have CS4 and have never taken the time to figure it out yet.

I will definitely have a desktop when I buy a new computer. I am comfortable with that and do not want to put my lazy self through trying to deal with that rolly thingie. Enjoy and we expect great writing now and even greater pics.
QMM

It's been about 10 years since I had Photoshop. I imagine I'd have to go back to school to figure out all the new stuff.

Congratulations on the new computer!! HP? I know we'll all enjoy all the photos you'll be able to load!!hahaa..I Still have a seperate external hard drive for mine though...don't want to slow down the computer...Enjoy!!hughugs

My computer is old, old, old and way too slow. When I replace it, it will be with a desktop. It's probably for no other reason than it is what I am accustomed to.

when I bought a laptop, it was too big for my lap. May things stay that way.

Both Linda and I use laptops, that way we can at least be together in the same room while blogging. lol

I've been given a hand-me-down computer which is three years old, as opposed to the one which my son tells me is the grandaddy of all computers. But thanks to his expertise, it's kept me in touch with Blogland for the whole of 2009, so I'm not complaining...or at least, I won't be once he's sorted out how to get all my stored stuff onto the 'new' one without losing anything! Thank goodness for generous friends and an IT techo son! :)
Good luck with learning the ins- and-outs of your shiny new model!

Laughing about the immediate obsolsecence comment. So true.
In our household I have the desk top and he has the laptop - mine is a year and a half old and his will be traded this winter/spring.
I hope you got a detachable memory storage; photos are hugely heavy and vulnerable. I lost a whole year's photos (I was almost ready to back up) to a virus in '03. Now I back-up the raw files as soon as possible.
I like the glass of wine; if I drank anything but black coffee while sorting the wires, I would vanish from the internet.
Have a happy, happy New Year's celebration and all the best for you and your new flying machine in 2010.

AC,
WOW... congratulations... a new computer.... sounds like you have the patience of Job! I myself get very frustrated when trying to find my way through unfamiliar territory. Great pics! And A Happy New Year !! The Bach

Congratulations with your new computer! And - enjoy your glass of wine!
;-)

Thanks for sharing 2009 with me. Happy New Year to you and your lovely family!