... and I think I was Happy enough whilst doing it.

I wanted to reminisce about hooking this Christmas stocking earlier, but it was stored at Thesha's, and I was unable to retrieve it to take a picture. So, when it came out of hiding on Christmas Eve, a miracle occurred (as befits the season), and I managed to remember to snap a photo. As best as we can reconstruct the past, I would have hooked this item in the mid-eighties, so it is the best part of twenty-five years old. It is hooking too, as in rug hooking and not as in knitting. 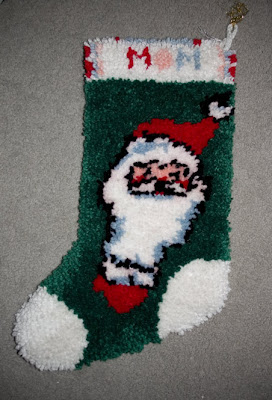 Thesha, our oldest, received a kit in late childhood or very early adolescence, and made a very nice stocking for herself. She followed this us with one for her younger sister, Althegal, although, if memory serves, it was Mom who finished it. Next year, we think that Mom bought a second kit and hooked a stocking for me. Come one more December, memory tells me that I didn't want Cuppa to be left out, so I took up the cause and laboured on a stocking for her. I can remember sitting in our brown reclining chair in the family room by the side door and hooking happily.

My stocking and Cuppa's follow the exact same pattern, but we both free-styled at the top where the pattern simply called for plain white. Although I certainly didn't mind the exercise, I must confess that everyone in the family has since renounced hooking. I mean, it was fun while it lasted, but hooking is not something that you want to make your life's work. At least we didn't.
Posted by Anvilcloud at 4:30 pm

...I must Also confess to have been a ...hooker. Yes. A stocking, the Same as that one excepr the stocking was red and not green...amazing!
It Was fun but after that late 70's project, I Never...hooked again...LOL

AC,
I have a hooked rug right here by my desk that my daughter did while in jr. high. It is a duck for dear old dad. She did it all by herself which adds to the sweet memories. Hope you had a great Christmas and Santa brought you something. Hope you get to see Dr. Zhivago some day; it is a great movie for you and cuppa to watch.. somewhat long, but great fictional story on a sad era. Best to you! The Bach

I was never a hooker, but my kids got kits from my mom, and had great fun. My mom made a piano bench seat cover for us--I believe it was lime green with velcro strap. Must have been 79 or 80. Great memories, thanks. Now I'll have to dig up a photo!

I have tried it all, yes even being a hooker. Did a rug with three huge eagles on it one time. Have no idea where it is. Nice to be back to normal now. Happy New Year to you and family.
QMM

That was thoughtful! I think we all had kids go through the phase.
I still have the hook somewhere. Never know when the urge will strike.
Nice work!

Very nice AC! I have crocheted a few stockings but never tried hooking. My mom did it years ago, I just never got into it. But yours is very nice indeed! Love Di

Is it true what they say, once a hooker always a hooker....never mind the stocking is lovely...Hugs

Well, the title is certainly one to draw you in! I didn't know what to expect. I've never been a hooker, or a crocheter, or a needlepointer or a seamstress. I've always been a knitter. Hm. I might knit a stocking now!

Whatever: the stocking looks lovely, especially since it has those memories for you and all those stockings were made by you and the family!

I have come across one or two men knitting and it gave me a start each time. I likely would have looked twice if I had seen you hooking...
Why? I would have had a similar reaction if I had ever seen my dad wash dishes. You did a fine job. Now, I have a pattern for dishcloths you may want to try.

I liked the part where your manliness gave way to humanliness.

I did a Tigger pillowtop which I still have, but I haven't done any hooking since. :)

Most Norwegians weren't "hookers", in the old days at least. However, the American culture has, as we all know, had tremendous impact on our culture and way of doing things...as in all other parts of the world. So, now we've all become "hookers" - hooked on both Halloween and the stocking-business, eventhough Norwegian children get all their presents on Christmas eve, after dinner that is. So what's in the stockings on Christmas Day, then? Well, as Garfield (another of our American adoptives) surely would appreciate - candy, candy, candy...
(As for the information: Being a hooker is not illegal in Norway. Nevertheless, our Social Democratic government has recently seen to that "purchasing benefits" from one, is..)