We now have a wee bit of snow on the ground with, perhaps, a dumper coming tomorrow morning. It's arriving a little late this year — late for this area at least. This will be our fifth winter here in Eastern Ontario, and in other years we've had snow by now: sometimes quite a lot. I don't mind the snow, but I also don't mind that it has taken its sweet time getting here this year as it might feel shorter on the back end when it tends to overstays its welcome.

Snow at this time of year takes me back to a Magical Snowy Christmas five years ago. At that time, we still lived in Sarnia at the southwestern edge of the province, about a seven hour+ drive to Ottawa. It was about a week later than it is now when we drove partway to Eastern Ontario before stopping at the cottage. We intended to stay there for a week or so and enjoy a winter holiday before continuing the journey. Sarnia is almost as far south as you can go in Canada, and it isn't terribly cold or snowy (in Canadian terms understand), so we looked forward to enjoying a more wintry time at the cottage. We were not to be disappointed. 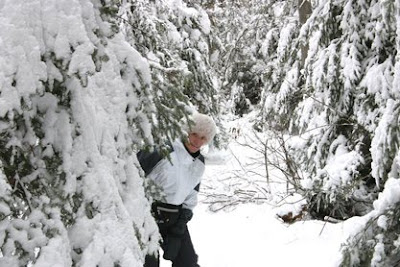 Once we were within about an hour of the cottage we began to notice some accumulation, which seemed to grow deeper and deeper the closer we came to our destination. The cottage region had received a significant snowfall over the previous night, and let me assure you that freshly fallen snow in the woods is, indeed, magically delightful. So, it was upon recalling that winter, I perused my archives, found the above photo of Cuppa in the snowy woods a few days ago and set it as the background wallpaper on my computer. Since I still can't stop thinking about it, I thought I'd share it with you too.

We had a lot of fun that week, even when Cuppa lost her snowshoe and got stuck in the drift along the riverbank. She required assistance, but I took enough time to get this photo before helping my lady in distress. 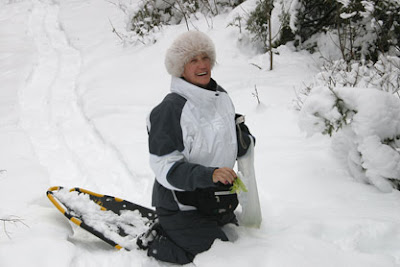 It was a memorable winter retreat that year, which we've never managed to duplicate. Perhaps, I will post some further recollections in the coming days.
Posted by Anvilcloud at 4:30 pm

To be surrounded by all that snow sounds delightful and it certainly looks very picturesque. However I also remember all the effort it took, clearing the snow from around your home last winter. Maybe you'll get an easier time this year if the snow is starting later-or doesn't it work like that!

Snow can be so utterly gorgeous, can't it? And so is Cuppa there. Fun! I have wanted snowshoes for a very long time. On my wish list...some day.

does that woman ever take a nasty-looking photo?
have I asked you that 6 times already?

Looks like you two were having a blast!! It Does look FUN!!hughugs

Beautiful pictures of cuppa and it does look like she is really enjoying playing in the snow...we are having an arctic freeze, already have tons of snow with more on the way tonight....but it is Christmas. I don't mind the snow, nor even the cold but oh I don't like the wind, it's brutal.
.....:-) Hugs

I will be glad when it snows here. We had 1 inch of rain today. It is cold and dreary and would be much more beautiful with snow. Those are beautiful pictures. A pretty lady for sure.
QMM

Loved reading this , AC-and seeing these pictures of Cuppa!

It is very beautiful!

This looks absolutely beautiful but I prefer to remember it than to actually live it !! You're a more resiliant person than I am, I fear.

you remind me of Christmas 1975, my first Christmas in the snow.