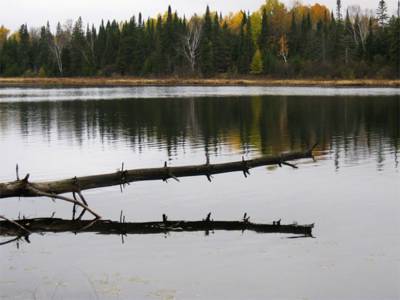 I don't want to neglect photos too much, for I know that, difficult as it may be to fathom, some people prefer my photos to my breathless prose. I searched neither long nor hard for this one. I simply opened the first file that I came to, and said: "This will do."

The photo of Robinson Lake, not far from Riverwood cottage, was taken a little over a month ago when autumn yet lingered. We will be heading up that way in another week and a half, and the landscape (and lakescapes?) will look totally different. There is something to be said for living in a genuine four-season climate, and just as soon as I think what it is, I'll let you know what it is.

Actually, we deliberately choose autumn and winter as our two main excursion-times into that area. Both seasons are bug-free, or comparativley so, and both are quite beautiful in their own ways. We are passionatley hoping for snow when we get there, but I think we may be disappointed.

Posted by Anvilcloud at 1:00 pm