Rambling in the Cold

To make one of my most thoughtful and original statements yet: time flies. The first week of our long winter getaway concludes today. Thinking that there is only so much one can do with snowscapes, I have taken to leaving my camera in the cottage when we have set out on our walks over the past two days. The photos that I include here were taken with Sue's tiny Canon Elph — the one that fits into her mitt. No family should be without one. I would give up my Digital Rebel first, although I hasten to assure you that I have no desire to part with it. Don't look for my camera to appear on eBay anytime soon.

Now that our legs are becoming more accustomed to the required, high-stepping snowshoe gait, we have taken to breaking some new trails over the past few days. By breaking new trails I refer to showshoeing over deep, virgin, untrod snow and not hacking out trees to cut brand new paths through the woods. As I may have said more than once recently, breaking new snow trails is rigorous enough on its own.

However, even when we are willing to break new snowshoe trails, we can't always succeed; sometimes, the brush is too thick. In the following photo, there is an old road on the property that is inexorably being reclaimed by the forest. We thought we could follow this old route yesterday, but the density of the young, sprouting pines (that I think you can see) prevented us. Immature, ground-hugging saplings like these can be more difficult to penetrate than a mature forest. In this case, at least, we found it much easier to find clear access among the relatively wide-spread trunks of the old trees on each side of the old roadbed. 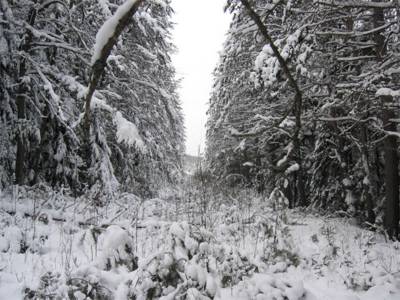 Today, with all proper deference to Martin of Inuvik, who chided wimpy southerners such as I for complaining about the cold, it is rather nippy here. (Don't worry, Martin, I do like the cold and am not complaining, just describing.) The temperatures for our afternoon walk hovered around –16C/3F and supposedly felt more like –25C/-13F with the wind chill factored in. Tonight's forecast: -28C/-18F, or –39C/-38F wind chill (not to worry, for we'll be huddled inside). It was cold enough this afternoon that my face was stinging within minutes. But I reasoned that as exertion warmed up my body, it might warm my uncovered face too — and it did! The exertion of snowshoeing actually enabled us to feel quite pleasant in the woods, as it also buffeted us from the wind that howled through the more open areas.

After plodding along the trail, Riverside Ramble, for awhile, we decided to forsake the beaten-track for the quasi path along the property line. I say quasi because the bush and undergrowth here are both thick and primarily uncleared. The kind proprietor has strung pink ribbons (some of which you may discern in the photo, particularly in its larger version) along the property line. The ribbons exist primarily for the benefit of hunters whom he allows to use his land for their sport. They know that they are permitted to hunt on this side of the ribbons but not on the other side.

I don't hunt and never will; I don't like hunting and never will; I can grudgingly accept it by those who eat their prey, but I want to picture them kneeling over the animal, breathing a prayer of thanks to both god and the prey. I try not to picture them standing on the animal in a half-drunk, swaggering pose. If you are shrewd, you may have deduced from this, that I cheer not for the hounds but for the fox.

Setting my feeling about hunting aside for the nonce, the reconnoitre along the property-line — through it's snow, under its low-hanging branches, over its logs, up and down its slopes, and through its brush — was sufficiently strenuous to keep us quite warm against the cold of the day.

The following photo shows a section of our walk. This section was probably more path-like than others, and if you squint, you may see the pink ribbons. You may see them even better if you click to the large version of the photo. 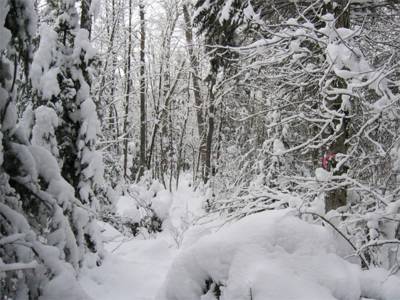 Dad those pics are great!!!!

Great pictures and that is an amazing amount of snow. I enjoyed viewing them. I can only dream about having such beautiful wintry days. I would love to take a trip up north and try my camping skills in a wintry environment. Take care Anvil Cloud and I hope this finds you well.

I love to look at it but don't enjoy being in it. Better you than me. The pictures are beautiful.