Living in a Christmas Card

We have arrived! We will spend much of the next six weeks at the old country farmhouse depicted the following photo. I took the photo at dusk yesterday, from the gate at the road. Don't you find it both quintessentially Canadian and quintessentially Christmassy? In your imagination, isn't this what a rural, Canadian Christmas should look like: a little, old farmhouse with both it and the trees blanketed in freshly fallen snow? 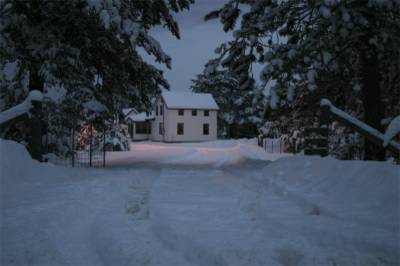 Several months ago, I conceived the idea to spend Christmas in the country, here at the cottage that we call Riverwood. It seemed like a fine idea at the time, and it does now too, but I was feeling rather dubious about the enterprise several short days ago.

We love it here. Riverwood is a great place in all seasons, but winter and autumn are our favourites. Happily, Riverwood is only two hours from Ottawa where the family will coalesce to spend Christmas. It will be much easier to drive two hours from here than to drive seven hours from home: especially because we will also be obtaining and transporting daughter #2 and her paraphenalia.

Recently, however, as I have already confessed, I began to doubt the venture. The whole process of getting ready, packing the car, and driving across province seems to develop into more of a monumental chore with each passing year, and I become more and more tempted to forego the exertion and to stay home. That's always the case though, isn't it? It's always easier to take the path (or in this case, the easy chair) of least resistance. Let me also add that my misgivings most certainly did not diminish as the pile of stuff-to-be-transported multiplied all over the house.

It takes a lot of effort to gather and pack all of the various goods and sundries required for a six-week hiatus. Boxes of food, bags of Christmas gifts, and suitcases full of clothes began to expand and mutate in every spare corner. How would it all fit in the car? Barely as it turns out: we had to fold the back seats down and pile both high and deep in order to squeeze it all in: to the point where I kept finding myself looking for bigger and bigger shoehorns. Mercifully, Harriet the Chariot (our Honda CRV) is much more capacious than our previous conveyance — Corey the Corolla — and, with the help of the shoehorns, the victory was ours.

Yesterday morning, with Harriet crammed to the brim, we began our five-hour trip. Miraculously, all went well; the roads were clear, and traffic was moderate, even along the normally frenetic highways of Toronto. After four hours, we found ourselves in Peterborough with only about an hour's drive ahead of us, and shortly after that, we turned the car north along a very rural, isolated road. For the next forty-five minutes or so, until we arrived here at the place that we call Riverwood, we saw very few vehicles but a plenteous helping of nature's beauty.

It is this final stretch that never fails to buoy my spirits. Lakes, trees, rock, and undulating topography always combine to render the drive most enjoyable and even therapeutic. It's always an uplifting section of road and country, but it was even better than usual yesterday, for there was snow: plenty of snow. There was not only snow on the ground, always pleasing enough in its own right, but the trees were most gloriously snow-laden for the whole stretch, and all of the way to the Riverwood gate and down the lane to the old farmhouse (to which both pictures attest). I have never experienced anything quite the like: Christmas-card settings around every bend in the road as the miles stretched on and on.

After unloading Harriet, we eagerly ventured out for a short walk: a very short walk because darkness was fast descending. The light was fading so quickly that I was forced to shoot at a very high film speed (800 ISO), a relatively low shutter speed (1/30), and a wide-open aperture. Despite the imperfect and waning light, I felt compelled to take pictures, for the magic might not have lingered overnight. I have observed in the past that trees tend to shed their snowy burdens with great alacrity (although the magic yet lingers this morning). Sometimes you shoot when you can and not when the conditions are perfect. Besides, I felt the need to capture that moment as best I could, imperfect photos or not. 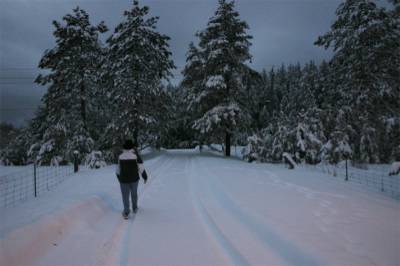 All in all, I should never have doubted myself for suggesting this trip at this time. It was a good idea to come here early and to get settled before Christmas, and never could we have picked a better day for the journey; for, as beautiful as it usually is here, I have never before beheld it quite as picturesquely resplendent as I did yesterday.

Now, if you'll excuse me, I am drawn to listen to a little seasonal music. Hot apple cider anyone?

You old cynic, you!! How do you take all that time out at Christmas? You must be rich!!

Far from rich but retired. :) I have the wealth of time, and I appreciate it.

I'll have that cider, now.

Wow, you'r bringing back memories. I lived in Ottawa when I was a teenager and camped in this area. I now live in Western Canada.

Funny, they can cottages "cabins" here. My parents retired and built a house overlooking Shuswap Lake in BC. Even though it is a full blown house, people often refer to it as a "cabin" based merely on the location.

We also don't usually see that amount of snow here, unless we go to the mountains. Don't get me wrong. I'm not complaining. I'm very happy that my shovel is in the garage where it belongs and quite content to look at your photographs.

A favourite quote by Bob Dylan: "A man is a success if he gets up in the morning and goes to bed at night and in between does what he wants to do." Sounds like you've achieved that...and then some. That's one fine homestead you have there.