I am picking up threads from other posts today.

I have talked much about winter although perhaps more often on FB or by making comments on others' blogs. In summary, it was a long and cold winter. But it's over, for on the weekend our temperature climbed to above 10°C/50°F for the first time since November 07 2019. That's 150 consecutive days below 10, which ties us for the 5th longest period. Strangely enough, we actually rose to double digits earlier than the other years (see table below), the latest date being April 24 in 1940. But we entered the single digits earlier than any other year except 1968. 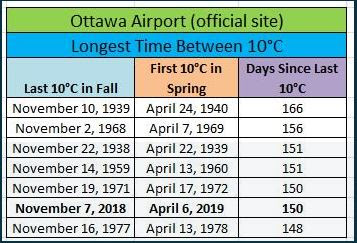 It has been a pleasure to open the windows, at least sometimes, in both the house and in the car. For the first time in a long while, we took coffee to the park. While there was still too much muck and even a little remaining snow cover to make us want to stroll around, it was still a treat to sit and enjoy looking at the river.

Having just written that, I see that we have an overnight freezing rain warning. But it's just a glitch, folks. Honestly, just a glitch.

(Edit: I have since seen more information about even longer winters back in the 1800s, which apparently rank this one at about 15th in length.)

You just never know who is going to read your blog. When I recently posted about last months reading, one of the authors that I mentioned caught it and sent me an email.

Thanks for reading PLAYED TO DEATH and mentioning it on your blog! If you'd like to read the second and third books in the Drayco series . . .

I hope you have a great year with your reading goals! I'm a little jealous, because you are way ahead of me right now.

Then, after mentioning introversion, I saw a this link directing me to 4 TED Talks on the subject.

I was already familiar with the first two talks. I first came across Brian Little (second talk listed) back in 2007 via a snippet on TV NEWS, and I posted about it back then. I was intrigued enough to follow up by purchasing a book by the other introvert interviewed in that segment: The Introvert Advantage, by Marti Olsen Laney, and I reported on it here.

Later, I saw Susan Cain probably via the same TED Talk that is listed first on the page. I also purchased her book, Quiet: The Power of Introverts in a World That Can't Stop Talking. Oddly enough, I don't seem to have blogged about it even though this introversion topic has appeared somewhat frequently on my blog, as witnessed by this search link.

I have just watched the third talk about activism and the introvert by Sarah Corbett. She begins the talk by recalling the time that she sought a peaceful withdrawal at a busy concert in a stinky outdoor toilet. She then proceeds to outline how introverts can be drawn into the world of activism in a quiet sort of way. Her understated style was at least partly responsible for helping to persuade Marks and Spencer to offer their employees fairer wages.

The fourth video on the page is not about introversion per se but an example of an introvert: Linus Torvalds, whose Linux software runs the internet and has changed the world. Basically he works by himself in a quiet corner of his house although he has also found ways to interact with scads of people — in his own quiet way, of course.

Being able to open the windows is a big step into spring! We had the bedroom window open one night, in March when it was 3 degrees overnight. We were a bit too eager!

So ...a bit of critique...editor that I yam. Your first mention of the long winter says Nov. 2019. You probably don't want to bring it down on this year, and meant 2018. Thanks and so glad that you got outdoors on a warm day!

We love having the doors open when possible and today is very much possible. However, it also means that work needs being done in the garden and we none of us like doing that! Ah well, it beats rain any day!

15th? I've seen pictures from those longer winters with the snow piled mountain high. Introverts? You?

It's warming up here to and we are overjoyed.

I have been told I am an introvert and I do get sick of being around people too much...although I love people, but in small and irregular doses. I did read that book, but now I have to listen to the Ted Talks.

I'm still wearing a toque, but that's more because of the shaved head and wanting to stave off any possible colds.

Yes, windows open are good.
We escaped with just rain today. Happy dance.
Authors are always happy when we review their books.