Last Night and this Morning

Last evening I went to the park to attempt to get a photo or two. My intent was to get some trees while the leaves were still light and feathery. I was hoping for some nice light on the trees, but if wishes were horses then beggars would ride.

This park can be frustrating for me. It's a nice park, but I find it difficult to find nice compositions there.

After some aimless wandering about, I took this photo of a sunset beyond a flooded tree. That pond usually isn't there although it often appears in springtime.

I waited until the sun was low enough that it didn't give me flares, and the cloud cover helped. 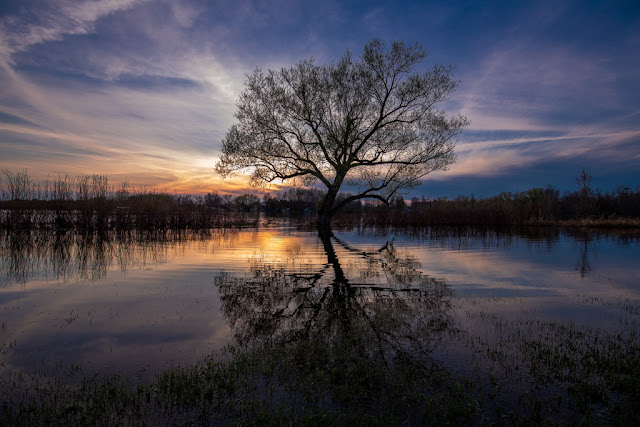 As for this morning, it was overcast enough that I ambled over to the neighbours garden to try to snap their Heather plant. But it was windy, and I didn't do well, so I deleted them all. Also, with a bad back and all, getting low is highly problematic. Sigh.

After coming back inside, it was around 6:20 when Sue saw a full rainbow from the bedroom window. What neither of us noticed at the time was that there was a faint double rainbow. I only saw that in the photo, believe it or not.

Since rainbows disappear quickly, I just poked my head out the back door and fired away rather than try to drive around and look for a better shot. But I did take the time to put on my wide angle lens (which is also what I used for the tree shot above). It's not every rainbow that is a complete arc with a double to boot.

Then I shot from the upstairs window. By this time it was raining, so I picked up the drops on the window. I didn't open the window because if the way that it opens, I would have been obstructed. 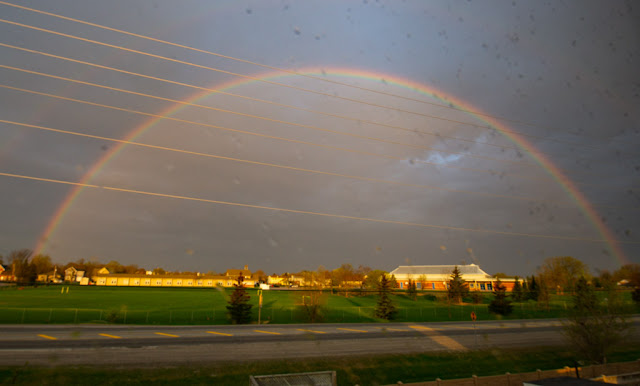 I was pleased to get the shot as well as I did after the disappointment with the earlier flower shots.
Posted by Anvilcloud at 8:56 am

These all are winners! The rainbow is a tribute to not getting under the wires. The top one is simply classic.

The Tree is more than successful, but I love the bottom rainbow with the sunlit wires running through it.

The top photo is a keeper for sure!

You should be very pleased with these. They are all stunners. You could use a software to erase the wires if you were patient. They still are great shots!!

Well done! These are terrific photos!

All great shots but I love the tree one the best! Just beautiful!

The tree is dancing.
And I like the rainbow through the wires, do not get rid of the wires.

These are amazing! You have done well. We had another trip into the Ottawa hospital yesterday. I am so tired. The good news is we can have the shots done in Perth in the winter. whew.