I probably don't tell this story every year, but I am pretty sure that I have told it in many years. So, what's one more year, eh?

Every year we get a nice crop of myosotis both in the front and back yard. They are a reminder of Dad and how he transplanted them from his garden to ours back in 1983. For 22 years in that house they reseeded themselves and brought us joy. Dad died in 1999, but his forget-me-nots came back year after year.

When we moved 7 hours away from that house across province to the Ottawa area, we brought some plants with us. Actually, I think they were most likely seeds and not plants, but I'm a little fuzzy on that point.

Thirteen year after the move and 25 years after the initial planting we still get a nice spring showing. Some years I take pictures, probably most years.

I took this one out front the other morning, hand-held with my macro lens. I thought that liked it at the time, and I actually did, but I don't anymore. It's not well enough focused, and the surrounding green is a little too garish for my taste.

They say that you should always walk away from a photo once you are done with editing. I guess I should have done it in this case, but I will present it anyway. Let's be honest after all; I have more failures that successes. 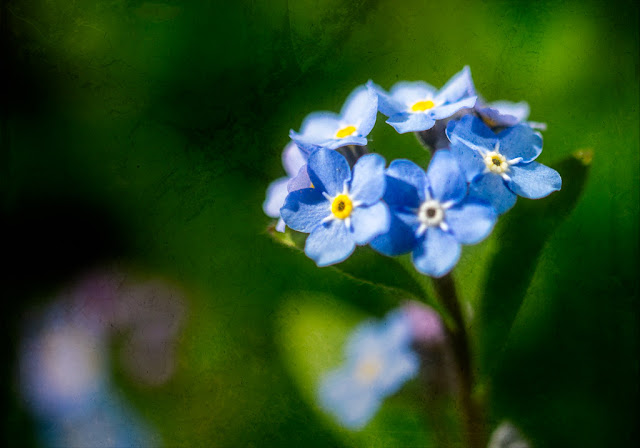 The dad-blasted (sorry Dad) wind picked up again, but I headed to the more protected backyard to try a few more shots. For one thing, I had promised to show my tripod setup for these low flowers.

I can spread the legs and move the centre post so that I can get very low shots. Here's what it looked like in this case. 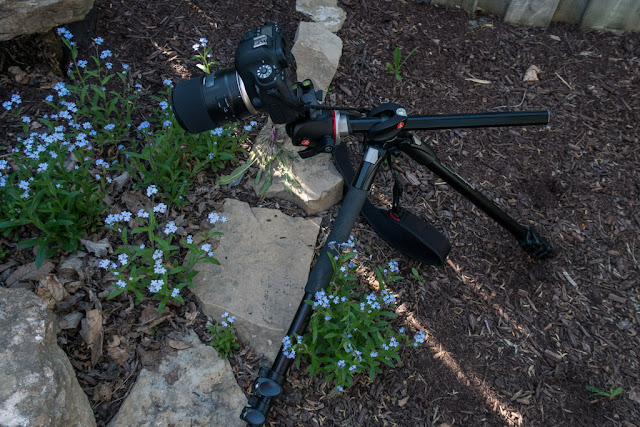 I got a little confused and tried to take several different shots, each with a different focal point, and then stitch them together in post. I didn't do as well as I would have liked. I needed more shots to get the overall focus better. As you can see there was also some wind and/or camera movement, but it's a somewhat interesting result anyway. Maybe I will try again. 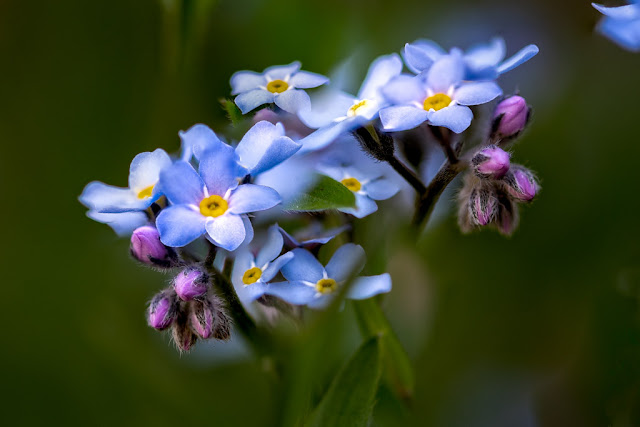 Then, I took it off the tripod, set the camera on auto focus and fired down into a cluster. Once again, it's not perfect, but I like it best of the three. There's something to be said, at least sometimes, for not being locked down on a tripod. 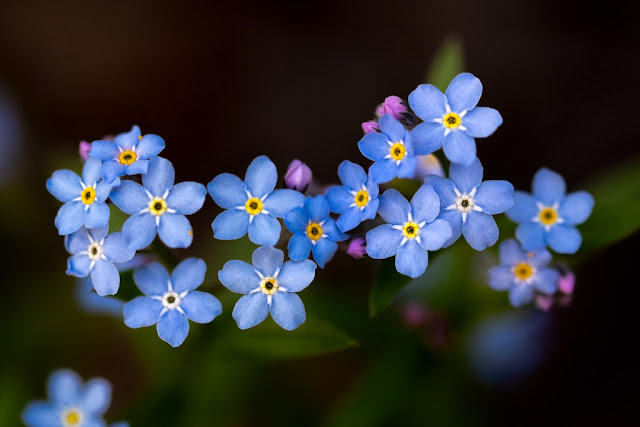 We have forget me nots here, they grow wild in England but are also used as a garden plant. I am VERY familiar with them but I never did a close up picture or looked closely at the blooms. So I really liked your pictures. Sometimes there is such interesting stuff right under your nose.

They all look perfect to me AC.

I;m sure they were relieved when you left. They have lives, too, you know!
The last shot is the best.

I love the shot of the tri-pod. It's like a little dog peering inquisitively into the garden!

But the last flower photo is my favourite.

John, I think they are quite lovely. My hubby has a wonderful camera and setup, but I just use my IPhone!

I just love the last shot! I've always loved these flowers but never have managed to get a really good shot. You are doing some beautiful work with your macro lens!

To most people, John, the photos here would be great, but then I know you are much mode critical and exacting in what you expect. These beautiful blooms have a soecial meaning in your garden and it was nice hearing the background story.

I like the one above the bottom one. The new blossoms are so furry and so in focus. REally like it.

Wow, these are lovely. That tripod is interesting with the gambled handle. Mine is a traditional ball and it is wearing away!!

Neat stuff.
I probably tell you this each year, but my mom loved her forget-me-don'ts!
I plant seeds for her. They aren't blooming yet, though.