... not quite silent, but I'll stick with this re-usable title.

Perhaps you recall this photo from almost two months ago? I had just laid some rocks around an area that was to become a garden. 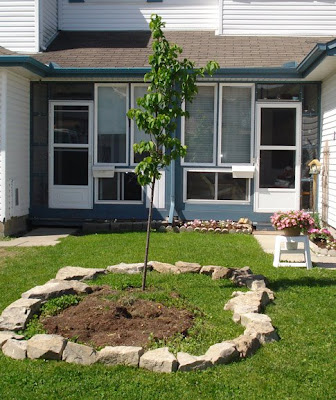 Well, this is how it looks now. The petunias have filled in beautifully, hiding the perennials that are just getting a start on life. Believe it or not, there are eighteen perennials in there. Next year, they should dominate with some support from annuals. While I don't think it can look any better, I find perennials more interesting as different plants come into and out of bloom, making the garden take on different appearances as the season unfolds. 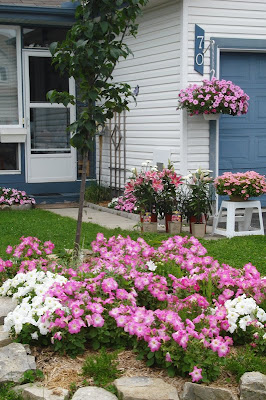 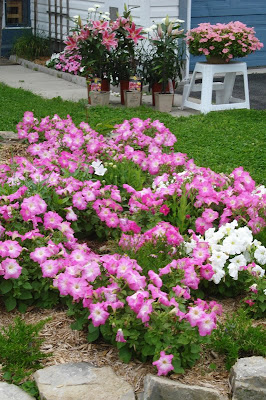 Perhaps you noticed the plants that are still in pots in the background? There are three Shasta Daisies and three Lilies. I really thought I was done with planting for this year, but when the local garden centre advertised two gallon pots on sale for half price, I had to take a look — and found Shasta Daisies that look like Chrysanthemums. There were only three left, so I grabbed them while the grabbing was good.

Then I wandered around the place some more and found gorgeous lilies, also on sale. While they're not called Stargazers, they look pretty darn similar, so I bought three of those as well. At worse, they make a wonderful showing for this year; at best, I'll find or make a place to plant them, and they'll bless us for years to come. The lilies are blooming now and look and smell gorgeous. 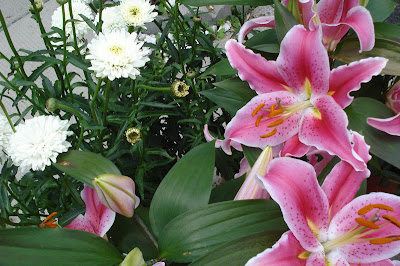 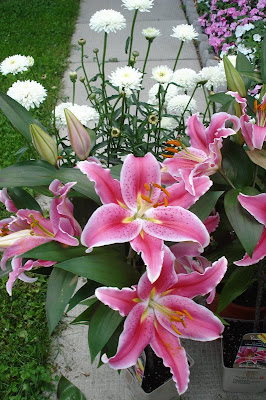 I wasn't too sure about it when I first saw the photos, but I must admit: you are better at it than I: it looks lovely

The garden looks great and your photos are amazing.

You did a great job. Time to do things is always the best friend a garden ever had. Did the same thing with the reduced flowers at the nursery. I love the petunias.
QMM

The transformation is lovely. I hope the young men next door are impressed by the entrance you have created.

Oh lovely lovely!!!! Sometimes you do get rewarded for all your hard work!