It's not a bad day weather-wise — temporarily at least. Internally, I am less than 100%. Don't you just hate picking up a summer bug? What a waste!

Although it's neither Foto Friday nor Silent Sunday, I have a plethora of photos to share. Last week, while Daddy convalesced, we spent a lot of time supervising The Bonnie Wee One, even more than usual. So ... on with the show!

We managed to find enough of a break in the clouds for a little pool time. While the weather still wasn't ideal for waterplay, it wasn't as cold as our first venture the week before. She was much less nervous this time around and was so anxious to get in that she didn't allow Buppa ease-in-gently time. 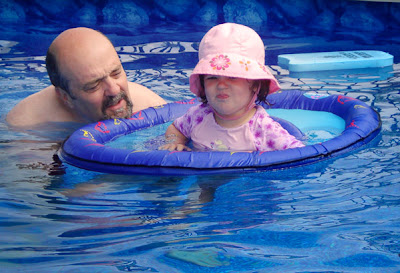 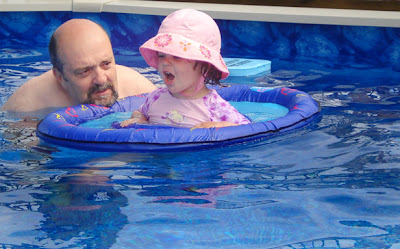 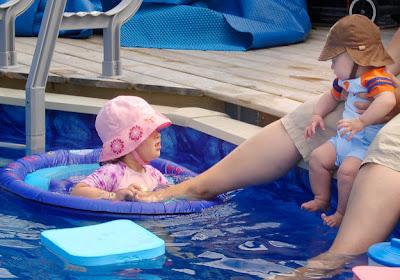 On Saturday morning after her fourth night of sleepovers, I was grilling chicken in my pajamas (me, not the chicken) at breakfast time (you read that right). The grass, mostly clover actually, was wet and high (it's hard to find a long enough dry spell to cut it), but Nikki Dee went out and had a blast. Mostly, she was attracted to the fresh, wet, black earth that I had just laid around our new, little sapling (or maybe it's a big sapling ... or little tree). That resulted in her first entire wardrobe change of the day — the day which had hardly begun. 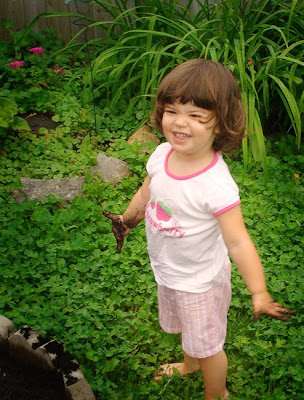 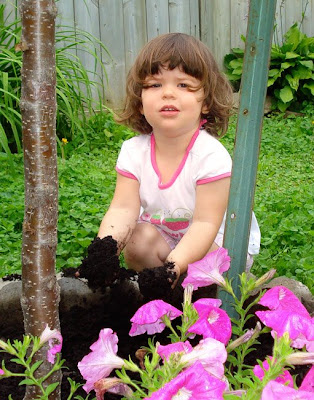 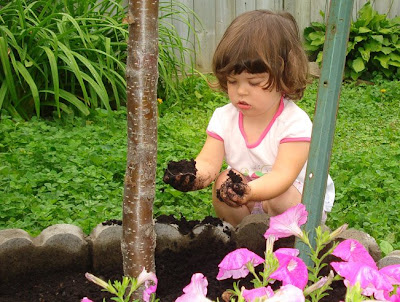 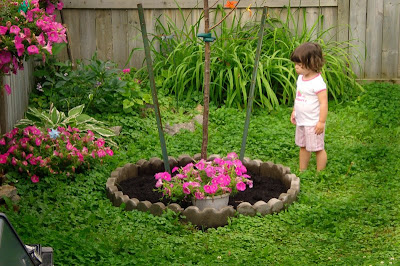 Before proceeding, let me reassure you that even Canadians do not normally grill chicken at breakfast time. In my defense, it wasn't for breakfast. Rather it was a case of "We've had this chicken thawed in the fridge for several days now and we need to cook it or toss it." So, I did ... cook it.

Moving right along ... here is just one more Nikki Dee photo (I'm weary, so that's all you get no matter how much you clamour for more). It's from one of our little walks. We like to tire her out in the vain hope that she will be a trifle less rambunctious. Hah! Fat chance! She'll probably grow up to claim child abuse over the restraint that we use, but, meanwhile, it makes life much easier. 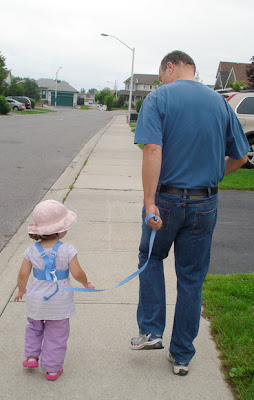 Oh phooey! One more of her before moving on. She has taken to frequent porting of both an apple and orange. It began with one orange in her grocery store visits. Then, she added an apple, and then she began carrying the two in the house and around the neighbourhood. We attribute her more bizarre proclivities to the French side of the family. Also of note: she says "Ornage." All the letters are there: just in different order. 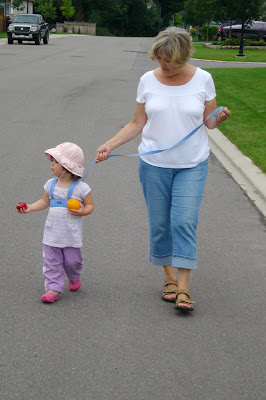 Come Sunday, the Amma and the Buppa were ready for a rest. We headed up to the local nursery where the daylillies were in full bloom. In an odd turn of events, the sun came out, and we were actually too darn hot out there in the field. So, we headed to the shade garden where I took this photo of my Cuppa. 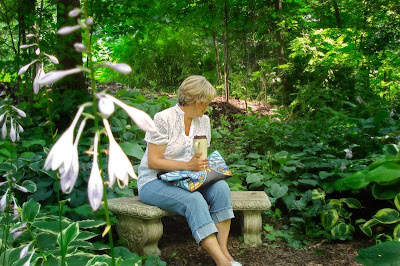 That's all I've got folks. I'm knackered. have a good day.
Posted by Anvilcloud at 10:00 am

Hah - grandparents' disease has struck again.
Hope you are better soon.
Keep the photos coming; she is one adorable kid.

I've eaten pizza for breakfast and I sometimes make myself English Breakfast for dinner! Nothing wrong with that...
Great photos as usual

I hope you are feeling better soon ~ and thank goodness for granparents is all i can say!
Your pictures are lovely ~ the baby is getting big!

We've had fried chicken for breakfast so don't think twice about it!
Precious photos!!hughugs

What a splendid way to get knackered.

Knackered or not, you take great photos---I can almost smell that moist black earth.

Thanks for your kind words for my Rachel. All I could think of for two days was my beautiful 42 year old daughter when she was 3 or 4.
QMM

That is quite the thing-a-ma-jig you have for her to get into while enjoying water play. I will have to look into something like that X2. :-) Also liking the little harness thingy. Wonderful photos of a most precious little girl.