I seem to be very busy these days. We do something, and then I process the many photos that we take, and life goes speeding by. The blog suffers, and I really don't want to keep posting hundreds of Smudge photos. However, I do have this photo sitting in draft from sometime last week, so somewhat reluctantly, I'll go ahead with it. I hate the view of me, looking like a bulldog cross, but I'll post it anyway. 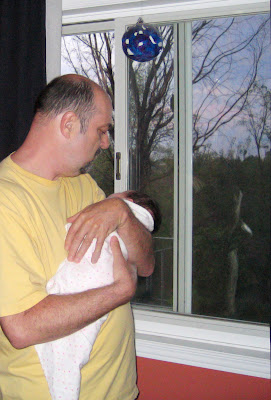 While grandma is by far and away the champion smudge-calmer-downer, I have some luck every now and then when she's (the kid, not grandma) really distraught. Sometimes, my deep bass voice shifts her attention from her troubles, and she pauses to listen and be soothed. Typically with babies, I would try not to use the deep voice, but with this kid it actually seems to help — sometimes — occasionally — rarely.

I'm also by the window. The light really attracts her sometimes, but she is getting better at focusing — getting closer to it anyway. Yesterday, she actually moved her head to track Cuppa as she moved. That was a first.

In other news, while the kids celebrated Mothers (I hate the apostrophe) Day with Cuppa yesterday, Saturday was my day to take the grand old lady out. We headed toward Carp and Fitzroy Harbour for the Red Trillium Studio Tour. It was a good tour and had something that I hadn't experienced before on such tours: some vocal artists. It was a very pleasant change, actually: something for everybody.

We found Kate and Hollis in the backyard of one of the garden stops and found them to be delightful. I couldn't resist buying their CD. They're country-ish (this song particularly) but different from the standard fare. Here's my YouTube capture.

I don't mind the apostrophe; I just can't figure out where to put it.

One mother or a bunch?

I'm tagging you with a food tag, just to get you out of the house so you can put down that baby and take grandma out.

I think it's a very good photo.

I had always just omitted using an apostrophe for Mother's Day. But started using it this year, for some strange reason. I'll have to go back and look at the photos of Smudge!

Hahahahah... a bulldog cross! I am knee slapping now - TEEhee!

Awwww. I'm glad you posted it. Just amazing how much we love these wee ones.

The music is nice.