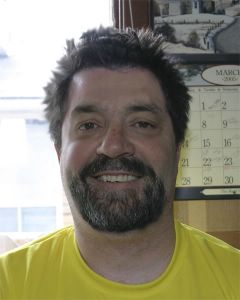 My face in Eric's body

Back when I was going on ad nauseam about showers, baths, and towels, I mentioned that my son-in-law looked like Pumpkinhead in the morning. How silly of me! Nobody knows about Pumpkinhead (or is it Punkinhead) any more.

At one time, at least in local Canadian Christmas mythology, he was one of Santa's helpers who was cursed with a tremendously unruly mop of hair. I remember feeling very badly for poor, poor Pumpkinhead. Now, no one knows who he is or was — even Google! 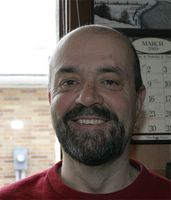 So it was that I was moved to take a picture of the boy this morning before he showered and departed for the long drive home. Then he took one of me, and THEN I morphed the two — put my face into his head. Well, I look at it and can't even see me in it although I know it is. How weird is that?

Unfortunately, this is what I look like now. I must tell you that it grieves me to look like this. I once had a full head of hair, and not to be too braggadocios about it, wasn't exactly the homeliest boy in the class. Just look at me now. I never thought that I would look like this. Sigh.

Posted by Anvilcloud at 4:10 pm

I am laughing my ass off!

I'm so glad you did that.

This is well done! How about the boy's face in your head? I'd love to see that!!

WOW! That is truly remarkable. I’ve done my fair share of graphics work, but I have never been able to accomplish anything to this degree of morphing mastery!

What IS your secret?

Thanks for sharing this digitized work of art! I’m sure D1 and Eric will enjoy this for some time to come!

Phfttt!
All I could think about when I saw that is that people PAY to have their hair look like that around here.
Nice morphing.....

And what, might I ask, is wrong with the way you look? Absolutely nothing as far as I can tell. Cuppa has a hunky hubby -- something I am sure she is well aware of. ;)

Hilarious!
Very well done by the way! How did you do it exactly? Photoshop? You can't even see any lines! If I didn't know any better, I'd say there are four different people! Or do you both just have evil twin brothers?

Oh, and perhaps you should crop that one image ... ;) Kidding!

What a fun post! Like everyone said, you did an excellent job on the photos. Oh, and by the way--I think you look fine now, too. Just smile real big and be kind to yourself and others--and that will be what people notice the most. (At least that's what I tell myself when I look in the mirror...smile...) ... Debra

That is hilarious! Great morphed photo! I know quite a few 20-somethings who purposefully wear their hair that way, actually. I like what you said about Punkinhead, because I had never heard of the Canadian story about him (not her, I assume-- sounds kinda masculine somehow!)... but that is what I occasionally call my beagle, as a nickname! I hear ya about grieving physical losses as years pass... women, I think, grieve more of what used to be "perky" and now isn't, as well as the number of wrinkles that accumulate over the years... men don't seem as concerned about those things, but the hair thing instead. From my P.O.V. out here in Blogworld, your bright smile is the most outstanding thing about your face, not the number of hairs on your head.

I faced a similar reality, when it dawned on me that what wasn't falling out was turning grey. I opted to teach it a lesson by scalping myself. Looking on the bright side of things, you have a goodly-shaped noggin. If you were a pinhead, it would be a lot less fun being bald.

Apparently, the internet is forever. Almost 8 years later, someone researching Punkinhead found this posts and linked me to this article, which has the full history.