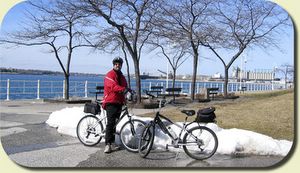 For a while I thought that March was going to pass us by without offering us the opportunity to get out on the bikes. However, the winter-spring interlude season gave us just enough of a break to let us get out for a ride on Tuesday afternoon. The sun came out; temperatures climbed to a balmy 3°C/37°F, and the winds slowed down to about 20kph/12mph. There are still spots of snow accumulation visible behind my pose in the photo to your upper left.

Cuppa's picture (below-right) shows the boundary line between the ice and the water in the bay. For whatever reason, many seagulls and ducks chose to sit along the ice edge, but they're not terribly visible in the photo. 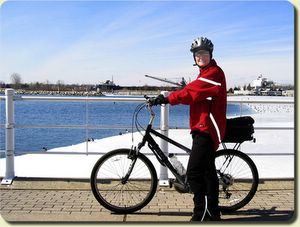 There were a few other bikers (when I say bikers, I mean cyclists) out; we greeted one another with broad smiles and silly words such as: "There's another silly biker." Everyone was in high spirits and good humour.

I understand that my more southerly guests will think the cavortings of these Crazy Canucks rather absurd, but the truth is that we as warm as toast in the outfits that you see. In fact, the problem with many winter endeavours is staying cool enough under the layers.

Nice that you could get out, although NOT very warm! We have people cycling to work almost year 'round. How do they keep from sliding on snow and ice? And our hills....I think they're crazy!

It's funny, not many people over here wear those protective hats. I, for one, don't even own one! Hubby neither. I think only the 'real' bikers wear them.

Your snow is melting. Wow, 3 degrees, too chilly for me! Over here we're suddenly having this spring weather the last couple of days. Clear skies, lots of warm-ish sun and temperatures around 15C!

How exciting. Just last night my husband and I went shopping for bicycles (although more for him to bike to the train station this summer to illeviate this little mom to be's taxi cab responsibilities).

You and Cuppa look absolutely adorable! Oh...the nice weather is so close...not too much longer now.

37 F, balmy?! I think not. Guess it is just one of those latitude attitude things.

I am very glad that you were able to get out and enjoy a bike ride.

It is warm and rainy here today -- chance of thunderstorms this afternoon. I am hopeful that the American toads will be singing tonight. They have been uncharacteristically quiet thus far this year.