Well, now that my email problems are behind me, shall we get on with things?

On Friday evening, Jonathan was honoured to be the flag bearer at the Carleton Place Canadians hockey game. The Canadians are a Junior A team of older teenage fellows, mostly in the 17 to 19 years range. They are a very good team that has been to the Canadian Championships for three straight years, winning once — a most excellent achievement when you think of the amount of competition across the country.

Mom requested that I show up and take some pictures, so that's what I did.

JJ and his friend were first invited into the dressing room to meet the guys. In a small crowded room, I was able to get a picture with a few of the team. JJ is to the left of the little guys with his teammate to his right. 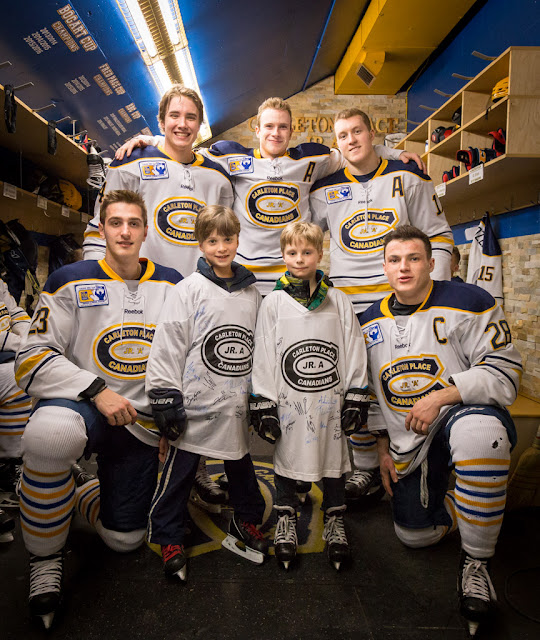 Danica was there, and they were happy to include her as well. 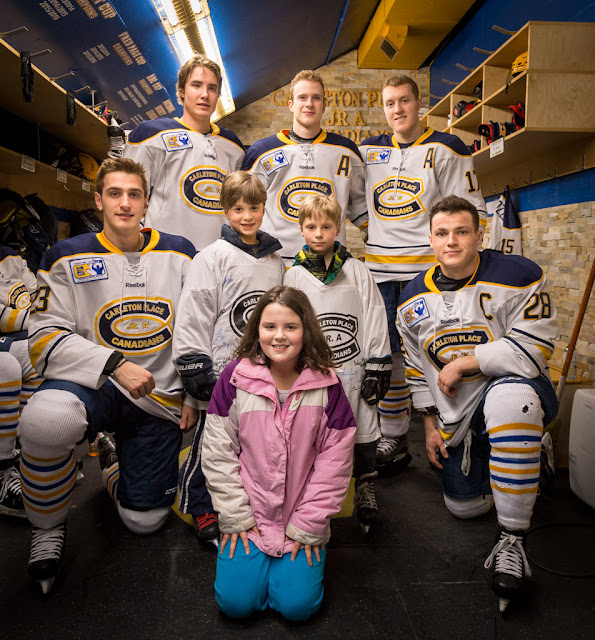 She even got one with the captain. I think she liked that. 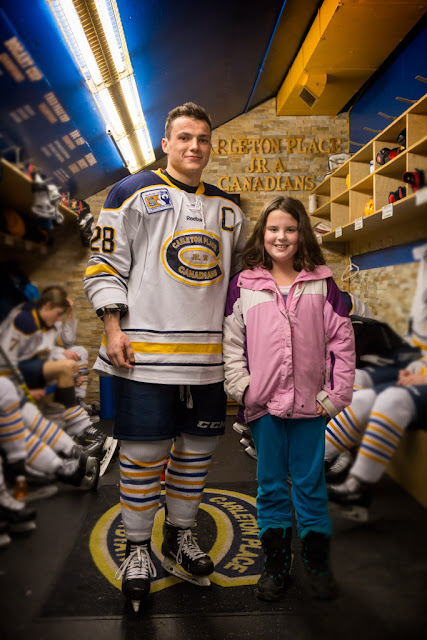 Then it was time for the flag-bearers to do their thing. First they got settled with the flags. 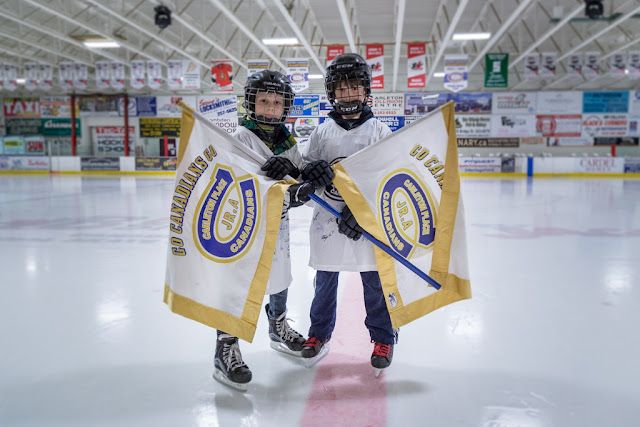 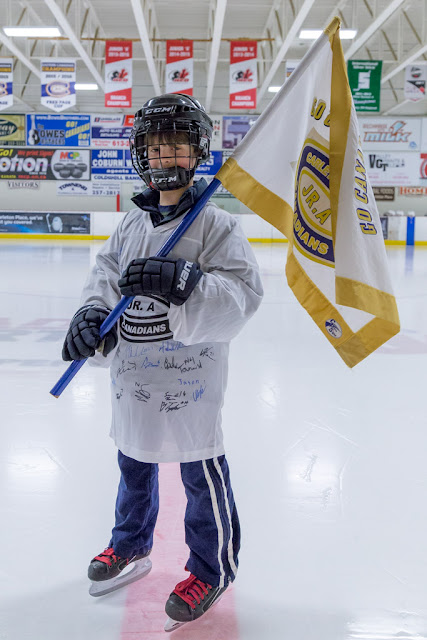 And then they skated and skated for about 10 minutes before the team came out. They must have been getting a wee bit weary by the end. 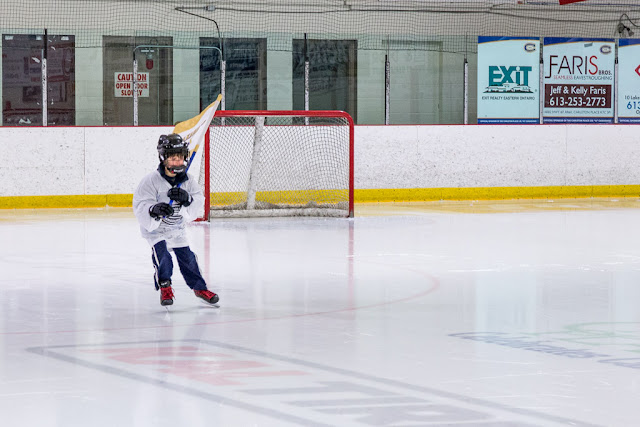 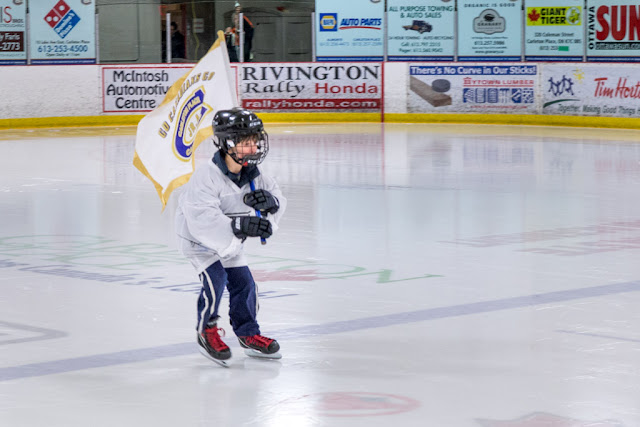 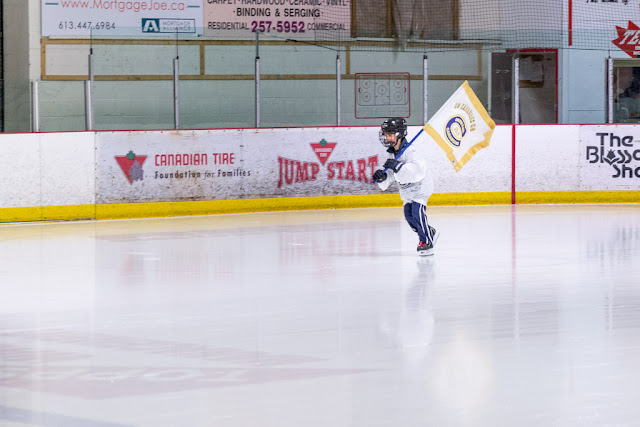 Then came the kicker for me. The team was having a special night, honouring a long-time, dedicated fan who had passed away, by each player donning the man's nametag — Hope, instead of his own.

So, would I go out onto the ice and take a photo? No, I wouldn't because of foot and age problems. I'm not exactly nimble, and I was porting some expensive gear.

Well, what if we walked out with you for support.

So, JJ's father gave me his arm and off we went. When the referee saw this, he skated over and offered me his arm. The man was as solid as a mighty oak, and the fact that he was wearing skates made the way smooth.

So here is the photo of the players lined up facing away from me with their name tags showing. This is the photo that the team wanted.

But I realized the problem. To get the whole team into the photo, the players became quite tiny and the name tags even tinier.

So, I zoomed in to a select few. Now, the name, 'Hope' is quite evident. 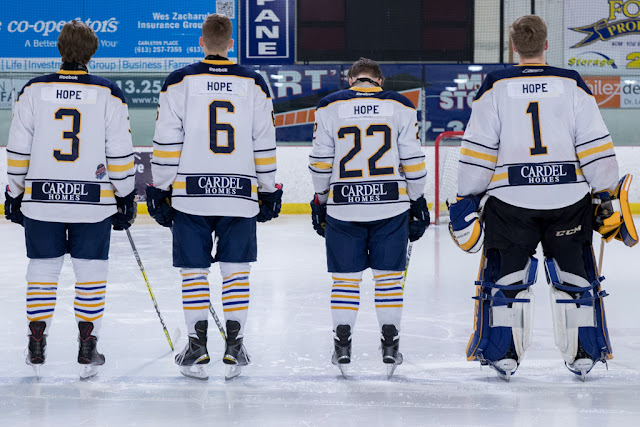 The referee escorted me back to the gate, and I took this photo of the little guys with the big guys during the anthem, JJ being the farthest of the two little guys. 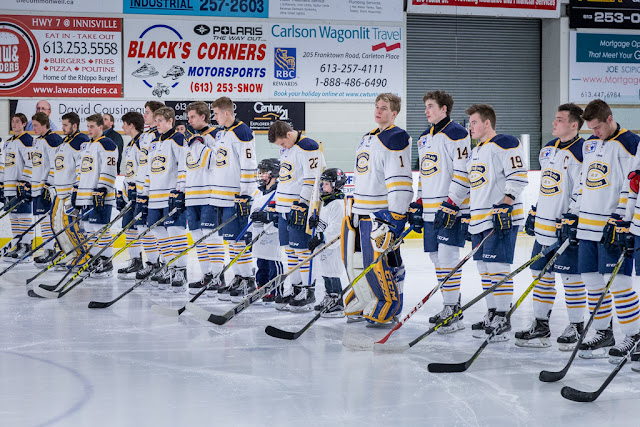 I was told that they would like to make a collage of the Hope photo with the man's photo included with the team's tribute. Now, I don't have the man's photo, but I have suggested that the following composition might work, with space available on the bottom right to insert Mr Hope's photo. 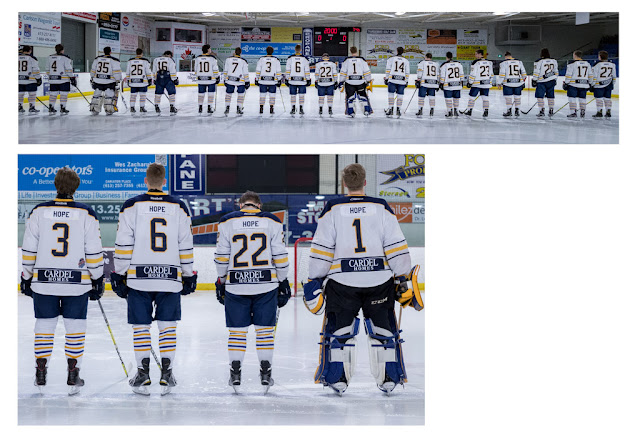 It was an interesting and memorable evening although I looked like a doddering, ancient man being helped on and off the ice. Oh well.

Doddering or not, you got on the ice and took a photo, well several photos! I say thumbs up to JJ and yourself!

Great job. You did it is the main thing. Well done. It must have been really exciting for JJ.

Beside a babbling brook... said...

And though you had to be *helped* on and off, hey, without you, they wouldn't have the great photos!!!!!

Thank you for coming over to my blog, and making a comment, after I introduced myself here... Re: your comment on my post.... I agree, all bloggers should blog, just as they want to.

But I wasn't asking that.

I was asking, what do readers prefer, when reading blogs?

Congratulations again, on your addition, to a great night.

An awesome night, especially for JJ, who's super cool pop got escorted on the ice to get some great photos. Not a doddering ancient man at all!!!!!!! Wicked good stuff :)

What an exciting night for everyone concerned.... JJ, his doddering ole grampy (hehehe), the rest of the family, the team, and of course the Hope family. Great pics too.
Oh my those young hockey players are really handsome. I should go to more hockey games!

WoW!!! what a wonderful experience, you got some great pictures!!! how nice they included danica!!!

Echoing previous comments here to say that this looked like a wonderful night for all, especially Jonathan and his friend. And, it was a nice team gesture to honor Mr. Hope too (assume his first name was not Bob?). And if being escorted on the ice made you feel safer, then why not accept the help cause I would have too.

that is so cool.. both kids look very happy and you got some great shots.

Aw!
My son-in-law is just back from a world tour. The kids are happy he is home!