Of Fire and Ice

We have friends, acquaintances really, who live by the lake. The lake is really just part of our Mississippi River but where it is quite wide before it reaches our town.

It's not easy to capture direct sunsets around here due to trees and angles, but it turns out that they look directly west into the setting sun.

We have a general invitation to drop by and take pictures but it has always slipped my mind. But Sue visited the other day and commented on the ice huts out on the lake, so, finally on Saturday, I remembered to make a point of visiting.

Fortuitously, we stumbled onto a rather wonderful sunset. The main probably was the bitter cold which caused me to kind of hurry my shots, but I still got a few that I liked.

This is our approach to the lake. I had already been down there but looked back to take this photo when we were heading back to the car to warm up before trying a few more shots. Our tracks are visible. 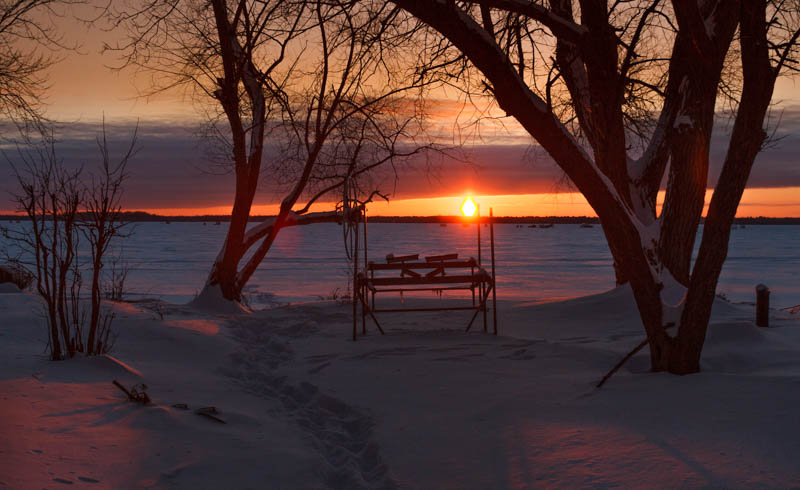 This looks like the same shot, but I shifted right just a bit and caught the rays on the snow a bit better, I think. I also didn't crop this one from the top as in the previous photo. A foot or so made quite a difference, and I like this one better because I can follow the path of the rays on the snow better. 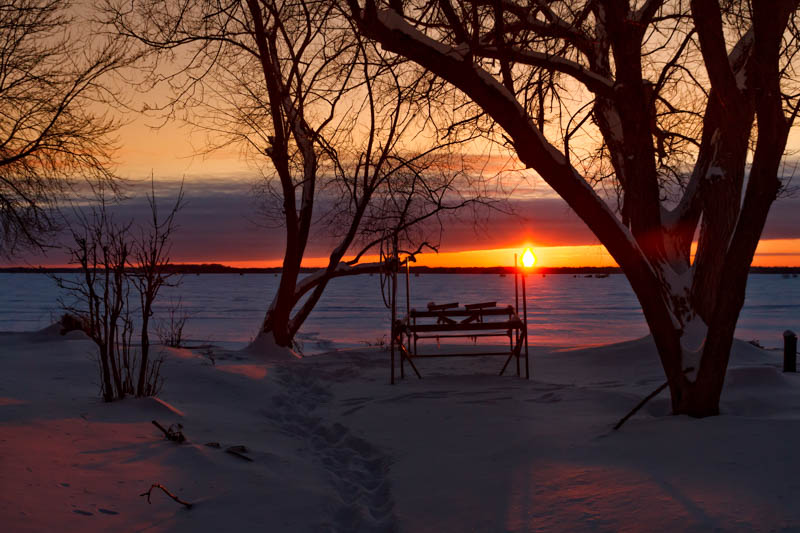 After warming up in the car because the bitter cold had turned my fingers into icicles, I headed back with the tripod and a longer lens. I needed the tripod by this point because the sun was really getting low. In fact, it had really set.

With the zoom, I was able to capture a few folk and huts on the ice — one hut being an actual trailer. It looks like they were either drilling new holes or examining old ones as I was taking the picture. 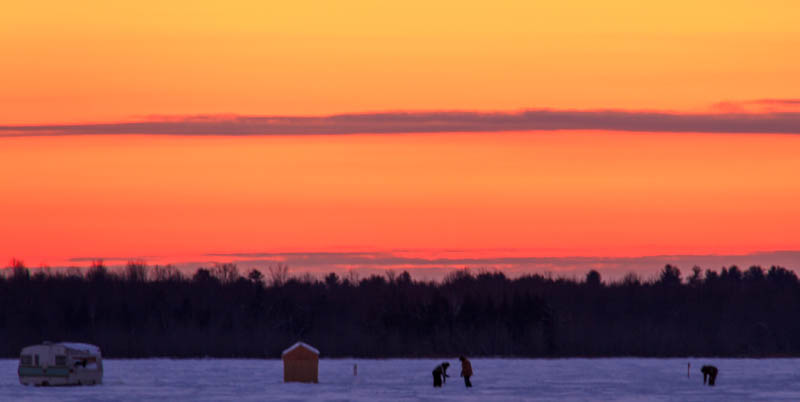 Finally, a two-shot panorama of one lonely ice hut off by itself. What a sky though — looks photoshopped, but it isn't; this is pretty much the way that it came out of the camera, given that there are usually a few processing tweaks when you shoot RAW images.

But we and my frozen digits were soon back into the car. Did I mention that it was cold?
Posted by Anvilcloud at 6:00 am

gosh, that color is wonderful! thanks for sharing the cold and hot!

I looked to see what your temperatures have been. Oh my goodness! I easily imagine myself sitting in the car, heat on high and watching the sunset from there. Beautiful pictures!

I haven't been out yet this year to take photos of the ice huts on Lake Simcoe. Thanks for reminding me. You chose a gorgeous time of day to take your photos. Sorry about the finger-numbing cold, though.

Lovely sunset photos, gorgeous colours in the sky. But with the low temperatures lately, I don't blame you a bit for getting back to your car ASAP!
And even colder tomorrow!

Worth the cold fingers. I sometimes take a chemical handwarmer.

Lovely photos.
I think the trees make it interesting. I used to hate that trees got in the way of my shooting the full moon, but after a while, I realized that they actually added some character. Otherwise you'd be looking at a ball in the sky.

Sunrises and sets are pretty, especially over water and I do get what you mean about the trees. However, I love the colours in your first two (well all of them), but as you said, you can follow the path of the rays on the snow - and I like that you can see your footsteps too.

I envy you your camera equipment. I've yet to purchase a tripod (probably get a monopod as it's less trouble to cart around) and I'm still using "automatic" setting on my camera.