Omissions, Discrepancies and Contradictions within the Crucifixion Narratives

Mothers hide your children as this is a follow-up post to my crucifixion piece. There was a little interlude of a Danica post between the two. This is a continuation of my amateurish analysis of the four gospel accounts: this one highlighting the differences.

Not all differences from one gospel to another are problematic for me even though I formerly believed in the inerrancy of scripture. I can even accept outright contradictions, for one can certainly believe that God is revealed through the bible without believing that every word is 'God-breathed'.

Following are three lists of what I see as omissions, discrepancies and contradictions within the four crucifixion narratives. Keep in mind that this is all from one layman's reading and not from a biblical scholar's perspective; therefore, there may be errors. I leave it up to the reader to determine whether there is any merit to this analysis.


The first of my three lists contains seemingly significant omissions from at least one gospel.

This next list contains discrepancies, some of which seem very difficult to reconcile although I know that some people manage it.

Finally, I seem to spot three seemingly irreconcilable contradictions although I am sure that apologists have managed the feat somehow. I begin with the most innocuous of the three points and end with what I consider to be the most profound contradiction.
As I have already stated, I don't feel that scripture must be seen to be inerrant for people to be Christians and to believe in God and Jesus. However, I do find it highly improbable that the doctrine of biblical inerrancy can be satisfactorily supported.


Edit: After readying the above for posting, I came across this graphic. I find it humorous. I hope you take it in that spirit, for I am not intending to be sacrilegious. 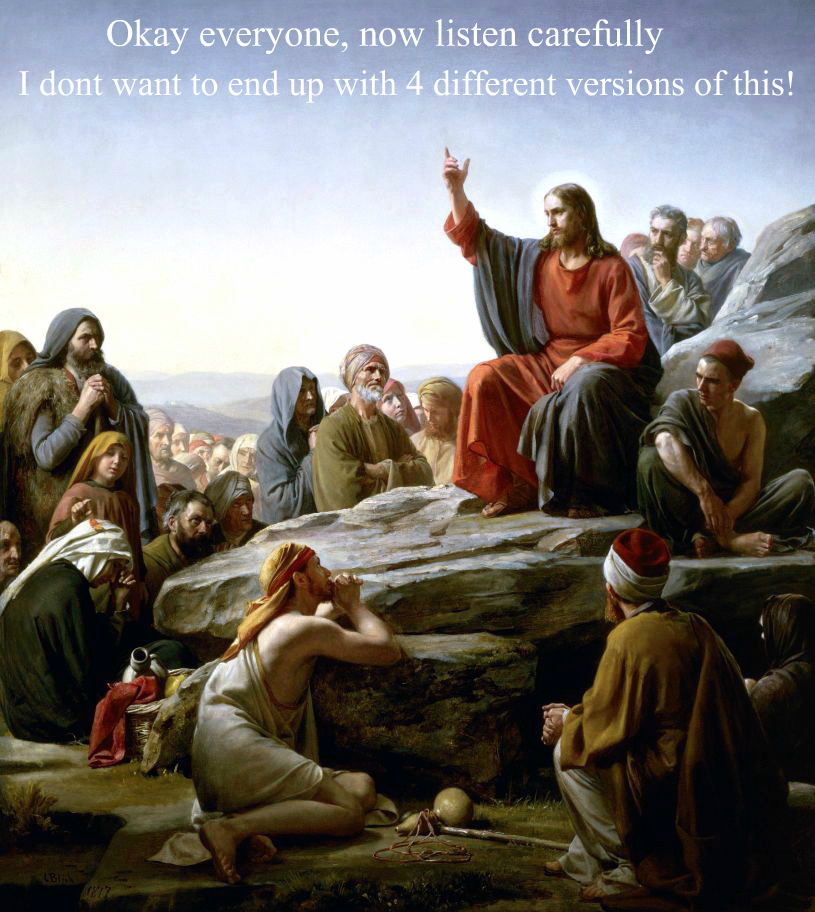 Posted by Anvilcloud at 7:07 am

Thank you for this. I haven't read the gospels on my own ever, so I am not as au fait with their contents as you now are. I do however agree with you, some of those discrepancies seem too big to be true, especially the earthquake one. If there would have been one, all would have written about it and it would most certainly been mentioned in other writings of the same era.

There was a fascinating programme on BBC TV recently, which looked at the earliest writings still in existence. It made it easy to see how discrepancies occurred, and no one version may be taken as 'gospel' - pardon the pun!

I have read both of your posts. As a lay person, and most definitely not a Bible scholar, I was fascinated with your findings. As a Christian (United Methodist) I just take each gospel for what it is. One mans accounting, whether fact or just his views of what happened. Thanks for your insights!
Have a good week.

i believe any time humans are involved, versions and variances emerge in about a minute. :)

To err is human.
To forgive is divine.
I believe the Bible has both....

Interesting post. My mom wrote and published an autobiography the year before she died. Her 5 children read it and we all felt there were inaccuracies. All of us had different perceptions, observations and memories of the same experiences. She emphasized some things we thought were insignificant. In discussing it with her we compared her writing to a gospel where different accounts are featured. And the gospels were written in a different time, culture and we read translated versions. There is a definite translation bias in the King James Bible.

The cock crowed three times..."you will three times disown me ." As one researcher stated, " Did Peter not hear the first crow?" Who knows...others say it crowed twice...
SO many variations...one just has to trust your own gut. When many different men write and rewrite there in itself is the problem.
Good post!!
hughugs

Having studied the synoptic gospels in one course, and John in another--here are some answers. Not explanations, mind. No need for that.
First, Ruth gives you part of the "key"--four writers, all of them writing around 70 AD or CE, whichever you prefer. So, at least 40 years had passed.
Second, the gospels are not meant to be read as a seamless single document. They were written for four different audiences, and likely the writers never thought their gospel would be stacked up against another for comparison sake.
Third, they were not written as newspaper accounts. They were written as testaments to events that led to life changing events for the people who experienced them. So each writer has his own point of view, his own audience, and SELECTS information to fit his thesis.
I prefer to read one gospel and concentrate on how it is telling a story. Among them, Mark is my favorite--for his breathlessness and impatience. Extraneous details begone.
John, while very poetic, drones on and on. Rather like a boring preacher.
Finally, the wonderful work by Elaine Pagels on the gnostic gospels puts an interesting light on the way in which the early church picked and chose the texts to canonize--to shore up orthodoxy and banish gnosticism.
Thanks for getting my rusty brain recalling ideas from days of yore.