Two summers ago, my nephew was married on this vacation property, Riverwood, owned by my brother-in-law, George. He (my nephew, not my brother-in-law) married a lovely girl who escaped from an Eastern European nation with her family when she was young. That evening, among other topics, the father of the bride, Herb, and I talked about the good and bad in Canada. Strike that; let's rather say that we talked about that which was good in Canada and that which could be better.

Where he comes from, and I believe that this concept holds in a number of European countries, the public has a certain right or freedom to walk across some corners of private land. What I understand that to mean, for example, is that if one wants to go for a walk in the countryside, he or she may have the right to walk through bits and pieces of private property in order to facilitate this, perhaps to connect with a public trail for example. I don't understand the intricacies of this arrangement, since it is obvious that people can't go rambling willy-nilly all over the place and drop in for tea when you and the missus have just donned (or doffed) your jammies. According to Herb, ramblers seem to appreciate and respect the privilege and are generally at pains to behave appropriately.

He mentioned that when he first came to Canada he decided to treat his family to a summer's day outing by taking them to a lake. When he got there, he found the lake almost impossible to access. Perhaps it was impossible; I don't recall the exact upshot of that adventure, but you take my point, I'm sure.

Take this property, Riverwood, for example. A river forms the eastern boundary. On the other side of the river are vast acres of forest. From aerial photos that I have seen, I would venture to say that there exists well over a thousand acres of uninhabited land. When brother-in-law, George, granted some of his local friends, who are hunters, permission to erect a little footbridge from his side of the river to the other, reaction was swift. I don't even know how the absentee owner found out, but shortly after the bridge was built, a chain appeared on the other side to effectively barricade and safeguard yon wilderness from who knows what.

With all of that primeval forest , I can barely fathom how anyone was able to discover that a bridge had been erected, but they did. And why do they really care whether someone put his or her tiny foot on a small slice of such a vast landholding? But they do. If they are simply anti-hunter, I would have much sympathy, but, rather, it appears that they become apoplectic over the prospect of any lowly commoner setting foot upon their domain.

This isn't suburbia, you understand. We are not talking about somebody having a wild party on your front, postage-stamp lawn. This is wilderness, rather vast wilderness. There is no evidence of human habitation anywhere near the part of the property of which we speak. I can't see any sort of dwelling over there for many a mile when I take magnifying glass to the aerial photo.

Why are they, and why are we all so protective? Is it fear of lawsuit? Is it selfish greed?

Do you think there something just a wee bit skewed with our North American values?

George informs me that landowners worry about giving up a right of easement, that if people freely use your property to access something or other for a certain period of time, that they eventually establish some sort of legal right to continue to use it in some kind of perpetuity. I can understand that, but such prompt reaction seems rather excessive to me. Can't people talk to each other for goodness sake? And although I understand it, and admit that I might be similarly protective if it were my land, the whole thing still saddens me to some degree. Why are we more concerned with private rights that the public good? Why are we fearful by nature rather than generous of spirit? 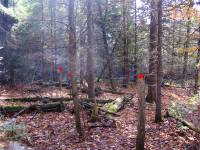 What brings this all freshly to mind is that we were out walking the property line today: the northern boundary this time. With the aid of a GPS and ancient, rotting fence posts, we were able to accomplish the task although, mighty explorers that we are, we had to forge through and around some difficult patches and thickets at times. Well, you can see some of the boundary in the photo (left). This was a relatively thin spot, so don't please don't think me too hyperbolic by referring to thickets as I did above. Although it's difficult to spot in such a tiny thumbnail image, I have put red dots on three fence posts for your elucidation. Two are wood, and one is a metal post. These three were standing, but many of their comrades were fallen.

If you are wondering why there was a fence through the forest, I believe that it is old, probably at least fifty years and possibly even older. I believe that it was erected when it wasn't all forested here: that, in the dark past, it was there to keep cows, sheep, goats, pigs, horses, mules and what-have-you contained. 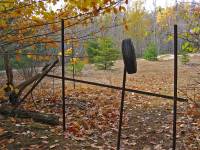 Regardless: while walking this boundary line, we came across the newly-erected barrier that you see in the second photo (to your right). The owner of that land is clearly doing his best to discourage nasty, would-be trespassers. Does that mean me because I have walked or snowshoed over there once or twice a year, or is he trying to discourage snowmobilers or ATV riders who can be noisy and heedless of the hour? Or perhaps it's because deer-hunting season is almost upon us and he simply doesn't want nasty hunters doing their foul deeds on his land (this, I understand!)? Perhaps he frets over easement rights?

I guess I can grudgingly accept that he not only has a right to do this but probably has reasons which are valid — valid to him at least. But I don't have to like it, and I am free to wish that we could all be more generous and open-hearted with our bounty.

Don't they teach us to share in kindergarten after all? If sharing is good for the kiddies, why isn't it good for the adults?

Posted by Anvilcloud at 7:25 pm

My house sits on five wooded acres that abuts other tracts of land; some public, most private. While this hardly makes me laird of hill and dale, I do take special pride of ownership, but also a sense of egalitarian generosity. I haven't posted the property and have no problems with walkers or hunters using portions of the property.

Recently, however, I had a problem with some Neaderthal ATV-ers... Not only did they tear through the woods, but they came through my back yard and down the driveway. I've since had to obstruct the trails I've cut to prevent the abuse. I haven't, however, posted the property (no trespassing signs).

It all about respect.