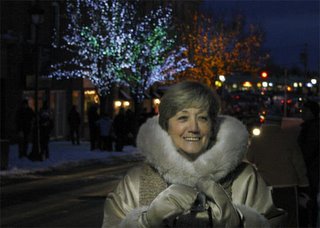 It's been quite a long time since we last went to a Santa Claus Parade, but since our new town was holding theirs on the same day as our tree decorating party, we decided that it was time to remedy that oversight. Apparently, for the past few years, they have been holding the annual parade at night, and I must say that it helps to set a nice mood. Lots of people attended, and a high spirits filled the air. I took this shot of Cuppa before it began. Behind her, you can see the lights on Main Street. Although they look mighty festive, they are actually left up all year round, and I think they're a great touch.

As you can see, minutes before the parade, cars were still driving the street, but the oddest thing was that they were allowed to park on one side of the street during the parade. Indeed, a few chose to watch from that vantage point. I found that to be very strange, indeed. 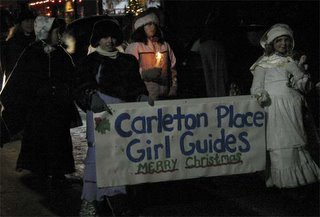 For a small town, the parade was surprisingly long. Of course, there were no spectacular floats. A lot of trucks went by pulling trailers of people trying to assume Christmasy poses. There were a lot of walk-bys, like the Girl Guides in the photo to the left, and many participants were dressed in old-fashioned, Dickens-like garb. There were three small highland bands with bagpipes and drums, but no real marching bands as such.

My American friends may not realize that marching bands are pretty much an American phenomenon. We have some in Canada at the community level, but as far as I know, no Canadian high school offers a marching band program. Of course, we have high school bands but of an orchestral and/or jazzy nature.

Sarnia, where we lived until recently, was a border town (with Michigan, 60 miles north of Detroit). Due to that location and it being a larger centre, they were always able to attract several big American marching bands, and they were always impressively terrific.

But all in all, I liked this small town parade very much. No one expected huge, fancy floats. They expected spirit and fun, and they were not disappointed. And that includes me.

Confession: I haven't read this post. I just wanted to drop by and see if you were still around. I'm actually running late for work, so I can't stay.

I love the festive look! :)

I probably would prefer the small town parade, and to see the homespun touches, as you describe. We are tired of BIG, been there, done that. Your evening looked charming - and Cuppa too.

We don't have a town parade here, we have a county parade (our largest town, indeed the only incorporated town in the county, has a population of a little over 300). It is quite similar to the one you describe. We do, however, have a marching band!

This sounds like a very enjoyable outing. I love the small town spirit.
Cuppa looks lovely in the photo.

I too enjoy the spirit and the fun. ec

Cuppa looks smashing! Nice to drop by and find the festive thing going on in your part of the world. A cheery Christmas season to you both.

When I lived in Texas, each year I went with a friend to the Christmas parade. It was always very cold but your post brings back warm memories.

I love a small town parade!

I was rather surprised when you noted that no Canadian High School's have marching bands. DAD!!!! My high school had quite a big marching band! I can still see them in my mind's eye, all decked out in purple and white, doing their thing before football games and stuff.