In my previous post I mentioned our disappointment of the snowstorm cancelling our movie plans. They are now on for Sunday, so all shall be well. There is the slight downer that the tickets were prepaid, so we have to pay all over again, but that's life.

Anyway, after writing that post, Sue and I went for a stroll about the neighbourhood. First we did a bit of shovelling.

You can see that it was a fairly major fall for just one storm. You can also see that the contractor that we hire kind of missed the mark. He is supposed to clear up to the edge of the driveway, but he just cleared the width of the garage door, and our garage door is a small one.

So, while I was finishing up inside the house, Sue cleared a section to show the proper width. (You can see the shear cut that she left toward the middle of the frame as a guideline for him to follow.) 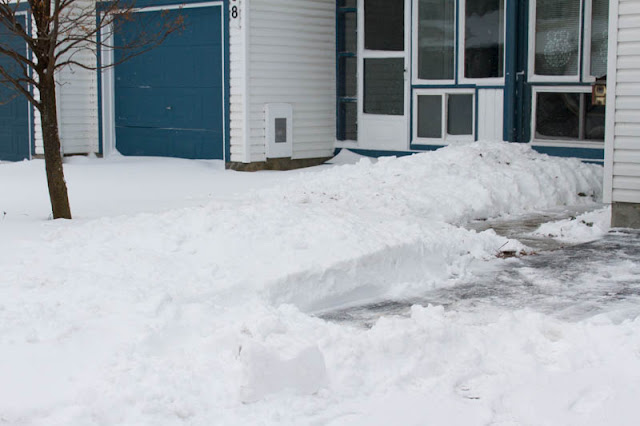 Then, I cleared the sidewalk, which is what we are supposed to do, except most citizens don't bother. You can see where I ended my shovelling in the following photo which is where the neighbour's property begins. When said neighbour came home, he used his snowblower to clear his driveway so he could park his car. Did he bother with that little section of sidewalk even though he had a snowblower? I expect you know the answer. 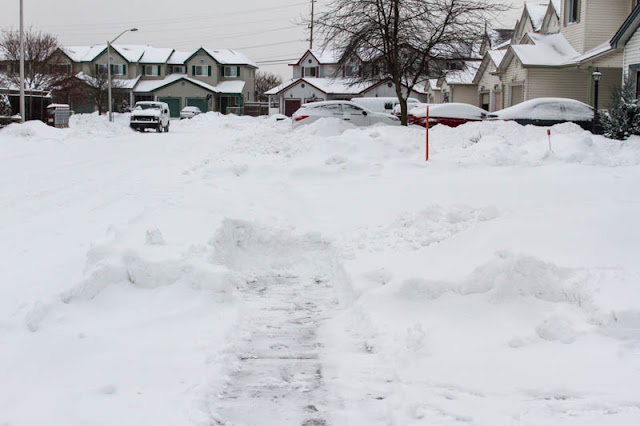 After the shovelling, wff we went on our walk and headed to the park. 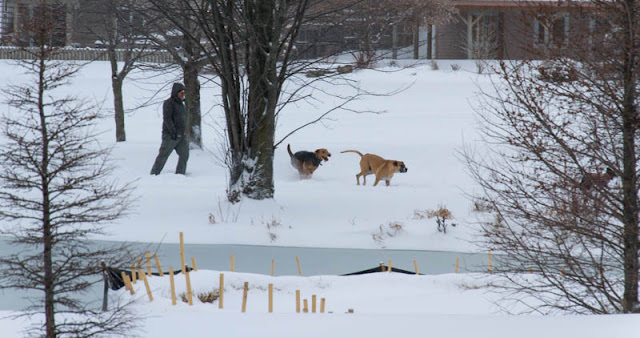 I snapped this picture ↑ of a guy with his dogs, and this one ↓ including his son or SIL and his grandkid. 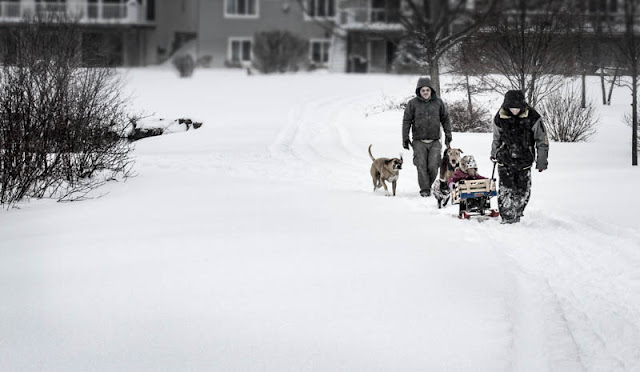 The slogging was a little heavy (see Sue below), but it is a small park, so it wasn't too onerous. 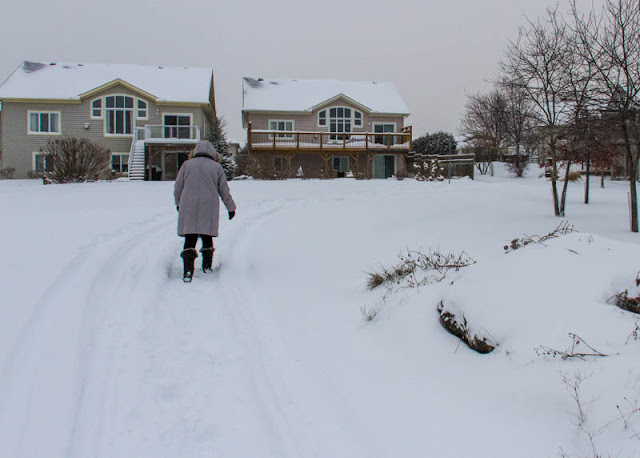 Upon exiting the park, we soon came across another person with another dog pulling another sled with her child onboard. 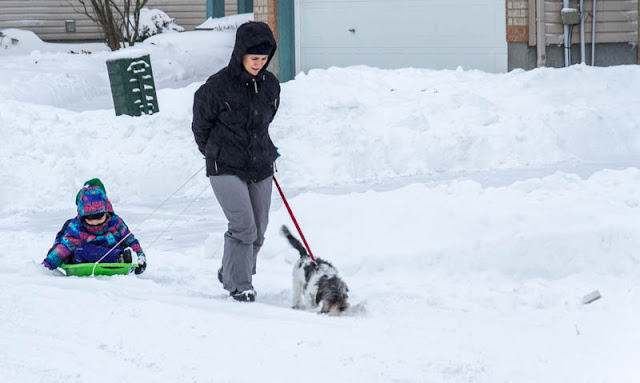 Back on our street, we saw our snow clearing guy up yonder. Except, he somehow bypassed our place. We had to call them back the next day, and all was well. This is our third of fourth year contracting with this outfit, and they do a good job, but with new drivers on the first snow of the season and it being a big one during the Christmas holidays, there were some kinks to work out. I am sure that all will be fine as the winter progresses. 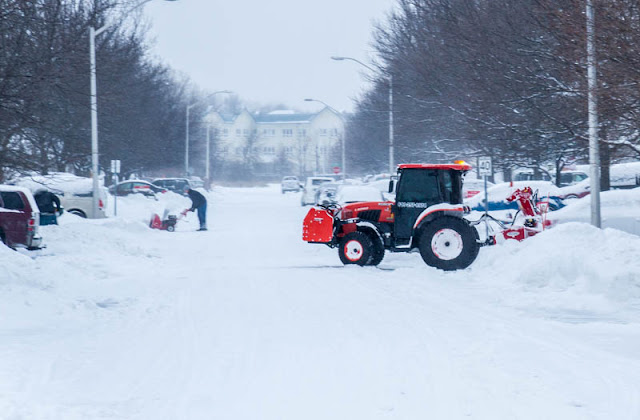 Just thought a few folk beyond the snow belt would like to see what it looks like around here after a snowfall. How amazing that this was all from one fall; it had been bare the day before.

Enough snow for now for sure. Enjoy the movie. Happy New Year to you and your family!

Ah you are having a real winter. Keep safe and warm and get a NEW snow clearer!! Have a wonderful 2016!

Mother Nature dumped on you!

I'm getting old and cranky. I really do think people are becoming more and more selfish...and lazy. I mean, why clear the sidewalk if you can get away with not doing it. Why turn down the high beams on your car, after all you can see so who cares about the other guy? Why slow your car down in someone else's neighbourhood (but you better watch your speed in mine)! I guess I had better get down off my soapbox! ;)

Happy New Year!!
I imagine it must be hard for the snow guy to find your houses!
Wow!! That looks so Cold!!
Stay warm up there Ac!
hughugs

When I woke up this a.m. it was 70° in with 70 % humidity. BRRR! That's winter
in Hawaii.
The snow is lovely,though. But I don't think my old bones could deal with the cold any more.

it is pretty, but i don't miss dealing with heavy snows for months on end. :)

Wowzer, that's some snow! We got the rains- over 6 inches and tornados blowing here and there. It was just awful- many displaced due to flooding and many deaths. I hope not to see another year like 2015.

My goodness me, you had loads more snow that i did!

Here in central Indiana, USofA, we are still awaiting a grand snowfall. Our winter has seemingly been more like either late fall or early spring. Our local weather person has assured us that we will get a snowfall as early as tomorrow. But, alas! The previously expected 3-5 inches, has been reduced to 1-2 inches. A disappointment I am sure for some, but certainly not this lover of warmth. Even if we don't get a copious quantity of snow, temperatures are predicted to plummet to new lows mid-week. John, your pictures are beautiful. I always marvel at anyone's snow pictures. It seems that the beauty of snow just covers a multitude of ugliness. I look forward to being able to snap a few shots if we get the predicted inch or two. Of course we still have February and the first part of March to get through. That can be brutal!