Our town always holds its Santa Parade at 5PM on a Saturday in late November. It makes for challenging photography at times, especially when one brings too long of a lens. I found my 70-200mm lens too tight for for most part since we were pretty close to the action. Achieving focus was sometimes a problem, especially on near, quick shots. But it was fun, and I was able to nab a few shots. 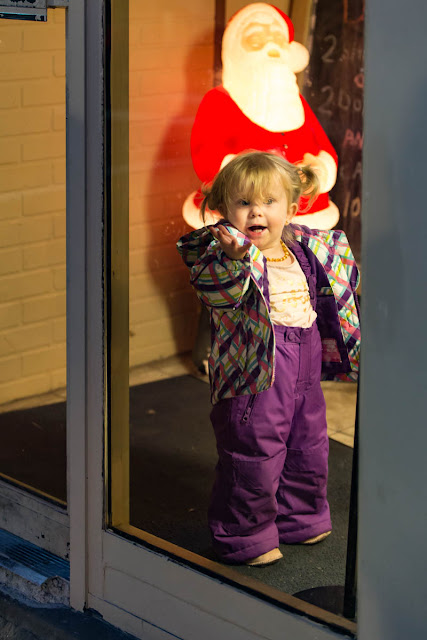 This bonnie, wee lass ↑ loved the camera and called excitedly to her parents when I focused on her before the parade began. 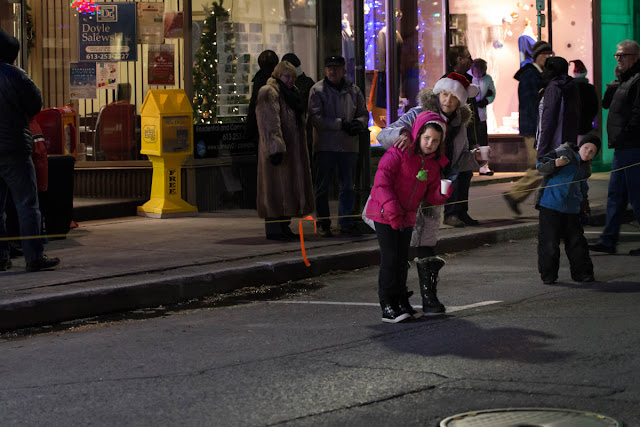 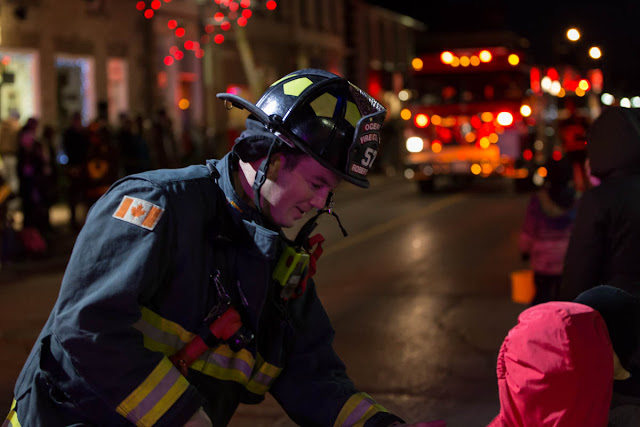 A nod to the past with this horse and buggy. ↓ 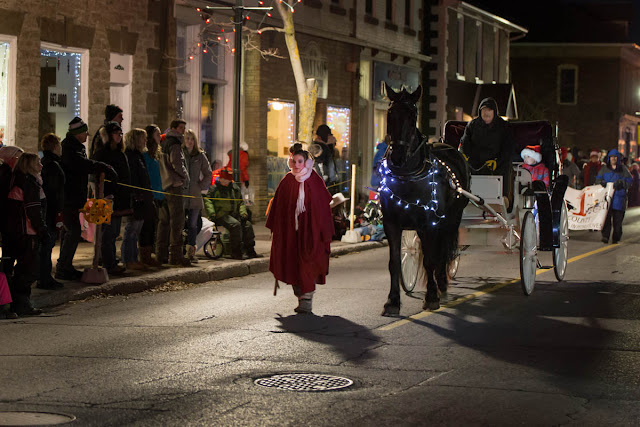 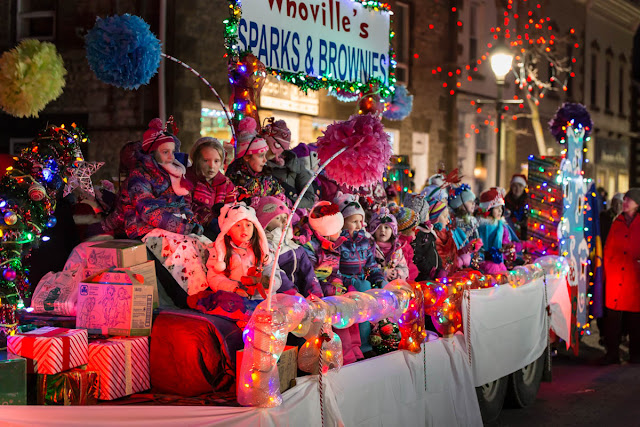 ↓ Citizen of the Year 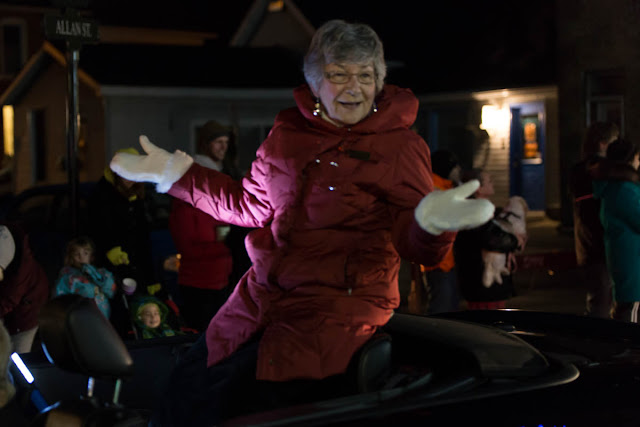 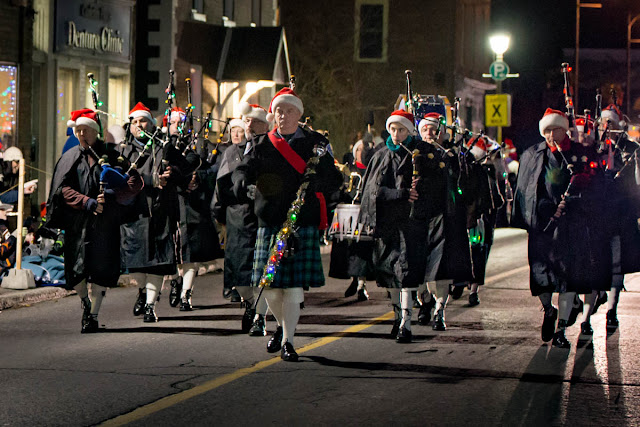 ↑ ↓ The parade would be incomplete without pipers. 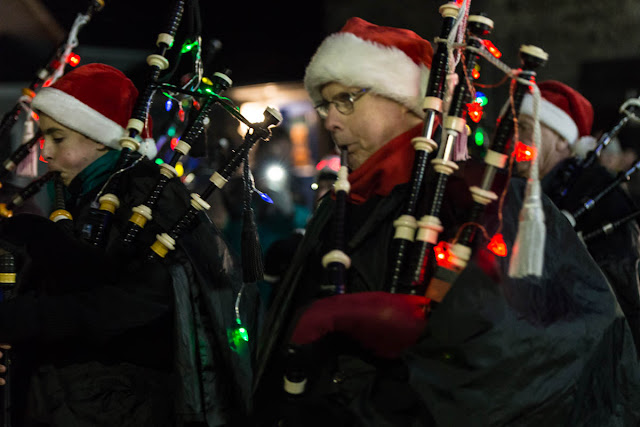 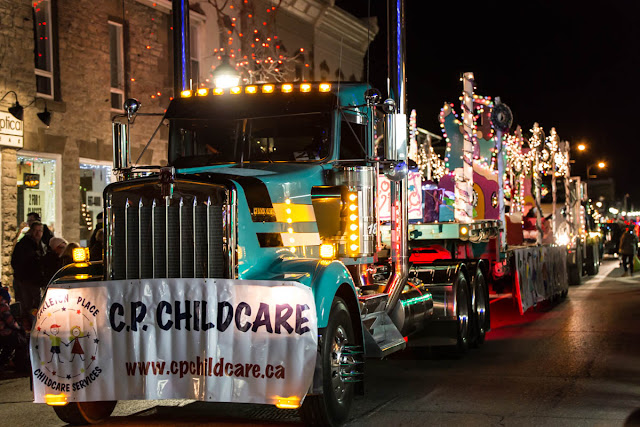 This isn't Macy's or Eaton's: ↑ one of our bigger floats. Many are pulled by pickups ... or whatever is at hand. ↓ 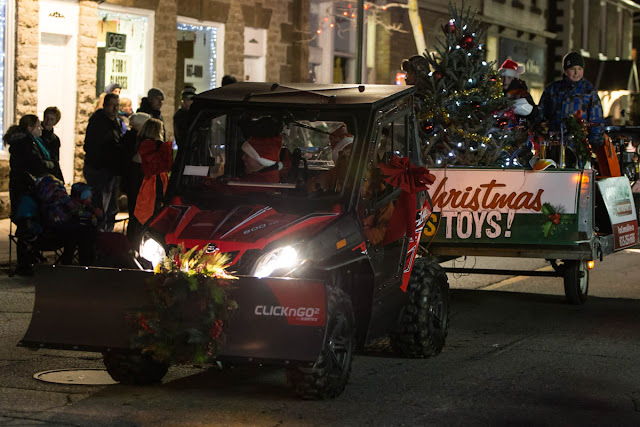 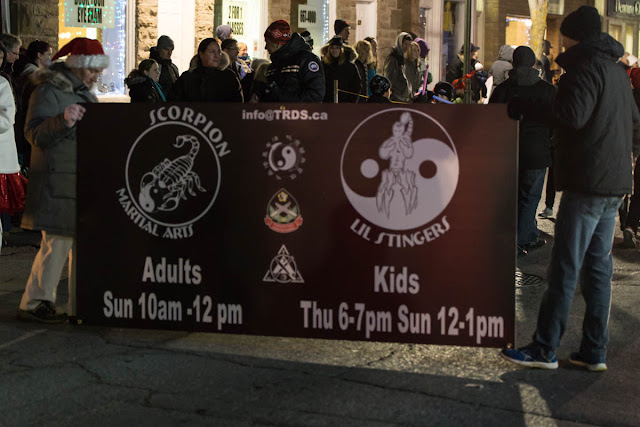 Most floats or groups were introduced by banners. ↑ ↓ 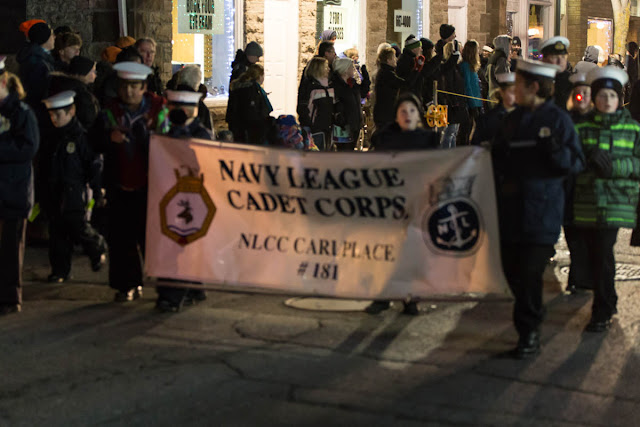 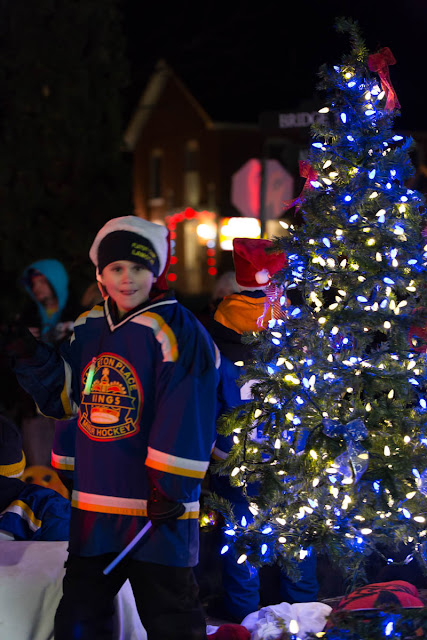 It is Canada, and hockey was well represented. ↑ ↓ 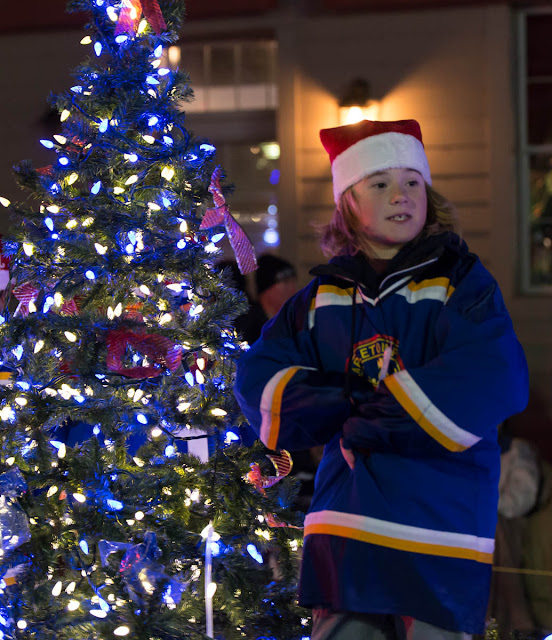 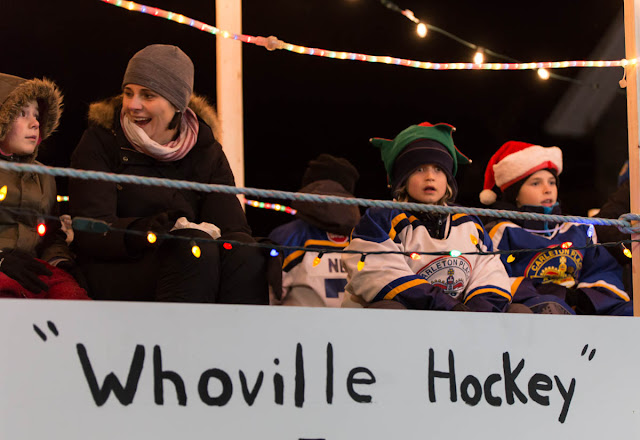 Whoville was this year's theme. ↑ ↓ 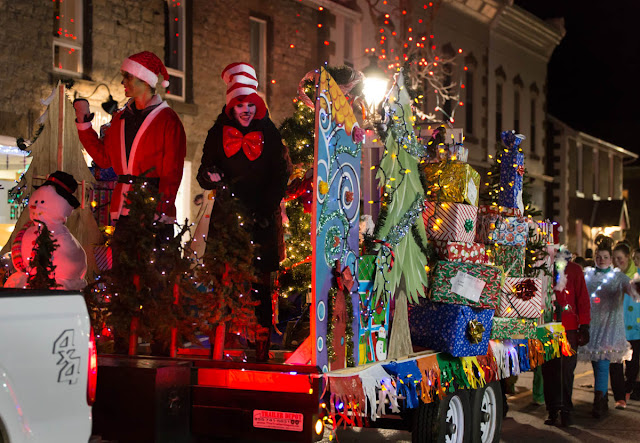 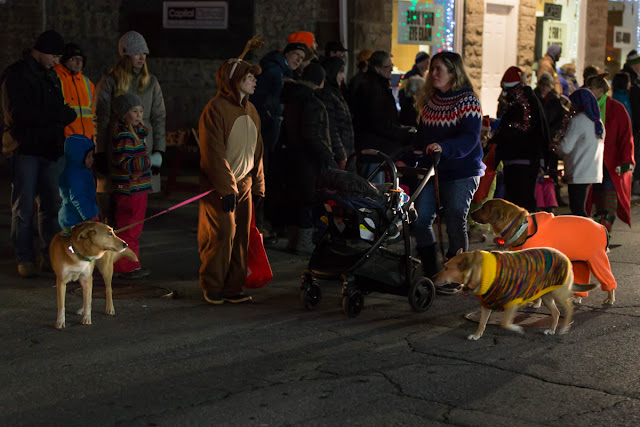 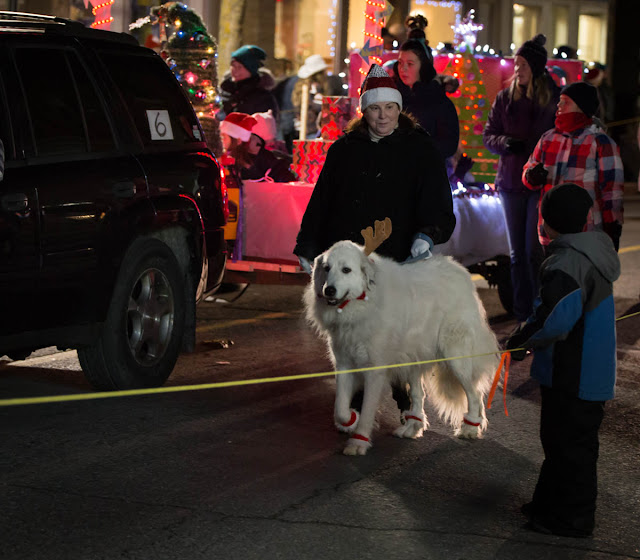 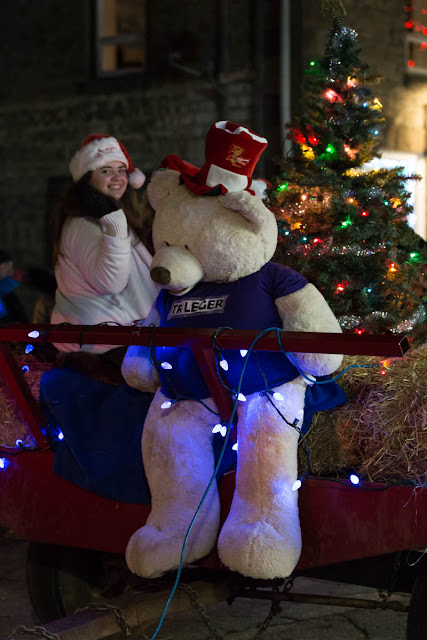 The traditional story: definitely not Whoville. ↓ 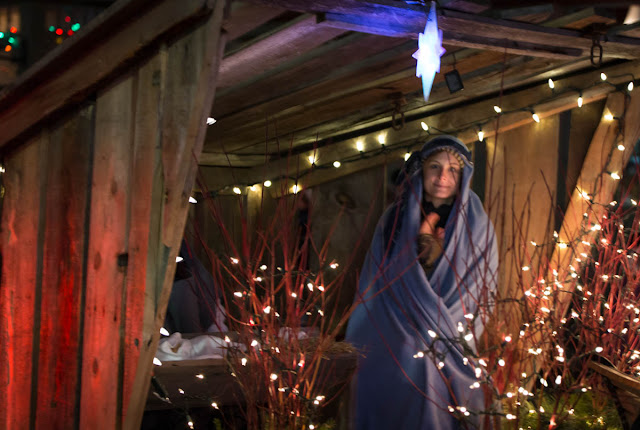 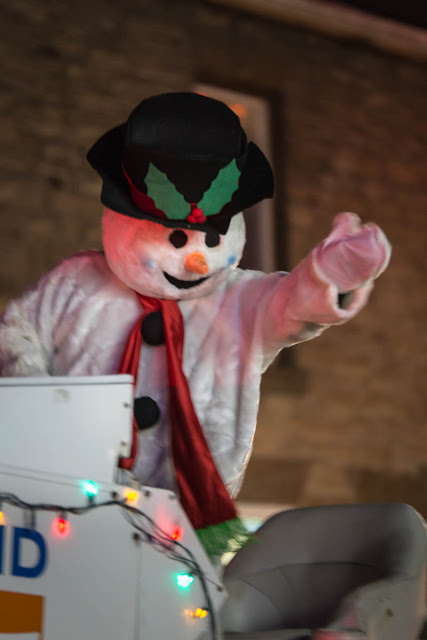 The drummer from the high school band. ↓ In a cultural difference from the USA, we don't usually do marching bands in our high schools, so they rode on a float. Some communities do have marching bands, but ours is too small. 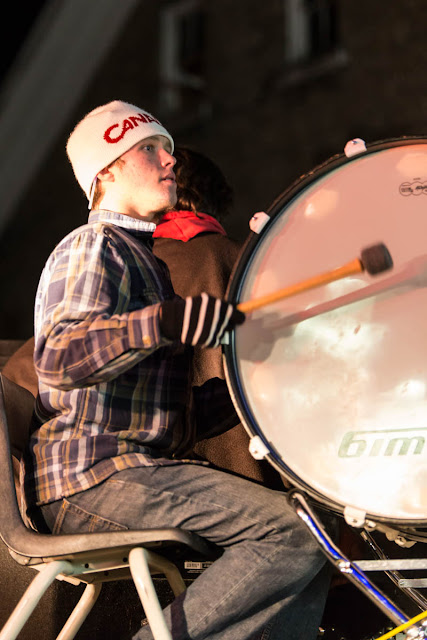 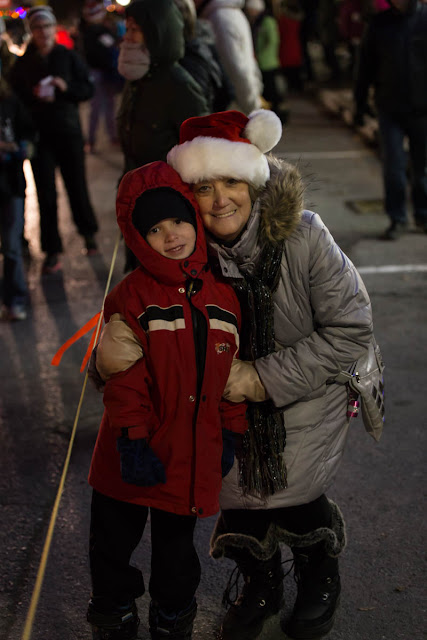 Grandma and the kids enjoyed themselves. ↑ ↓ 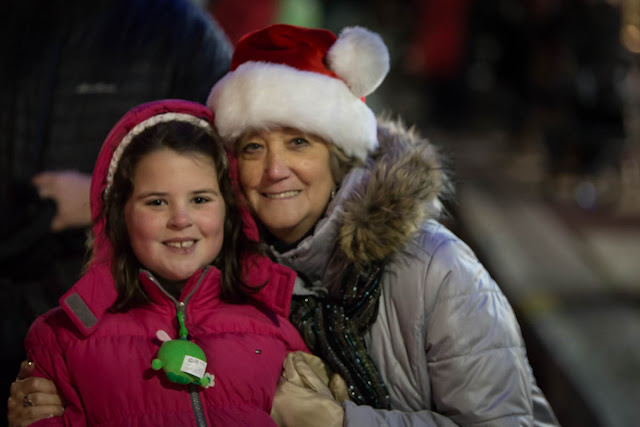 No Santa shot for me. I took some, but they were terrible. Better luck next year.

The week before, we had our annual trimming of the tree at Sha's house. Here is a link to Sue's blog: no sense duplicating. The top two posts are about the tree party.
Posted by Anvilcloud at 10:30 am

Fantastic shots ! Looks like all had a great time ! Thanks for sharing , Have a good day !

I enjoyed your parade. It's a bit fancier than the one in my village. ;)

All wonderful photos, must have been a nice event.

Great parade for a small town. Love the parades at night.

Carleton Place always seems like such a nice place to live.

Looks good to me.

Our local small town Santa claus parade was last saturday afternoon.... the highlight for me was a huge dump truck set up as a Giant Hot Tub with half naked hot tubbers cavorting in it with wine glasses and Santa hats!
Then in the evening I was at the Schomberg Santa Parade, all huge farm equipment covered with lights, will post some pics soon.
Love all the santa parades, it really puts me in the Christmas mood.

Such warm and wonderful captures! Thank you!

Your pictures reminded me of the sort of parade we used to have when I was a child ... before we all got so "sophisticated" !! I love the last shot with your lovely wife and Danica.

looks like a lot of fun. i'd enjoy those pipers!