The Transit of Venus


Two weekends past Cuppa and I met a very interesting guy, Frank, in the park of a nearby town. Somewhat puzzling to us was that he had his big telescope out on a sunny day. He would sit in the shade and read a book but gladly get up to show his telescope to anyone who showed an interest. 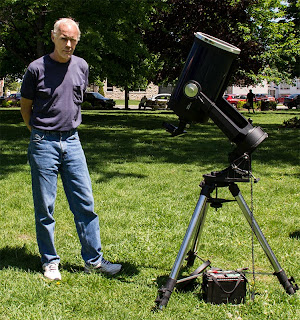 It turned out that he was showing the sun, but in that huge disc, which filled the telescope, we could see several sunspots. They looked very little but he pointed out that they were actually larger than the earth. 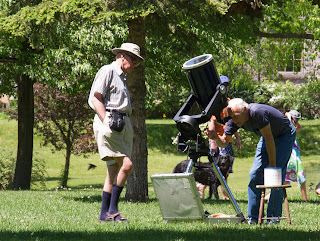 One thing he talked about is the impending transit of Venus about to take place on June 05 and 06. What that means is that earthlings will be able to see our nearest planetary neighbour cross the surface of the sun. Actually, although we can see it, we mustn't look without proper eye protection -- the same as what we use to view solar eclipses. If the weather permits, Frank will set up his telescope so that people can drop by and see a bit of the transit safely. We won't be there because he won't be set up in our town, but it will be a great opportunity for those who can make it. 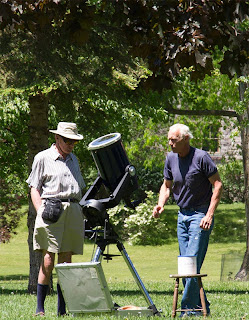 If you are wondering what the big deal is, it's because it's such an unusual event. Although we had a transit recently in 2004, the next won't will not occur until 2117. In other words, no one or almost no one who is alive today will get another opportunity to witness the event.

The historical significance is that in 1796, astronomers from all over the world, including the famous Captain Cook (not Hook) who was dispatched to Tahiti to record the event. Using triangulation from these sightings, humans were first able to calculate pretty closely the distance from the earth to the sun. They came up with a figure of 153 000 000 km +- 1 000 000 km, which is pretty close to the distance at our farthest point of orbit as we calculate it more than two centuries later.

The event will begin at 18:09/6:09PM EDT on June 05. But remember don't look unless you have proper viewing equipment.

This video of almost 4 minutes explains the transit quite well.

Posted by Anvilcloud at 5:00 am

Astronomy is one of those academic areas that I thought I would have so enjoyed (had only my math skills been a touch better).
So, when Venus passes between the sun and earth, will we see things from which we can learn more.
By the way, speaking of math, I thought 2117--well, I might be alive 5 years from now...but then I thought, wait. That 2117, not 2017.
Sigh.

you are such a conduit for knowledge.

Wouldn't you Love to own a telescope like that? Wow!
I wonder how they knew in 1796 to Not look at the Sun when this happened...or did they...
And are you SURE it wasn't Hook??Hahaa...
Have a great day Ac!
hughugs

Am I ever behind in blog reading! I should have seen this before Tuesday. My mind can hardly fathom how people figure these things out.