It's only the third of December, and it's not even officially winter, but this morning must have been my sixth shovelling, and some other kind, anonymous soul (the neighbour you will see in pictures below I expect) has done it at least one other time. 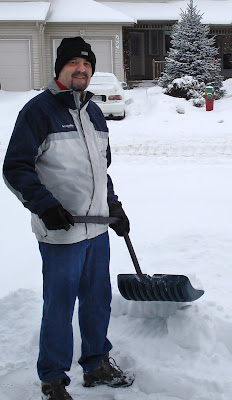 Some folks were already out there when I made my appearance this morning. There were at least two snowblowers blowing: one helping out some of our less healthy neighbours. But I got out there using the old-fashioned method and had most of the driveway cleared before friendly neighbour #2 asked if I would like her to finish it for me. Yes, I liked. Not that I wasn't enjoying myself in my own peculiar way, but too much snow shovelling can be hard on the heart, and one has to also exercise caution while exercising the body. 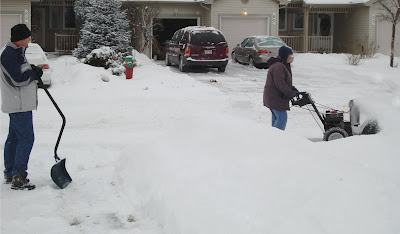 Although I would no doubt feel differently about shovelling if I had to do it at seven o'clock in the morning to get to work on time, I don't mind the chore when I can take my time. It's partly a matter of attitude. We can make choices. I could choose to regard shovelling as intrusive and holding me back from other things, or I can relax and enjoy the air ad the exercise, and that is what I chose to do.

But I think neighbour was having even more fun with her new blower . 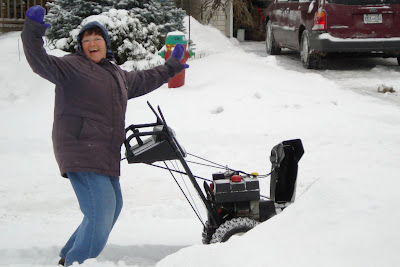 We too have had our fair share.. but it looks like you beat us in the number of centimeters. Your neighbour appears to epitomize the right attitude. :-)

We got our second dusting of the fluffy white stuff yesterday and I think we have already shovelled more times this year than all of last year combined.

We too have an enthusiastically happy neighbour who goes around helping everyone plow their driveways. Between that and his leafblower, I think the man is a saint.

Glad to see you enjoying the first big snowfall. I think you got more than I did.

I would throw a snowball at that cheerful lady snowblower operator.

I do a little shoveling as possible. What god put there he will take away. Eventually a neighbour with a plow takes pity on me.

I too enjoy shovelling. I enjoy the snow-but not the extreme cold so much.

Unfortunately the snowblower we own is just a little to heavy for me to handle. ;)