It's the little things that mean a lot. Last weekend was our Victoria Day weekend, the Canadian long weekend near the end of May.

It is the traditional gardening weekend in Canada, or at least in the parts of Canada where I have lived. Despite the fact that many folks jump the gun, nurseries advise us to wait until that weekend for planting because any time before that we risk frost. Actually, we sometimes risk frost later, but that's about all of the patient biding of time that we can stand after a long winter and a slow-coming spring. So it was that we found ourselves at the garden centre or two garden centres really.

In our family, I have taken care of perennials while Sue has been in charge of bedding plants and flower pots, of which we have many. And with my back gone all wonky, I hovered in the background of the nurseries while my lady picked out her plants. She picked this one ↓ among many. 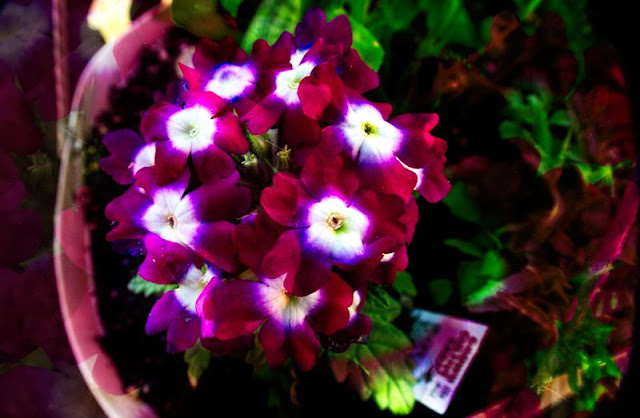 She liked it, but what was it? Neither she and the lady whom Sue had befriended (something Sue is good at) could bring it to mind.

That\s when myself piped up, "Verbena." They agreed, and I was inordinately pleased with myself.

You see, as I creep into my dotage, I increasingly find myself searching my vacant brain for words. I begin to say something to someone, but that blasted word eludes me. It's frustrating and a tad scary. I had never thought about it, but Ruth's recent post identified the phenomenon as "losing your nouns."

At this point in time, the nouns come back to me, usually before too long and often when I think of the object differently, but, nevertheless, it reminds me of my father to whom the sun and moon became the "big fella and the little guy." Or at least, we think that is what he meant.

So, coming up with the name, Verbena, when it eluded the two ladies was somewhat reassuring.

Posted by Anvilcloud at 7:02 am

hmmmm... this sounds all too familiar. Usually the recalcitrant nouns return after a bit of focussed thinking, but you are right, it's a bit disconcerting!

Verbena is one of my all time fav flowers for summer planting. And I think it has a certain scent with it that attracts bees.

I have several perennials, thanks to my late wife, and a new "Knock-Out" rose bush. Other than that, I shy away from annuals. I have a "black thumb" when it comes to them. I do buy 1 or 2 handing pots for the entries, but that's it. My neighbors, who are MUCH younger than I am, have enough beauty in their yard for the whole block. Right now, my rose is outshining everything!
As for forgetfulness, welcome to the club! I have trouble remembering what I went into a room for, so I backtrack, and it usually comes to me. Age 71 isn't for sissies!!

Oh boy. I recognize that syndrome. Having a parent with dementia, any forgotten word or detail scares me.

You could have cheated and had a peek at the label.

I am notoriously chasing plant names and that is why I no longer tell people I am a Master Gardener.

It's very reassuring for me to read your post. I'm finding myself unable to recall names. Sigh... Granted, I was always bad at it but it's chronic now.

My husband wants me to keep blogging just to keep up my word retrieval skills. Good grief! I had to look up "word retrieval" because I kept thinking "word recall". Arrrghhh!

When I can't remember a word or some information, I say, "How soon do you want to know?" Chances are I'll remember the answer later but we have a laugh at the time anyway.

My theory is that by the time you pass middle age your brain is crammed with huge amounts of information and memories. It is like a desk covered with papers that need to filed in an organized way. The information is there, just not in the second you need it. I am sure you saw last year's animated movie "Inside Out" with your grandkids. (I saw it 4 times and I don't have grandkids!). It was a great look at memory and emotion and quite accurate in many ways.
Glad you named the flower...I don't have that ID in my memory bank.

I, too, find my memory faulty but isn't it satisfying when you do get the answer. Verbena (especially that gorgeous shade) will certainly brighten up your garden.

I can understand the struggle with words. MY 11-years-younger husband helps out a lot, but he's not much interested in flowers so I keep a folder on the computer of description and names!

Good for you! I once knew the name of all the different evergreens in our yard --now it's 'the yellow one, the blue-ish one, the one with the pink new cones": gone, alas, all gone. But I can remember poems I memorized sixty years ago. Perhaps rhyme and rhythm are the key...

I thought Verbena was a drink? Oh, hold on, that's Ribena. *Sigh*

This goes to show, AC, that you did not forget your gardening past. Take heart that the information was in your brain.

Yes, I am quite familiar with losing my nouns. It is VERY frustrating, but so far, the words always come to me. Pretty flowers, whatever they are! Happy gardening!

"losing your nouns" is a common factor these days, even for the middle aged.

I have been losing nouns all my life. Faulty wet ware wiring, I guess. It is getting worse. However, my father had the same problem and could sound like an idiot, but he was still making good money on the stock market at age 85, so maybe there is hope for me. Although not on the stock market.