Sunday was a particularly miserable day: cold and completely overcast. So cold that we were tempted to run the furnace. We resisted, but even to be tempted at the end of May tells you something — even in Canada.

With all of the clouds, the last thing I expected to see was a sunset. But there was a sunset, and it was phenomenal. It was so phenomenal that there were photos all over Twitter, and even the radio was waxing enthusiastic the next morning.

From time to time, we see really nice sunsets from the back windows of our townie, but due to sightlines, I never bother to get the camera out. However, I did take both the camera and me out to the back stoop where I took this photo. Pretty fantastic, eh? 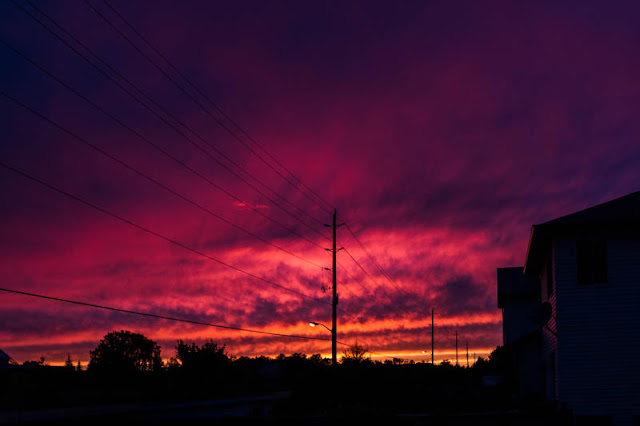 Even with poles and powerlines, I am rather impressed.

In other news, I am getting some annoying spam these days. This has not been a usual problems for me, and I have been happy to seek and delete the occasional piece. But enough is enough, so I have turned on Comment Moderation for now. I do wish Blogger was more like WordPress and allowed you to accept or reject a commenter once and for all, but since Blogger is the almost forgotten ugly child of the Google Empire, it sits forlornly and neglectedly in the corner, waiting for someone to notice and apply quick and easy fixes.

Hopefully, a week or two of moderation will stop the spam because I hate it. Maybe I could turn verification on, but I'll do it this way for now.

Wasn't that the most inspiring sunset ever?

No doubt you are suffering from Sophia and Ana. I get hit about five times a day but have found if I select to moderate comments over two days old it works.

That is just such an amazing sunset!

Magnificent colour! I can see why everyone was talking about it!

I also get the feeling that Blogger is a forgotten child. :(

But wow, that sky is on fire! Nice capture.

Even with the sightlines, it's an amazing sunset, John. Too bad and so annoying that spammers manage to spoil things for folks. Occasionally we get a comment that needs to be deleted, but it has happened less often. Hope the moderation works as it's more time consuming for the blog author. We have been talking about starting a new blog and perhaps WordPress bears checking into.

I had lots of anonymous spam too, so I changed my settings to accepting comments from everyone, to just registered users. Just did that yesterday so I have yet to find out if it works.