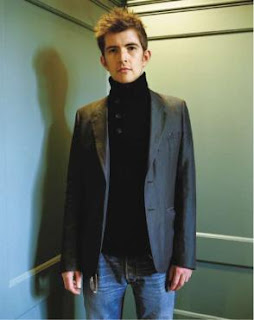 It has been more than a month since I last mentioned The Choir, a Britsh tv that followed Gareth Malone as he took on two very formidable challenges. His first challenge was to form a choir at Northolt High School in the London borough of Ealing, Middlesex and then taking the group to China, to compete in the World Choir Games. I stumbled uping the four-part series in the wee hours one night and was hooked by his struggles, tenacity and personality. Although they didn't win the event or even advance beyond the first round, the series was rivetting and both his and the choir's accomplishment was significant.

I was quite thrilled to find that there was a sequel which finished (on the network I was watching) last week, for just one year later, he attempted what was arguably an even more difficult assignment at an all boys school in Leicester. Once again, he prevailed against huge odds by starting a choir and taking more than 100 members to perform at a concert at Royal Albert Hall. Boys Don't Sing was also rivetting and inspiring. I urge you to watch either of these series if ever you can. Meanwhile, here is a YouTube clip of the boy's performance at the Royal Albert.

I couldn't help but really really really liking and respecting Gareth, and this article indicates that I am not alone, for everybody seems to love this guy.

But where was he when I needed him?

Note: I will be away this week in unreliable internet territory. Although I have pre-posted a few blogs, it's almost certain that I will be unable to visit yours until sometime next week.
Posted by Anvilcloud at 6:00 am

I kept thinking they were fast, but somehow they all did it together! I have seen glimpses of it, but not followed it. Shame though: that Gareth is quite easy on the eye!

Oh what a wonderful litle bit--I had not heard of this man & his inspiration. Wow--we most certainly need many many more Gareths!

The world (and our children) need more people like this.

always good to hear about talent.

good to know you're out past the wilds of internet. do report back on any grizzlies spotted when you're back, eh? ;)

Thanks for posting about Gareth and the video. I really enjoyed it. The boys are awesome.

Enjoy your adventure, be safe and hurry back so you can tell us all about it.