I guess we should have called the cat, Mee'un instead of Rocky, because wherever I am, the cat seems to be there too. You know, Mee'un the Cat? Maybe he thinks his name is Ruth and that mine is Naomi (see post title).

If I'm snuggled under a blanket watching tv on a cold winter's day, he is quite likely to hop on board, often looking at me longingly which is his way of pleading for scritching. 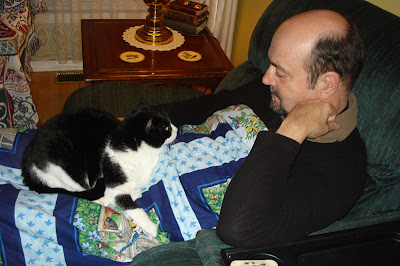 Frequently, I don't sleep well at night, but even when I've only had a few hours, I am unlikely to take a nap on the next day; and, when I do, I keep it short. However, when I did try to snooze a few days ago (below), he soon found me out. He'd like to sleep by my feet every night, but I shoo him over to the shorter-legged Cuppa's side. 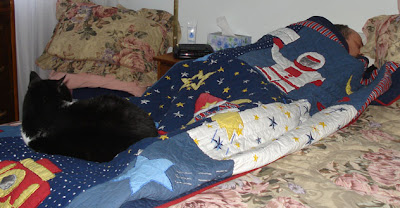 He's a great help at the computer (next two photos), either prancing in front or settling off to the side a bit — of course the more in front and less to the side the better — from his point of view that is. 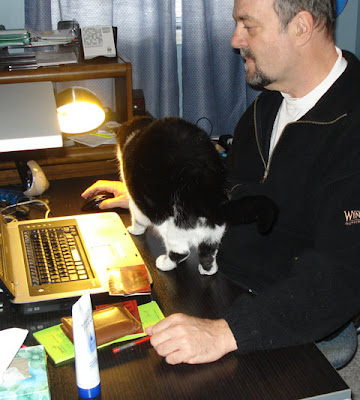 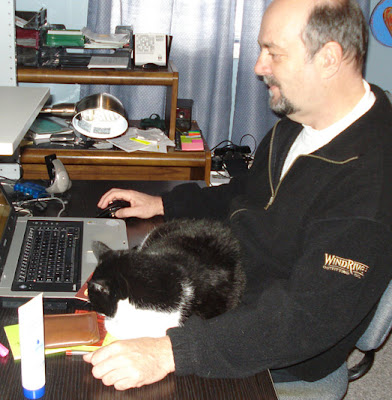 Rocky loves to have a foot rub — my foot doing the rubbing. He'll roll around like a fool in front of me many times during the day. Sometimes, he'll get a rub at the bottom of the stairs, and when I start up, he'll race ahead of me, throw himself on the landing, and wait expectantly for another rub. 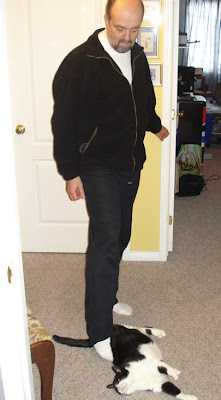 The question is, "Does he enjoy it at all." I'm not sure. What do you think? 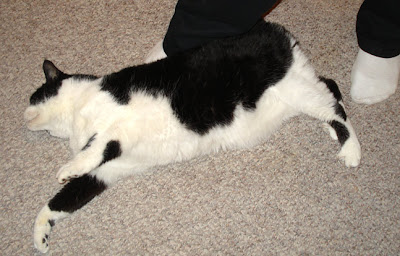 Although he prefers my foot at the back end, trusting soul that he is, he doesn't even mind when I put my foot on his throat. 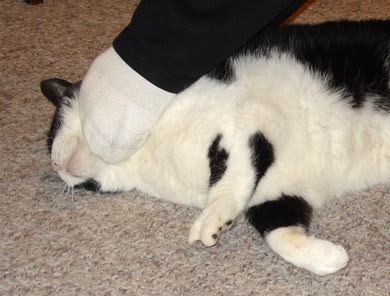 If I sit in my den and read, there's a good chance that I'll have company. Sometimes, at night I'll curl up right there in the chair and attempt to go to sleep after reading, and he'll attempt to perch on my hip. How appropriate is the title of the book I am reading in the photo: A Royal Pain? 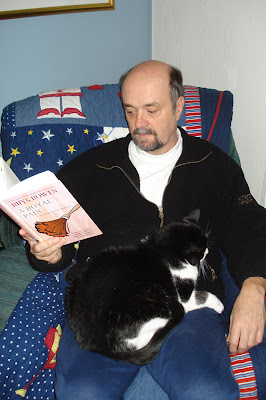 This is an odd thing though. Although I am usually the object of his devotion, in the morning, he must stay on guard until Cuppa awakes (below). When she is up first, however, he doesn't seem to care where I am or what I do. He certainly doesn't stand on guard until I get up. Strange. 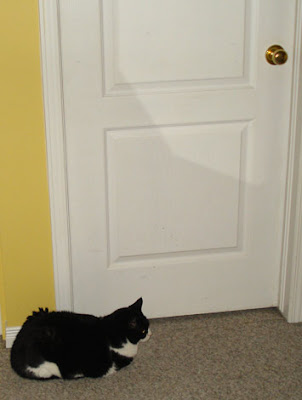 When he first came to us from Thesha's, almost ten years ago, Rocky (aka Mee'un) wouldn't have much to do with me. That lasted from that October until the next summer. One day out in the garden, however, he came to see me for a visit. We chatted amiably and I scritched him while he rolled around all goofy-like, and this is how it has been ever since.

Note: We'll be away for a few more days, but unless I have been able to post something from the cottage (it has been known to happen), this is the final post that I have queued. Oddly enough, I don't usually post this regularly when I'm at home.
Posted by Anvilcloud at 6:00 am

Clearly, he recognises you're a bit of a pussy cat yourself....

Awww, Rocky loves you. I remember sweet times like that with my cat before my husband and his allergies!

Have fun at the cottage!

In my "vast" cat experiences, cats choose whom they will. Nothing any human can say or do will change that.
Consider yourself chosen, and lucky.

Cats choose their slaves and once chosen it seems to be a lifelong job. I'm a slave to four of them and they all have their own foibles and wishes. However trying to interfere with my computer is fortunately not one of them.

You can tell he loves you. I love the way he sits by the computer. It almost makes me wish I had a cat to keep me company!

reminds me of my dog sassy. She is there wherever I am. *s*

What part of timeshifting your posts didn't I understand? Had to run the week's worth all at once

Such a sweet Rocky!! Sometimes I think cats are more faithful than dogs...Enjoy you mini vacation!!hughugs

The great thing about cats is.. if they show you affection, you know it is true. He seems like such a good cat and quite the character. :-)

What a great cat. He looks a lot like one of ours. In fact, when the Queen saw the pictures, she asked, "Is that Boudreaux?"
He's the only one of our cats who's that schmoozy with us.

Cats are tricky. He's sucking out your body heat.