We had one of those freaky chance meetings occur on our recent trip. The first half of the occurrence took place on the day that we drove up the coast to Squamish. That was the twelfth day of our holiday, the day that we stopped at Porteau Cove Provincial Park on the mainland coast for a picnic lunch. I described some of it back here in Rambling and Roving. I also posted a number of photos that day, but here are two photos looking seaward from Porteau Cove that I rather like and eagerly share again. 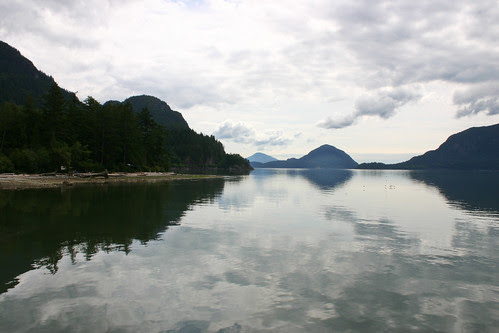 What I didn't mention back in my Sea and Sky post was that we met a very interesting fellow at Porteau Cove. He had the hood of his old Ford up, and I asked if he was having troubles. It turned out that he wasn't; he was just exercising a little preventative caution with his old jalopy. He appeared to be in his early thirties and must have been bitten by the travel bug, for not only had he been to many places, but he had pulled out the passenger seat of the old Ford and had a makeshift bed in the form of piece of foam angled from there into the backseat. He was travelling around that week, and that was his bed.

He was an interesting guy, had lived here and there and travelled hither and thither. At that point in time, he was living across Georgia Strait on Vancouver Island. On the next week, he was scheduled to take an Alaskan cruise with his grandmother, who was 87 and wanted to take this trip before her clock ran out. That was also to be the week that we were to cross over to The Island, and he seemed more than happy to offer up a few travel tips.

Fast forward ten days: we're on The Island but heading leisurely to the ferry to take us back to Vancouver where we would spend the weekend, our final days of the trip, with the girls. We opted to take the non-expressway along the coast. It was a pleasant drive, and at one point we pulled into a little park overlooking the sea. We had our scenic look, got back in the car and made for the exit.

Suddenly, I stopped. I turned to Cuppa and asked if that was the very same guy that we had spoken to on the previous week. She hadn't seen him, and I wasn't sure that I had either, but I had spotted something that resonated out of the corner of my eye in passing, so I backed up. It was, indeed, the very same guy! How weird is that: same stranger, ten days later, hundreds of miles and a ferry ride distance from the first meeting?

Once again we chatted. He had enjoyed a wonderful cruise with his grandmother. One day they took a helicopter ride to a glacier, and they surprised grandma with a birthday cake. How neat! We told him of our trip, and we parted, probably all shaking our noggins over the coincidence.

It was an interesting chance experience times two. I love it when things like that happen. Too bad we didn't get a picture or his name or think to inform him that he might someday be the subject of this blog.
Posted by Anvilcloud at 5:00 pm

It is chance encounters such as this that demonstrate how small the world has become. Of course, the convenience of fast travel is what makes it possible.
Great story!

I'm sure he would have been honored!

I just love it. Serendipity. Confluence. A combination of your being solicitous in the first place (you inquired about auto trouble) and then observant in the second.

Well - if the trend continues he'll stumble on your blog and on we go . . .

(The pictures are gorgeous)

Those are beautiful photos; I wonder what the odds are for that chance meeting to happen!!

He does sound like an interesting guy! I would have loved to do that in my younger years, buy an old truck, convert the backseat into a bed and just keep going.

Such a neat story. I wonder what he is up to now. Imagine taking a helicopter ride to a glacier. Imagine doing it when you are 87. :-)

Your beautiful photos make me want to burst our singing, "Oh Canada". What an amazing land we live in.